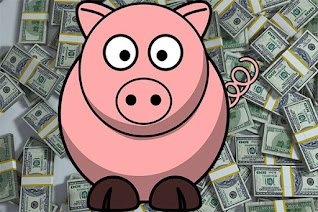 I don't care where you sit on the ideological spectrum, if you have ever given so much as a penny to a political campaign, you are probably getting a whole mess of messages like this right now;

Congressman Hogsnout needs your help desperately in the upcoming runoff in Georgia. If you don't send him x amount of dollars right now, the demise of Western Civilization will be sitting right on your shoulders. Are you sure that you want to live with that?

Jeez, really? You make a donation and they never stop hounding you. Left or right, please take a hike and get your hand out of my wallet. I will give when and if I feel like it. So F off.

Sort of like the phone spam that says "do not hang up," a clear signal to hang up immediately.

I used to be able to stream music on YouTube. No longer. Because after every video we have to hear this doofus wax on about carbs burning fat and his perfect body. Give it a rest, dude. Instant delete. 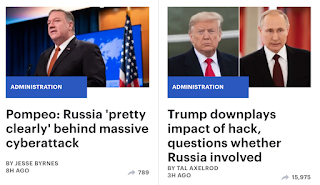 Like clockwork, Trump is downplaying the latest Russian cyber intrusion into the highest echelons of our country's military and governmental agencies. He just contradicted his own Secretary of State and predictably tried to slough the whole thing off on China.

Just exactly what do the Russians have on this guy? It has to be more than a mere golden shower on the Volga with a couple of Russian floozies. 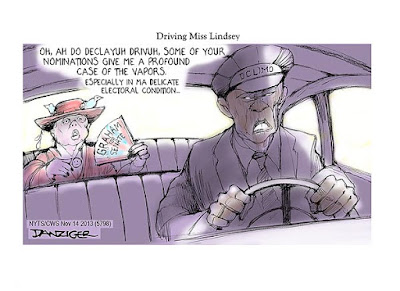 And what in the world do you suppose the Kremlin could have on Senator Lindsey Graham?
*
Amazing that the now pardoned Michael Flynn can suggest the imposition of martial law in order to force legislatures to appoint electors against the will of the voters and re-elect the President and nobody on the right utters a peep.
Posted by Blue Heron at 10:55 AM

Yes, I sometimes wonder why I have to keep paying my own elected representatives to represent me when they're already in office. They're all in on it, left and right. To quote some science fiction book or other..."the spice must flow..."

Trump is crazy enough now to try something like martial law and we can count on other surprises before he is shown the door. It really is up to the enablers to know when to tell the dude "no".