Who have I pissed off now?

I hardly ever go on Linked In but I got a notification last night and saw that one person had searched for me this week. Gee, I wonder who that is? 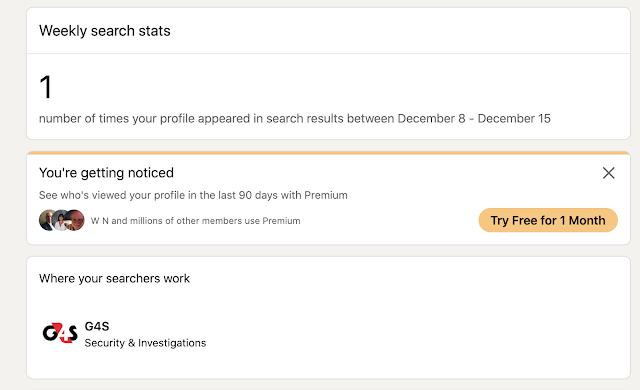 Well, that is odd, who are G4S Security and Investigations?

I googled them and my paranoia started ratcheting up. One of the largest intelligence companies in the world and one that specializes in Corporate Risk Services. Hmmm... And serious political intelligence work too. Like this. What in the world could they want with little old me?

The company was set up in 2004 when London-based company Securicor amalgamated with Danish business Group 4 Falck.[4] The company offers a range of services, including the supply of security personnel, monitoring equipment, response units and secure prisoner transportation. G4S also works with governments overseas to deliver security.[4]

G4S is the world's largest security company measured by revenues. It has operations in more than 90 countries.[5] With over 570,000 employees,[6] it is the world's third-largest private employer, the largest European and African private employer, and among the largest on the London Stock Exchange.[7][8] G4S has a primary listing on the London Stock Exchange and is a constituent of the FTSE 250 Index.

The company has been criticized and involved in numerous controversies.

The question, of course, is why are they looking me up? And I don't have the answer. But I have gone after my share of large corporations in my time on this blog, people like Granite, Monsanto and the energy companies as well as more than a few politicians. Could I have pissed somebody off? Or could this be tied to the debacle next door last month? I do not know.

Remember, just because I am paranoid doesn't mean they're not out to get me.

I’m sure they want to recruit you for intelligence work.

Hey Robert
G4S have a sound reputation in these parts for not being able to organise a piss up in a brewery so no need to be paranoid. Even if they did want you - which I can’t see - they would be guaranteed to fuck it up.
Px