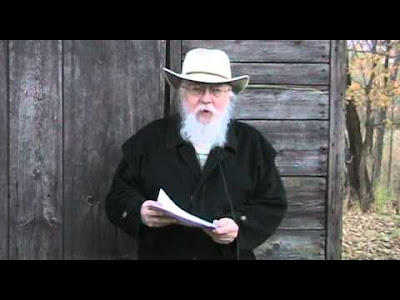 Peter Lamborn Wilson has died. I can not say I know a lot about him but I have seen a bit of his Hakim Bey stuff and find his output interesting.

Not that the man was without warts, he is accused of being attracted to young men, much like Whitman and Ginsburg.

Was he a pedophile, I have no idea? I wasn't there. Wouldn't be the first although it is said that he never acted on his impulses. He was never jailed or charged, as far as I know. I am going to let that one be.

His anarchist comrades held him in some suspicion because he was the recipient of a family trust. Wasn't poor enough evidently to have real street cred. And even worse, the family money was made on the backs of poor sugar laborers. Anyway, hard to please some people, especially the super woke.

Hakim Bey is the pseudonym for 59-year old Peter Lamborn Wilson, who has been based in New York City for most of his life, but is now living upstate in New Paltz. The Brooklyn Rail's interviewer, has this mistakenly reversed, giving Bey as the original name, Wilson as the pseudonym. The guy was born a WASP, and perhaps became Sufi one day while prowling the mountains of Asia. He has no occupation, and in 1994 told an interviewer (Voice Literary Supplement, New York, Feb. 1994) that he "thanks God that a trickle of family money keeps him 'independently poor.'"[1] The name Lamborn is rare in New York, and it is where the Sugar industry magnate Ody Lamborn died in 1971. It's been my impression that Hakim Bey's trust fund was originally earned by tormented labourers on sugar plantations. Whether it's from sugar or from something else, this brings us to Wilson's touching concern, about what he called "a class war situation" in the Rail interview : "Where's our support for the Mexican migrant agricultural workers?"

I have operated dangerous machinery in factories, carried lumber up flights of stairs, and I have (like most anarchists) done other boring, low-paid jobs to feed myself, starting around age thirteen. Still, I have known several anarchists who come from wealthy families, and I've thought well of them because they make the choice to use their privilege (freedom allowed by their trust fund) in good faith; perhaps to heal wounds made earlier by their own relatives. But Peter Lamborn Wilson gives me an unquiet feeling when he pretends to understand and hold concern in his heart for that other world, where he's never paid a visit, and where people work because they must work. It has the very phoney ring of someone pouring syrup into a liberal ear.

This line of thinking sort of cracks me up. If I remember correctly, the philosopher Thoreau was similarly ridiculed for coming out of Walden's pond to have his mother do his laundry on a weekly basis. And I think that the Thoreau family owned a pencil company.

Sorry guys, awful hard for a rich guy to make it to heaven, let alone make the grade.

The guy was pretty smart. I wish that I had read him sooner.