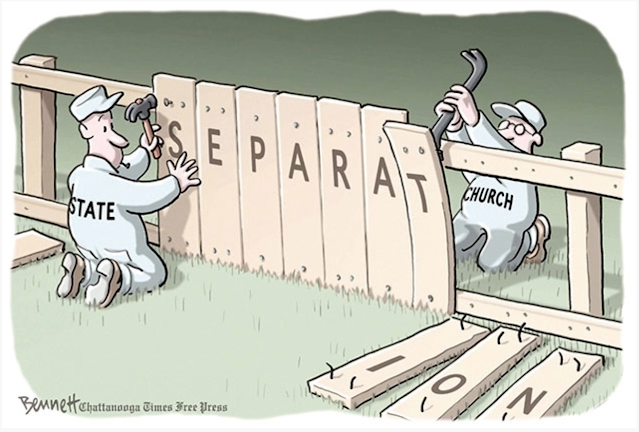 Not content to obliterate the last fifty years of reproductive rights freedoms, today the SCOTUS went after the separation of church and state. Now, if you are a taxpayer in Maine, your tax dollars will go directly to religious schools, including funding those schools that choose to discriminate against same sex teachers and students. You may not believe in discrimination against LGBQT but they do, so tough for you. You're paying.

Writing a dissent joined by Justice Elena Kagan and in part by Justice Sonia Sotomayor, Justice Stephen Breyer said the court had “never previously held what the Court holds today, namely, that a State must (not may) use state funds to pay for religious education as part of a tuition program designed to ensure the provision of free statewide public school education.”

And what defines a religion nowadays anyway? Some christian religions think that blacks and jews are subhuman species, but I am sure that they can get the government gelt too. Or is there a proscribed and government certified religious litmus test? No matter Mainers, you are footing the bill. Even if they are teaching what many of us consider to be second rate science fiction.  Or maybe slaughtering goats for voodoo rites.

This comes on the heels of a 2020 ruling that religious institutions like churches and schools are shielded from employment discrimination lawsuits.

The ruling arose from separate lawsuits brought by teachers Agnes Morrissey-Berru and Kristen Biel against two private schools that operate under the Roman Catholic Archdiocese of Los Angeles.

Biel accused St. James School in Torrance of unlawfully dismissing her when she requested time off to undergo surgery and chemotherapy for breast cancer. Biel died last year but her husband has continued the litigation on her behalf.

Morrissey-Berru brought an age discrimination case against Our Lady of Guadalupe School in Hermosa Beach after being told in 2015, just before her 65th birthday, that her contract would not be renewed.

Morrissey-Berru and Biel taught their students religion several days a week in addition to secular subjects.

Federal judges concluded that the ministerial exception barred both claims. The San Francisco-based 9th U.S. Circuit Court of Appeals subsequently ruled that both lawsuits could proceed.

Rachel Laser, president of the advocacy group Americans United for Separation of Church and State, said Wednesday’s ruling “demonstrates how the Supreme Court continues to redefine religious freedom - twisting what is meant to be a shield that protects us into a sword to harm others. The court elevates a distorted notion of religious freedom over fundamental civil rights.”

In a separate dispute affecting religious schools, the court on June 30 endorsed Montana tax credits that helped pay for students to attend religious schools, a decision paving the way for more public funding of faith-based institutions.

In another ruling on Wednesday, the Supreme Court endorsed a Trump administration plan to give employers broad religious and moral exemptions from a federal mandate that health insurance they provide to their workers includes coverage for women’s birth control.

Soon another ruling will come down the pike; the high school coach who likes to pray on the field after a game. There can't be any undue pressure on the players to join him, can there? Say if they want to play...

You need to go to Church!

Great essay. It is all so deeply depressing. I’m trying to imagine what supporters of these changes believe America will be like once abortion is banned, LBGQT books are banned from libraries, and there is no longer separation of church and state. Instant Nirvana? Suddenly everyone happy?

So depressing and so insane.

We are goose stepping’ backwards!
Time for the church to pay taxes like the rest of us…

The dark elements of American history, unacknowledged and camouflaged with a glorious mythology are keeping us from moving forward. White supremacy is the lynchpin of that actual history and those privileged by it rightfully see secular humanism as its antithesis.

It’s hard to believe that we, as a country, are still functioning.

ust an aside here. I taught (early '70s) for a year in a Catholic school in Columbus, OH (home of the Buckeyes!). Somehow, we got some state money, and it was nice to order some teaching materials that this K-8 sorely needed. It was in a very poor part of town, and offered black children and others who were not catholic a choice over the very dangerous and dead end public school in the area. I don't know how the church divied out $ to the schools. Anyway, I'm a firm believer in separation, but it did benefit kids, not all of whom were catholic.

Also, we all attended a period 1 "service", but there was, to my knowledge, no other indoctrination, and I could teach whatever i wanted in my science classes, including evolution and sex ed. I'm sure I didn't get into abortion or any other controversial subjects not suitable for middle school kids. Likewise, I don't recall any admin telling what or what not to teach.

The Age of Enlightenment has passed apparently.