What a day, what a week. I am emotionally spent. They are doing their customary victory laps over in rightwingdom. I have been reading National Review and Reason, the self congratulation over finally killing Roe is overwhelming. Between the god squad and the Josh Blackman's of this world it honestly makes we want to hurl.

If you are personally against abortion, there is a simple fix, don't have one. But that is obviously not enough, wayward women must be controlled and punished. They will birth even if it costs them their lives and it is definitely more likely that they will now in certain circumstances. Now that we are more like Malta than a free and secular republic. 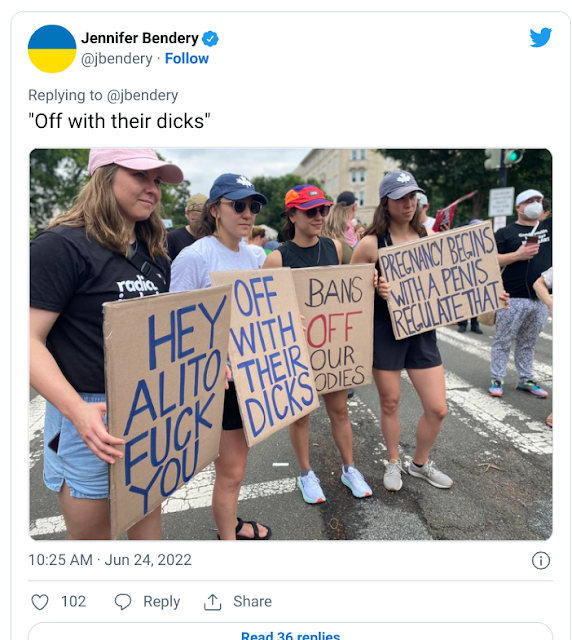 This decision and this Supreme Court were created through brute force and political chicanery.
Alito's opining that this will lessen division is laughable.
I think it is important to have a long memory and a scorecard.
Who has been caught lying?
Certainly Gorsuch and Kavanaugh. Barrett not so much, kept a poker face and said the usual bla bla. Mitch McConnell and the Orange one. definitely.
But slick Virginia Governor Youngkin, who pretended to be moderate and has been unmasked as anything bu,t deserves a special jail cell in Dante's hottest cell for his prevarication. He wasted no time trying to ramp up the new draconian abortionn law.
What an absolute lying phony. He is as morally repugnant and venal as DeSantis, if that is possible. Remember this from last year? He couldn't be straight about his position on abortion or he would lose voters.

RICHMOND — A liberal activist released a video late Wednesday of GOP gubernatorial nominee Glenn Youngkin saying that he has to limit his antiabortion comments on the campaign trail for fear of alienating Virginia's independent voters but that he would go "on offense" if he wins office and Republicans take a majority in the House of Delegates.

I guess the jig is up and the two faced son of a bitch can now go on offense. Damn them all.
Posted by Blue Heron at 8:09 PM

I am becoming active in the Virginia Democratic Party. While I can’t get pregnant, my granddaughter and daughter can’t say that.