I think I need to beat on this abortion thing one more thing before I try to put it to bed. I feel pretty raw about a lot of things regarding my country right now and I need to vent a little bit more.

I was triggered this morning when I read this pollyannaish screed by one Denise Burke, Women will thrive in a post- Roe world. Burke is senior counsel at Alliance Defending Freedom (@ADFLegal), where she is a member of the Center for Legislative Advocacy.

She engages in some outright bullshit here, a lot of dissembling and sleight of hand. I will not go through it line by line but I could. But let's look at this paragraph, which I have shortened to rid us of a non sequitur:

Abortion rights advocates imply that women are not strong enough or capable enough to manage motherhood and a job, school or other interests. But Americans never fully believed this...

They also argued that American women wanted unrestricted and unregulated access to abortion paid for at taxpayer expense. This bold assertion purposely ignores that many vulnerable women only reluctantly “choose” abortion after the financially incentivized abortion lobby convinces them that abortion is their only choice.

I call this the "You can have it all" speech. The Marlo Thomas effect. A woman can work, have a big family and everything is going to be wonderful. But women don't believe this because they have been brainwashed by a financially incentivized abortion lobby.

Two things. Look at the statistics of who is actually getting an abortion. The great majority are already parents. 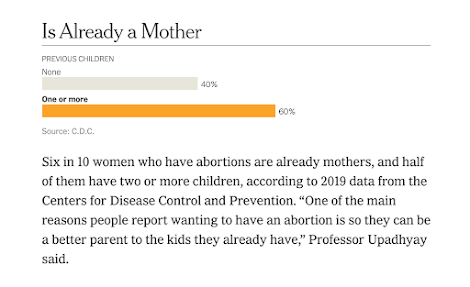 So who are you going to believe regarding this issue and in judging a woman's fitness and capability to become a parent (again), a lawyer at a pro life lobbying group or a mother herself? Who knows better what she can actually handle? 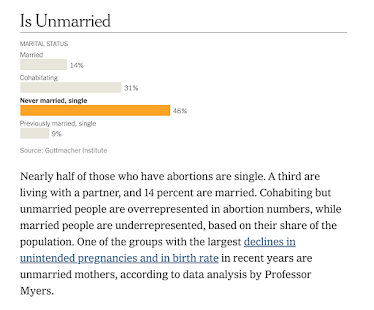 Is this not the most patronizing tone for Burke and her ilk to take, that women are stupid and gullible and have somehow been convinced by evil outside forces to terminate their pregnancies? That they couldn't possibly have come to this decision by their own calculus? These women tend to be poor and unmarried. But you are telling them not to worry, you can have it all. Get ready for another miracle. 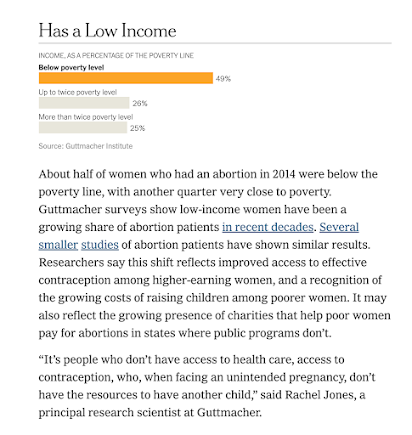 Have another kid.
Everything is going to be great.

Those "women against women" are the worst. I don't know how they can go through life and not have met another woman who hasn't had to have an abortion for any number of reasons. Maybe no other woman shared their story with her because of her condemning and uninformed attitude. I share your feeling of bursting indignation. ~ Diane O

It is one thing when religious people argue and advocate for this idea or that. No big deal.

Something changes when these same people become holier than thou and exert state control over people. There is a nauseating stink to a self righteous prigs controlling others. The arguments will fly all over the place but the question for me is : Will the reek of this be enough to move people?

I don't know, but the reality of this control over women could sink in and force action.

The way Republicans are viewed could get changed. Trump's legacy just got redefined by one issue. We will see if this spreads out to include his enablers. I am not too sure it will happen but we will see. BTW, can you smell that?