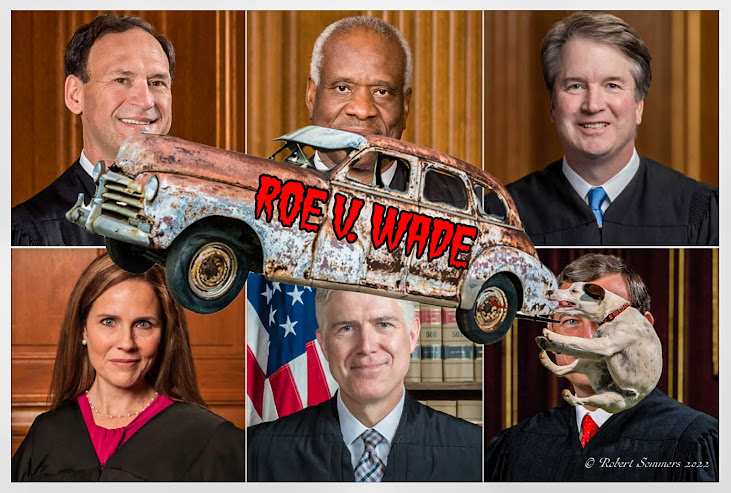 Amy Coney Barrett gave a speech a few months ago, where was it, the Reagan Library in Simi Valley? Anyway, she warned the crowd that a lot of decisions were coming down the pike that looked political but if you you read the language of the decisions you would see that it actually was just good, old fashioned jurisprudence. If you are to believe the newest member of the Supreme Court, nobody is trying for a "policy result."

Which is, of course, complete bullshit. The Federalist Society and their cohorts have been gunning for reproductive rights for the last fifty years. They have done nothing but gun for policy results. They have conspired with people like Mitch McConnell to not grant hearings to the Merrick Garlands of this world and they have been very successful. This is the most slanted court in memory and Kavanaugh and Barrett were coached by their handlers to be evasive and manipulate certain Senators.

Congratulations to them. You now have the political and theologically homogeneous court of your dreams, the current majority appointed by a succession of Presidents who have themselves failed to win a majority of popular votes. Any liberal decision of the last fifty years can now be similarly squashed for not being "historic" enough or lacking papal dispensation.

This is the most politicized court I have ever seen, you have the wife of one jurist openly involved in patently illegal schemes to throw Presidential elections. The guy in the top middle in the picture above, the one lone dissenter who voted to shield Donald Trump's communication with his co-conspirators from public light.

Support for reproductive rights and a woman's right to choose has never been stronger in America and it grows daily. What is it now, 65%? So you conservatives have managed to get your plum. Good for you. It will be interesting to see how America and women in particular respond at the ballot box.

Doctors are said to be afraid to treat expectant mothers with birth abnormalities and risk prosecution if the fetus dies, watch women's health suffer and casualty rates soar. Also watch rapists and family members who have committed incest sue women over their paternal rights to their children. The effects of this ruling is certain to fall hardest and most disproportionately on minority women.

Data from the Guttmacher Institute and the Centers for Disease Control suggest that Black patients account for close to one in three abortions in the United States. Hispanic women also are over-represented.

Some advocates also worry that as states enact laws criminalizing abortion, people of color will also be disproportionately targeted for prosecution.

So be it. God's plan, I suppose. You have caught the abortion car, now let's see what you do with it. And what a mockery you have made of our nation's constitutional order and any respect for law, fairness and decency. A pox on your house, I hope that the blowback is swift.