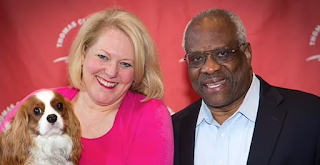 Clarence Thomas, having helped eviscerate Roe, now writes that he has various other sights in his target, unenumerated constitutional rights which include same sex sexual behavior, same sex marriage and contraception.

Wonder why Clarence left out the Loving v. Virginia case, which allowed mixed race marriages? They're not mentioned in the constitution, are they? Sounds like the Justices like to pick and choose when it is politically convenient for them. What a surprise.