Vlad the not so good 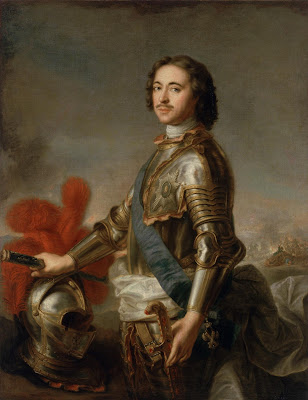 Have we humans learned anything from history? Doubtful. But we are really exceedingly good at repeating the same mistakes over and over. And we often forget that we live amongst lying wolves, until of course, they visit our own door or leading our or somebody else's country.
A sovereign nation is getting close to getting completely annihilated and it rolls off our backs like water off a duck. We are seemingly only concerned about our own groceries and gas tanks. That it is somebody else's problem. And it always is, that is until it becomes your problem.
Vladimir Putin has announced that he is the second coming of Peter the Great and is ready to readjust the borders with his neighbors.

He has openly compared himself to the Russian tsar, equating Russia's invasion of Ukraine today with Peter's expansionist wars some three centuries ago, and making his strongest acknowledgment yet that his own war is a land grab. Russia's president was meeting young scientists and entrepreneurs when he made the remarks. Before talking IT and tech development he talked politics and power: the new battle he sees for geopolitical dominance. In that, he told his select audience that Peter the Great was a role model.
"You might think he was fighting with Sweden, seizing their lands," Mr Putin said, referring to the Northern Wars which Peter launched at the turn of the 18th Century as he forged a new Russian Empire.
"But he seized nothing; he reclaimed it!" he said, arguing that Slavs had lived in the area for centuries.
"It seems it has fallen to us, too, to reclaim and strengthen," Mr Putin concluded, with a near-smirk that left no doubt he was referring to Ukraine and his aims there. Peter's rule, he suggested, was proof that expanding Russia had strengthened it.

Remember how he originally said he was trying to stamp out nazism next door? Forget that, it was a ruse and a lie, he is finally coming clean.

When Russia invaded its neighbor on 24 February, Putin falsely claimed it was a "special operation" limited to the eastern Donbas region to "de-Nazify" Ukraine and reduce the supposed threat to Russia.
But even as he was uttering those words, his troops were moving on Kyiv and bombing land even further west. More than 100 days later, a fifth of Ukrainian territory is under Russian military control, with puppet administrations who talk of referenda on joining Russia.
And now Putin feels bold enough to admit that his "operation" is in fact an occupation.
He also seems to believe the West will ultimately accept the reality his troops are fighting to create on the ground.
At the time, "not one European country" recognized Russia's claim to the land where Peter created St Petersburg as Russia's bold new capital, Mr Putin said. Now they all do.
His comments have also rattled the Baltic countries. The Estonian foreign ministry summoned the Russian ambassador to condemn his reference to Peter the Great's assault on Narva, now in Estonia, as Russia "reclaiming and strengthening" its territory.

The people in the Ukraine are in big trouble. They are losing too many people, ready to fight to the last man. Their ammunition is running out. They are getting wasted by superior firepower. And that is perfectly fine with some of their neighbors and some Senators and congressmen in America, people like Rand Paul and Thomas Massie. 57 Republicans voted against a weapons and humanitarian aid bill to Ukraine.

The euphoria that accompanied Ukraine’s unforeseen early victories against bumbling Russian troops is fading as Moscow adapts its tactics, recovers its stride and asserts its overwhelming firepower against heavily outgunned Ukrainian forces.

Newly promised Western weapons systems are arriving, but too slowly and in insufficient quantities to prevent incremental but inexorable Russian gains in the eastern Donbas region of Ukraine, which is now the focus of the fight.

The Ukrainians are still fighting back, but they are running out of ammunition and suffering casualties at a far higher rate than in the initial stages of the war. Around 200 Ukrainian soldiers are now being killed every day, up from 100 late last month, an aide to President Volodymyr Zelensky told the BBC on Friday — meaning that as many as 1,000 Ukrainians are being taken out of the fight every day, including those who are injured.

Where will Russia set its bombsights next? Moldova? Estonia? Poland? Finland, Sweden? And what will it take for the civilized world to take a stand? The cat is out of the bag, this insane despot is willing to fight the long war and recapture Russia's historic former glory, no matter how many innocent civilians get slaughtered and sovereign countries are invaded. He murders journalists and political opponents with all the empathy of a cat torturing a small mouse, like a psychopath. And we continue to read the sports page and follow the Kardashians.

“It is easy for you and for me to shrug our shoulders and to say that conflicts taking place thousands of miles from the continental United States, and, indeed, thousands of miles from the whole American Hemisphere, do not seriously affect the Americas — and that all the United States has to do is to ignore them and go about (our) its own business. Passionately though we may desire detachment, we are forced to realize that every word that comes through the air, every ship that sails the sea, every battle that is fought does affect the American future.” FDR 1939

I lost too many family members in the camps and pogroms to count. The Coughlins, Lindberghs and Chamberlains of this world preached anything from pure isolation to open support for the Axis. And we sat on the sidelines here in America for far too long. Until December 11, 1941 four days after we were ourselves attacked. How many lives would have been saved if we had made a more difficult and moral choice sooner, say three years earlier?

But people are only guided by their own narrow self interest. They can not empathize with other people's misery and pain, especially those across an ocean, a continent away.

I remember watching a movie filmed in Poland a number of years ago. They asked Poles how it felt when they saw their jewish classmates hauled ou t of class and put on the trains to the extermination camps. One man cried, unloading a cascade of repressed tears and pain for the loss of his friends. But the next woman's response was even more telling.

She said that, "It was wonderful, there were more potatoes for the rest of us." I will never forget that.

When I hear people bitch about the current state of our economy, or inflation, I have to think; let's settle down, we have just faced the most cataclysmic virus in the last 100 years, one that killed 15 million people and paralyzed the global economy and a Trump administration that put the country $7.8 trillion dollars in debt. Russia is currently embarking on an expansionist war against sovereign neighbors. And all we can think about is our most mundane and banal personal fortunes.

An asteroid could wipe out half the earth and we would maybe shed a quick tear and then head right to the website to make sure our investments hadn't dropped a tick, that beer prices were stable and that reception was still available for the big football game. We are so narcissistic, nothing is really important enough to pierce our teflon solipsistic bubble.

We can not see past our own noses and also lack the cognitive facility and intelligence to learn anything whatsoever from national and global history. We make the same mistakes over and over again and then throw our hands up and feign helplessness and blame fate, or god, even when some things could be averted with a little gumption, compassion, will and backbone, not to mention moral repugnance.

Things just go round and round. Nothing ever changes.
Posted by Blue Heron at 5:00 PM