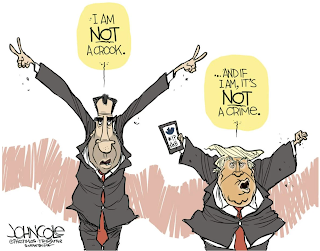 I haven't been grabbing a lot of the low hanging political fruit.

You can find it everywhere and anywhere, stay perpetually angry if that is your desire, many good triggers available, whatever your political inclination.

Ginni and Clarence, DeSantis, Meadows, Loudermilk, Boebert, Barr, Greene, Trump, Sleepy Joe, take your pick. I don't really feel like wading in up to my hips but I will stick a little toe in the water.

Donald Trump sent a 12 page rebuttal out the other day regarding the January 6 hearings in which he makes one supposition that I haven't really heard anyone challenge. One that I find both pernicious and utterly racist on its face.

Joe Biden, a candidate who never left his basement and can’t speak without a teleprompter, outperformed Barack Obama and Hillary Clinton in their two high-charged elections. Biden even outperformed Obama in black communities, but only in important swing states. Isn’t that amazing? It’s impossible.

Apparently, Joe Biden is twice as popular in Arizona as Barack Obama, even among black and Hispanic voters. Sleepy Joe earned a total of 1,040,774 votes in Maricopa County,Ariz. (Phoenix). That’s 508,490 more votes than Obama earned in 2012 (532,284), nearly doubling Obama’s 2012 performance in the key swing state. Biden’s unbelievable success of out performing Obama continues in Las Vegas, Nev., Madison, Wisc. , Green Bay, Wisc., and a number of other cities across the country. It didn’t happen.

If you need me to break it down, what he is basically saying is that Biden could not have won on the square because he received more minority votes than Obama did. Think about that? He is saying that identity politics and racial considerations are the only paramount calculus for voting in this country. How venal and racist is that?

Either there’s a lot of black voters in America who identify more with Joe Biden than Barack Obama, or Democrats are stealing black votes – and we all know the answer to that.

Like a black person can't identify more with Biden than Obama? Hey, some blacks even supported you Donald, how crazy is that and how do you explain that in your convoluted reasoning and passel of ad hominem slurs?

There is of course a better explanation. Minority votes were not necessarily pro Biden, they were merely anti Trump. The ex narcissist in chief just can't wrap his head around that. Many of us, myself included, regardless of our pigmentation, would have voted for pretty much anybody but you. And isn't it funny that all that voter fraud you talk about only happens in states you lost and often other Republican candidates in those same states won their races in the same election cycle? How does that work?

Phil Bump at the WaPo has a good take in his article Trump issues 12 page greatest hits collection of is false fraud claims.

Since the election ended, Trump has fumed at the fact that Biden got so many more votes than he did. He’s complained repeatedly about how Biden held no events but “supposedly” got more than 80 million votes?

The explanation, of course, is simple. First, the country’s population grew 9 percent from 2008 to 2020. Second, a lot of Biden voters weren’t motivated by Biden but by Trump.

But Trump refuses to accept that. So he does things like wonder how Biden did better in Arizona than did Barack Obama in 2008, since of course Obama should have outperformed Biden when running against … John McCain, the senator from Arizona.

Donald Trump has done one thing for America, with his outright lies, utter falsehoods, gaslighting and racial antagonism, he has shown us the worst thing we can be. And unfortunately we have performed as poorly as can be expected.

Couldn't agree more. Biden benefited by having The Orange One as his opponent - 60% of the country had had enough of Trump. That other 40% worries me still.

It is obvious that Trump does not have the brains or ability to put his response together. It just shows that the evil that surrounded his presidency is still there. Your review is right on about voting against the Orange made Biden president, but we do still need to worry about his supporters and what they will do next time.

As a human, I identified with and voted for Biden. Trump? I don't identify with self serving dicks.

Certainly, Trump did not write that… he would have no clue on how to research or structure that….