I went looking for a shot this morning. I had taken the picture on the road to Yosemite sometime in September of 2011. 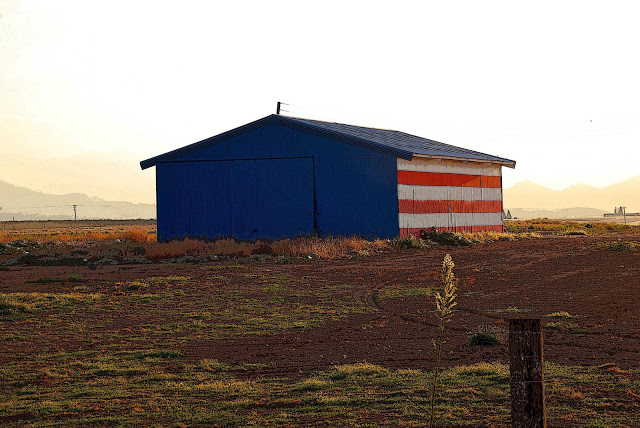 I had always liked how the patriotically painted building looked in the morning haze.

But I was never entirely happy with  never liked my clumsy processing and thought about having another go at the raw file this morning, was I was even shooting raw back then? Have way better tools in my quiver now.

Turns out that it was one of the six thousand or so shots I lost forever when my hard drives and backup systems crashed about five years ago.

Had to find it on the blog to retrieve it. Can no longer work on it. The point is, if I have a point, is that you never know when life is going to throw you that curve ball, the lightning strike on the golf course, the plane that flies in to your house in the middle of your parcheesi game, an errant North Korean missile, you get my drift. First thing you know, it is the last thing you know. Good to have a permanent record of some things.

My friend Barry, the funny guy, thinks I need to self publish a book of my posts. Says it is easy to do. He believes that I am a good writer. My feeling is good maybe, prolific, definitely. I have written, as of today, 8461 blog posts on the Blue Heron Blast. Some mysterious virus hits my left rutabaga lumbago and in six months Google shuts me off and the whole thing disappears from view forever. Do we want that to happen? We do? Okay then...

Well, in case you change your mind, I'd like to propose we put something out with your favorite shots and stories, so you can remember the old scribe when I am taking the long dirt nap. Write me and let me know if there is some favorite thing that tweaked your noggin and needs permanent preservation or a photograph that was meaningful to you and I will dutifully consider it for inclusion. This blog has been a major effort in my life for twelve years and many of you have been with me every step of the way. Should we just let them pull the plug?

I don't think I need to include all that much. After all, J.D. did fine with just nine short stories, of course I'm no Salinger. More like Pierre Salinger. I saw a billboard coming back from Lake Arrowhead, that Deep Purple and Steve Miller are playing at the local casinos. Deep Purple's Long Goodby Tour. I thought sheesh, what's wrong with a short goodby? Stop already. How can we miss you if you won't go away?

It's depressing really. Someone wrote an article which I did not read, but the skimmed over headline said Every rock star you have ever loved will soon be dead.

Very cheery, but unfortunately somewhat true, with the admittedly subjective nature of the word soon. I admit, someday I want them to argue if a Robert Sommers even existed, I am sure that some hapless scholar will one day attribute the actual authorship of the blast to Edward de Vere, the twenty seventh Earl of Oxford.

You think there is any chance we could crowd fund a book before the light goes off? Help me out here. Because one day, Poof!

I'd kick in a few bucks, even tho I'm something of a newcomer. I learn a lot about Fallbrook and the San Diego area every time I come here. I think your knowledge about this particular area would be of wide interest. Everybody loves California. ~ Diane O

Crowd funding could work to produce a book. I think you have enough readers to do it.

I'm not sure Edward de Vere was a Nikon guy. I read his story on Wikipedia.

Joseph and I are definitely in. Crowd fund away and don't leave anything out. Every word, rant and shray-fest , geshrey of yours is worthy.

Check with Laura at Nat's...she is doing marvelous things producing the booklets for the shows at the gallery and should
tell where she is economically getting them printed.

But remember the dedication to, and massive inclusion of, Scrota's wisdom.

The first thing that came to my mind for favorite blogs was something that really made me laugh and that I still have to chuckle about.

I recall it as having been very brief. You were with Leslie at the mall. She was shopping and you were sitting watching people go by. You said something like: "All the young women passing by have tattoos on their ankles to express their individuality." It so so suddely (I can't spell this word) sarcastic and so very true. I loved it!

I have no idea how 'bad' your cancer might be, what your treatment plan is, or your prognosis. But I hope it just all turns out as good as it can be. You have beat this before...