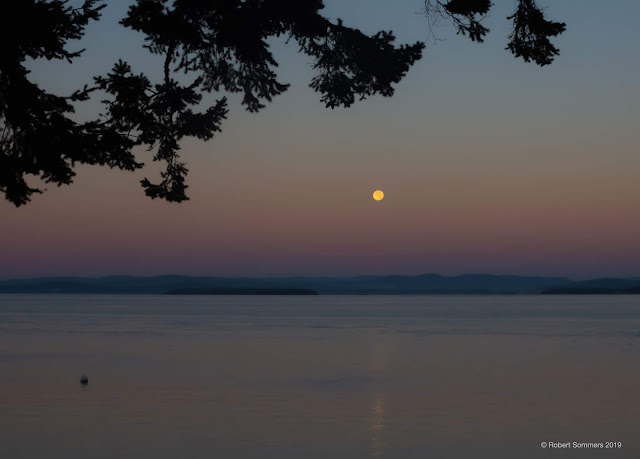 I get a daily email from Word Genius called word of the day. Feeds you odd words. Today's word was syzygy.

A greek word from the 17th century, Syzygy has two meanings. In a physical, cosmological sense it is the straight alignment of three heavenly bodies as in an eclipse. In a human, interactional sense it describes a situation where two people, ideas or events are confluent or in alignment, either alike or in opposition.

I was not familiar with the term but I find it curious, etymologically speaking. Because rarely would a word be binary in one meaning and ternary or trinary in another. Wonder how that happened?

I looked it up, hoping to find further information.

This definition describes the astronomical relationship as one of conjunction or opposition, basically as a binary proposition.

And I find a different binary meaning in biology, Syzygy, the pairing of chromosomes during meiosis.

Syzygy comes from the greek word syzygos which derives from syn (together) and zygon (to yoke).

I found another astronomical definition of the word that relates to two rather than three - Either of two points in the orbit of a celestial body where the body is in opposition to or in conjunction with the Sun.

I may never figure this one out.
Posted by Blue Heron at 10:06 AM

Got this letter from my greek / latin university professor buddy, Denis:

The greek word zeugos or yoke is a very important root: Greeks were farmers using oxen and the most important of the Athenian categories of citizens were zeugeteis or yokers farmers. To be a citizen is to be yoked to other citizens, to work together both in the state and everyday life and in battle in the phalanx with other citizen soldiers. The upper class were called hippeis or horsemen. They fought as cavalry as they could afford to own and breed very expensive horses and valued glory over communal action.

Thus sun zeugos syzygy working together is the basis of the state and the good life and the protective role of citizen soldier, perhaps the most important concept underlying the polis or organized life in a city.

Hope you are doing well,