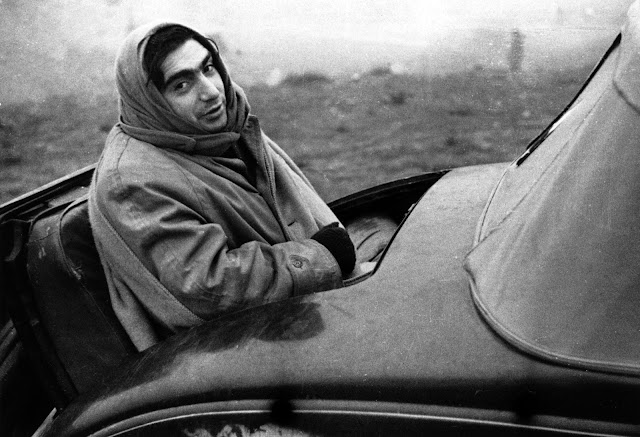 As I mentioned the other day, I really enjoyed reading the Kati Marton book The Great Escape.

All of the people portrayed were fascinating but perhaps none so captivating as the war photographer Robert Capa (1913-1954.)

Capa was arguably the greatest war photographer the world has ever known. Born Endre Friedmann in Budapest, he made his reputation in the Spanish Civil War.

His capture of the shooting of the Spanish loyalist soldier in 1936 was so perfectly timed that many thought it staged.

In World War II he covered action in Sicily and Africa for Life Magazine. His photographs of the Normandy Invasion were harrowing and groundbreaking. His personal motto was “If your pictures aren’t good enough, then you aren’t close enough.”

Ken and I saw many of his iconic photos at an exhibition at the Annenberg Center a few years ago and they were incredibly powerful. He ended up dying covering the war in Indochina, killed by a land mine. Guess the way these types would want to go, not sitting in an easy chair somewhere.

Capa fled his native Hungary during some very tough times for Jewish people. He ended up in Berlin and then fled to Paris where he shared a darkroom with Henri Cartier Bresson. In Paris, Capa started collaborating and had a romantic relationship with Gerta Pohorylle, who changed her name to Gerda Taro. Taro lost her life horrifically in the Spanish Civil War.

The name Capa was derived from Friedmann's Budapest street nickname "Cápa", which means "Shark" in Hungarian.  Pohorylle adopted the professional name of "Gerda Taro" after the Japanese artist Tarō Okamoto and the Swedish actress Greta Garbo.

Although he sometimes used a Leica, much of his war photography was captured with Zeiss's Contax II. On an odd note, Capa was born with an extra finger on one hand, one of which was surgically removed. An essay on the photographer by his brother here.

Why did he change his name?


In a radio interview in 1947, Robert Capa explains why he made up this fake persona:
“I had a name which was a little bit different from Bob Capa. The real name of mine was not too good. I was just as foolish as I am now but younger. I couldn’t get an assignment. I needed a new name badly” So Capa came up the idea of making up a fake name– and shares why he chose the name “Robert Capa”: “I was figuring on a new one… Robert would sound very American because that was how somebody had to sound. Capa sounded American and it’s easy to pronounce. So Bob Capa sounds like a good name. And then I invented that Bob Capa was a famous American photographer who came over to Europe and did not want to bore the French editors because they didn’t pay enough.. So I just moved in with my little Leica, took some pictures, and wrote Bob Capa on it which sold four double prices.”

*
The issue of changing your name and morphing your identity is an interesting one and something both sides of my family engaged in. They lived in far more troubling times than we do today. There was a huge stigma and need to assimilate at a certain time for Jewish people. Hey Winona Ryder picked her last name out of a book, Winona Horowitz lacked a certain cachet or might have caused her some trouble getting parts. No problem with me.

*
But I would like to show you a painting in my gallery by the great French Impressionist Andre Gisson. 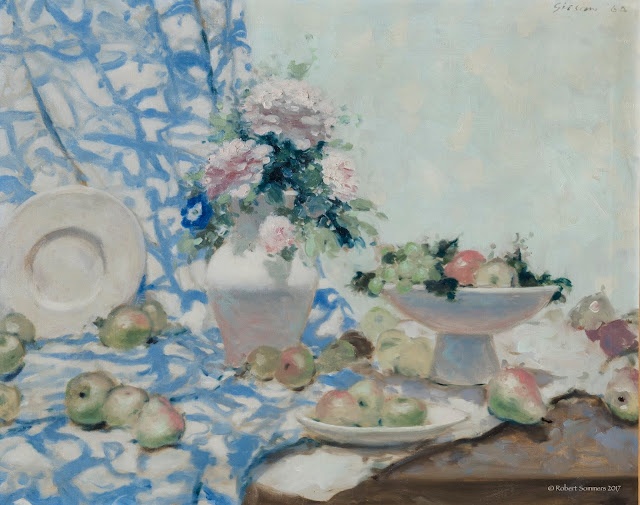 Andre could paint like a son of a bitch. But his name wasn't really Andre Gisson. And he wasn't a Frenchman. His name was Anders Gittelson and he was from Brooklyn. Jewish kid. Born in 1921 and raised poor and basically destitute, he was a struggling artist but he had an idea. After graduating from Pratt and serving as a captain in Europe in World War II he reinvented himself and got older. Not only did Andy become Andre, he put eleven years on his age on his identity papers so that he could position himself as a period French impressionist.

Now that is dedication.

*
It reminds me of an old joke: A Jewish immigrant landed at Ellis Island in New York. The procedures were confusing, and he was overwhelmed by the commotion. When one of the officials asked him “What is your name?” he replied, “Shayn fergessen,” which in Yiddish means “I’ve already forgotten.” The official then recorded his name as Sean Ferguson. Oy.
Posted by Blue Heron at 6:42 PM