I have given the world my songs 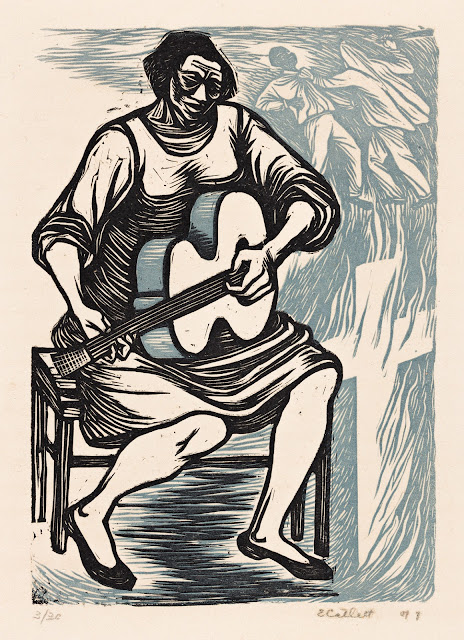 One of the rarest and most powerful prints in my collection goes up for auction next week in New York.
Part of the I am the negro woman series, this is a print the great Elizabeth Catlett (1915-2012) pulled in 1947, an early edition of thirty. She was an expatriate in Mexico City at the time, working with the Taller de Grafica Popular, aka TGP.
Supposedly the first edition was created with mixed grades of paper and very few survived. This one, the third print pulled, is exceptional.
Catlett reprinted the lino cut in 1989 but the later color she picked was quite garish, at least in my opinion.
I like this soft periwinkle hue, reminds me somewhat of Ben Shahn's palette.
Although it has never been confirmed I believe that the guitar player is left handed "freight train" guitarist Elizabeth Cotten reciting her life's narrative, which you can see if you have eyes and I have no further need to embellish.
I hope that the print kills on December 10th! Actually I hope it sells at all but I believe that it will, there are already twelve potential bidders. I wonder if it will go to a collector, museum or an academic institution?
Perhaps someone that owns the later version will pony up for the sublime original! I feel honored to have found and owned this print.
Posted by Blue Heron at 6:17 PM

Wow. That is very cool!

Man, what a great rarity to have owned!

There is a simpler solution to the left handed guitar player in the Catlett print. Since it's a linocut, when printed the original drawing that she did on the linoleum will be reversed. I got a phone call from friends asking why the Xmas cards they were making were printing LEON.