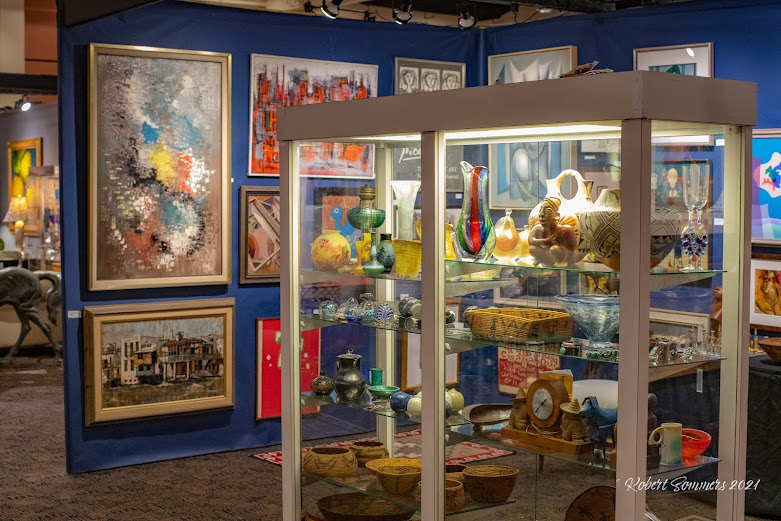 I am back from the desert and the Palm Springs Modernism Show. 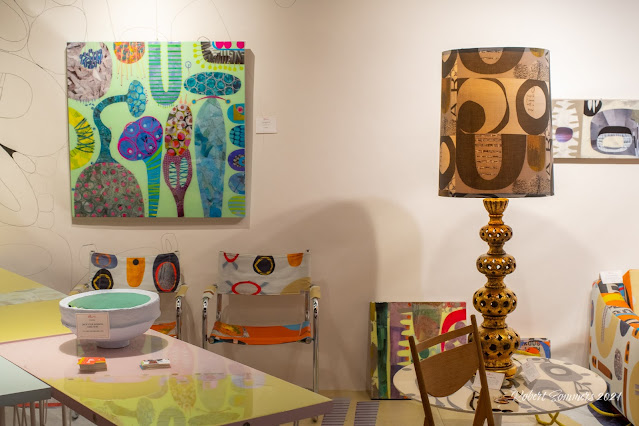 It was rewarding on every level.
I think my pals Cam, Bill and I approached it the right way, bringing a large selection of affordable smalls to the show.

Some dealers were less fortunate, betting on a more high end buyer that may have not ever appeared. 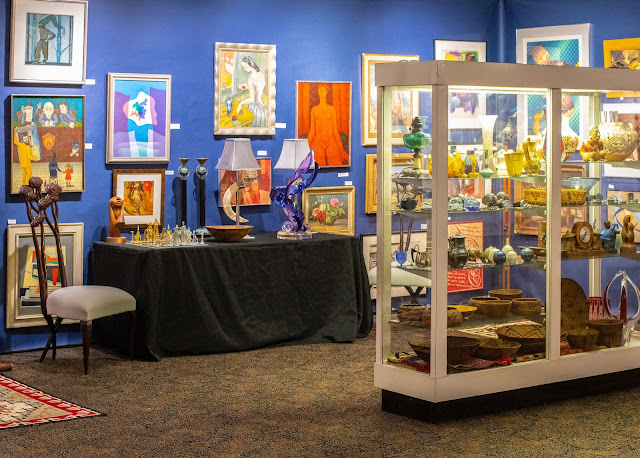 Although we certainly had higher priced items as well, I think it is important that people don't feel priced out and that I can offer something less expensive but every bit as wonderful so that everybody goes home happy.

I think we accomplished that. 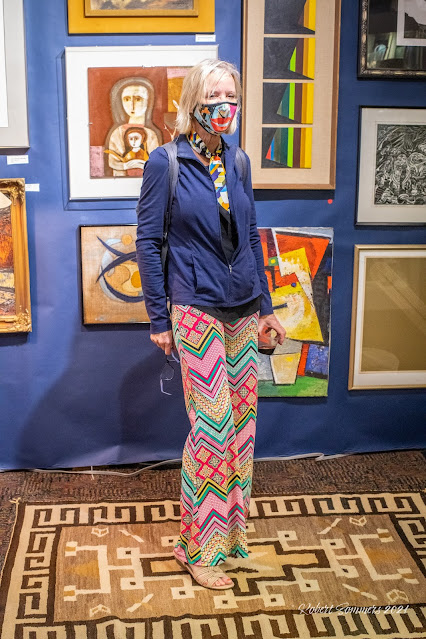 And honestly, some of the merchandise is stuff that I frankly abhor but guess what, that is immaterial. People like it, I will find it and sell it to them.

Peoples' tastes and palette have changed and I am trying to give them something that they want, godawful as it might be in the final analysis.

Still, I did something I have never done before at a modernism show, I introduced a large quantity of native and ethnic material.

It was very well received and I got to sell things that I actually loved too.

Amazing how well good design will integrate, regardless of the period and vintage. 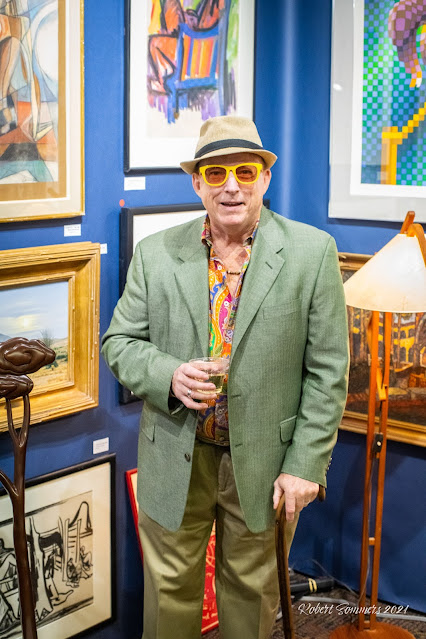 I didn't take a lot of photographs this year. I was busy all the time and I probably brought the wrong lens, my nikkor 55mm ƒ1.2 manual focus. Too tight. 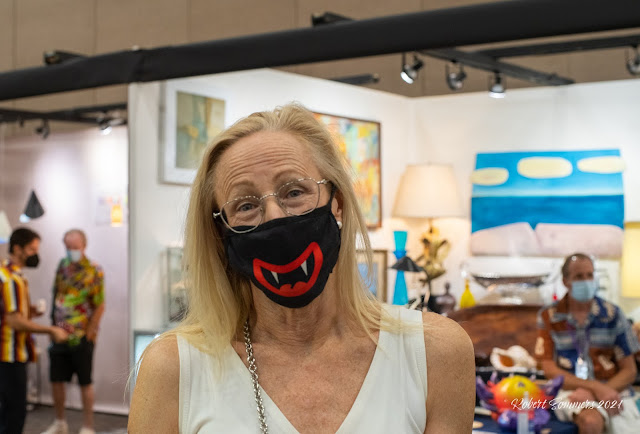 Lot of my regulars skipped this year for some reason, no Barone, not sure why.
I sold a ton of stuff. Quite surprising. This is supposed to be the weaker show compared to the February, guess what?
Anyhow, I am tired, was exhausted white knuckling the loaded van home through heavy traffic. Got back around ten, think I was doing about 45 on the freeway at the end, completely spent. I have new clients coming Wednesday and I have to jam on putting the place back in order tomorrow, made some headway today. 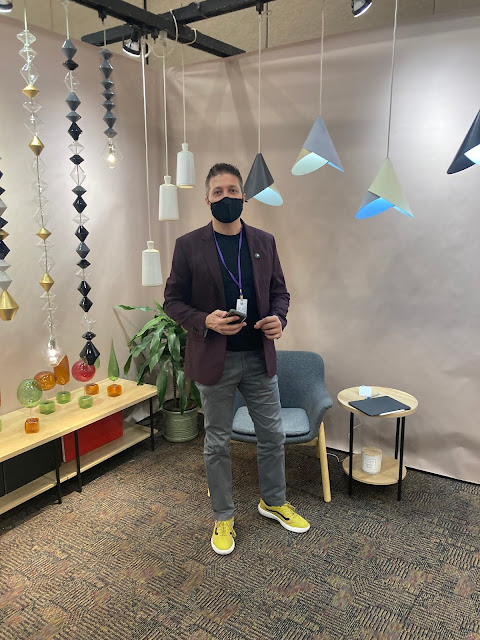 Couple things about the weekend. First the funny thing.
An Italian man who designs and manufactures lighting was across from me with his husband. Wonderful pair.
But I cracked up when I saw their sign and the name of their company.
Unapologetically Italian. 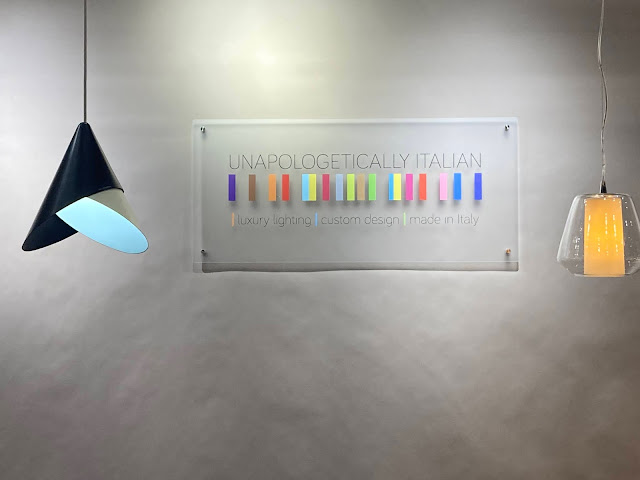 I told them that they had just given me the name for my newest company, Reluctantly Jewish.
*
There is a design style in Palm Springs that is all its own, a mixture of fifties, gay, desert and tropical. The color palette is heavy on the ochre, orange, fuchsia, pink, turquoise and olive hues. I think after a suitable period of time has eclipsed all residents who make the grade are presented with a straw homburg or fedora and an honorary retro plaid jacket. You get penalized for socks. 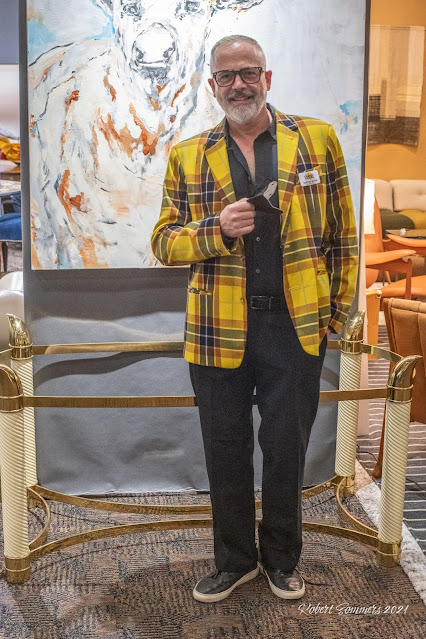 It is a place where people like to have fun and play dress up, not much different than what we did back on the dead tour or playing pirates as kids, but with much more style and panaché.
Let it go and outrageous wins the day.
I am not sure if these people dress like this when they go back to their weekday house in Los Angeles but I think there is a sartorial freedom in Palm Springs that makes them want to let it rip.
Good for them.
What I find most interesting, from a sociological perspective, is that these retro cosplay hipster mid century modernists are largely existing side by side with a sizable number of homeless people.
You often see them together on the same street, the Jetson clown car meets the down and out.
Homeless in the desert looks to be much worse than homeless in New York or Seattle or San Francisco or even Fallbrook.
Some of these folks look very scary indeed, full face tattoos and obvious overuse of numbing agents. Feral and dangerous. I typically give these people a wide berth.
It is flat here, and ungodly hot, the homeless can not hide or be swept away and the extreme elements and severe heat have a way of quickly desiccating and destroying both body and soul.
This sometimes takes on a cartoonish wolves and sheep juxtaposition on the street as the respective worlds collide. One that is not funny in the least. Everybody trying to survive in this world and not get hurt, by elements or by bigotry. Strange outpost of co-existence.
Anyhow Bill and I were sitting at Sherman's eating breakfast and a woman in black appeared on the corner. 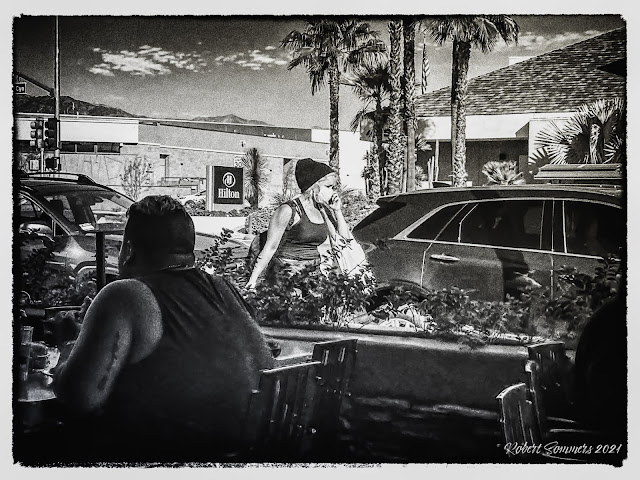 I signaled to him to check her out, Bill being a keen appraiser of the human condition.
She had a large and small suitcase as well as several bags. But she was remarkably clean. Looked normal emotionally but in a bad way. She was talking loudly and nervously on her phone, plainly traumatized. Whatever had occurred to this poor woman had happened within hours or minutes.  We watched in saddened fascination as a grizzled gutter snipe circled around the potential new mark.
I was wondering to myself, did a spouse or lover throw her out, had she been recently evicted or lost her job? This poor lady was plainly going through it and she looked very new to the homeless condition or lifestyle, if that is indeed what she was going through. Black would not be the ideal color to face the desert in and her skin was still clean and unblemished. At the worst, this would be very hard indeed.
I will never know the answer to the question but I firmly believe that we witnessed zero hour of the descent, a spiraling dive that can take any of us and spit us out broken in mere seconds.
We paid our bill. I looked for her when I walked to my van, thinking that perhaps I could intercede and at least give her some money. But she was gone. Bill later told me that he caught some of her conversation on the way to his van and that our guesses were apparently on the mark. She was crying and our fears were confirmed.
If this unknown woman has a fall I do hope that it is a temporary one and that she rights her ship really soon without too much trouble or pain. The desert is a terrible place to be marooned alone without a home or friend.
*
He came alone on Saturday, not with his wife as was customary. I have known them for years.
He bought a lovely Corita Kent serigraph from me, pencil inscribed Flowers for Mary, his wife's name. Sunday they came in together. But she looked very different.
Her neat black pageboy was gone, her hair now gray. Something had clearly changed.
I asked her what was going on in her life?
Mesothelioma, an incurable variety. Now everything made sense. We hugged and shared and talked. Hopefully I was able to impart something helpful from my own experience.
Live every day as if it was your last and let the people you love know that you love them. Repeatedly.
Posted by Blue Heron at 5:34 PM

I'm so glad to hear you had a good show! I always enjoy the people photos. Manual focus is not at all bad!!

Your compassion shines through this article… especially with regard to the traumatized person and also with your affectionate characterizations of your colleagues. 🙏🏽

Debbie
Wonderful reflections, heartfelt with clear visions of reality in the desert. Homeless are in a different league there and crime is horrific and awful - hard to explain - unwaveringly deviant. Humanity at such a low it’s hard to accept as real.
Your idea to draw more buyers in with smaller purchases is great and could result in them growing their future purchases as a result of a stepping stone of opportunity. Bravo. Loved this blog segment!