My friend Jack loves Fallbrook history, as I do. I saw him roaming the street the other day, checking out the buildings with keen interest and asked him what was up?

Jack confided to me that he bought a collection of old photos and negatives of Fallbrook online recently. Included were two pictures of my block that as far as I know, nobody alive today has ever seen before, circa 1918. Fellows pitching horseshoes. He was trying to line things up and make sense of them.

Evidently, at one time either my building or the lot next to my building was home to the town's horseshoe pit. It was news to me.
Also note the old gas pump in front of the Mercantile store. The cornice on the top of the Mercantile can still be seen on the back of my roof today. I thought that the small store with the awning was Mrs. Barkow's building, but I don't believe so now after analyzing this more carefully.
I know my building was moved off the corner around that time and it probably now stands where the lot is, which would make the other building the location where Sage Yoga now stands next door to me. So the Blue Heron Gallery and Caravan now are situated smack dab on the old horseshoe pit. Cool.
Here is another view from the photographic trove, a look through the horseshoe pit to the west down Alvarado towards the old post office.
Here is Jack's note to me:

Hi Robert,
Here are some images for you to ponder.  The two b/w photos are from a cache of images from 1918.  They are two different directional shots of horseshoe players in the vacant lot North of the Mercantile.  This is the lot where the Mercantile building was moved to and where your store is today.  The hand-drawn map is by Babes Reader from 1980.  These are her recollections of the buildings on Main.  The oldest are in red.  Next to “Nothing” it is written in pencil, “Horse Shoe Court”. 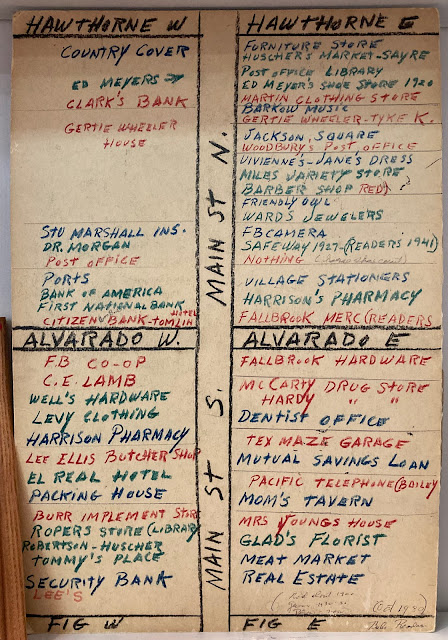 Here are the copies of Mrs. Reader's map, which I believe is on the wall at the historical society. The oldest notation is in red. My building says, nothing (horseshoe pit), then Safeway 1927, Reader's 1941 and then Fallbrook Camera, (which was owned by Bill Ahrend's dad.)
Now I have been in town for a relatively short forty two years and this is the first I have heard of a horse shoe court on my property. How cool is that? And look at the tall trees and stumps in the shots. Could the large living tree to the left be the same one that used to grow through Clementine's ceiling?
I have seen early pictures of the Safeway and if memory serves, it was pretty big, it not only was housed in my building but also in the building to the south, now owned by Ron Wylie.
I wish that some of the gray beards were still around, people like Clemmons and Port, who could make sense of this. Speaking of Port, Levy Clothing, so Mike was not the first landsman in town? Hmmm.
The person I know that has been here the longest is Mike Breining, I think he was born here around 1932, but he is practically if not totally blind these days and I haven't seen him out in a couple years. If any old Fallbrookians would like to offer comments and help and shed some light I would love to hear from you.
One thing to consider when looking at these pictures is how far off the ground the foundations stood. It is important to remember that the building of Vail Dam in 1930 radically restricted the water that flowed in the Santa Margarita, I have heard by as much as 30%.
There were at least three major floods on record that inundated much of the town. I can remember how much water flowed in the 1993 flood, the water going several feet up the side of the building that houses BP Battery and the heightened elevations make sense to me for 1918, a major flood occurring in the following year.
Please feel free to send this out. I hope that I have an opportunity to see the balance of Jack's fine collection. Jack graciously allowed me to post these. Please do not reprint them without his permission or use them commercially without his approval.
Posted by Blue Heron at 1:44 PM

Robert - Thanks for doing a bang-up job on the "horse shoe court" write up. Did you notice what looks like the old Fallbrook High School visible in the distance in the first photo? - Jack J.

No I did not, Jack. What defines it visually? It is the old Ivy School, right?

Russ and I arrived in 1971. The Hardware store was there with wooden floors. There was a step down when you went into the back area for paint. The current St Peter's thrift shop was the Post Office when we came, Bob Scofield who volunteered for Save Our Forrest when we first planted trees and hand watered 20+ trees on Main to get them going. He was raised here, and came back to retire. He had a great memory for locations of various buildings that have been moved to different locations, the Post Office being one.
Thanks for the memories.

ONCE AGAIN....delightful, and a good read....thank you Robert and Jack!! By the way, Bob and I have both lived here over 45 years, and love the history!