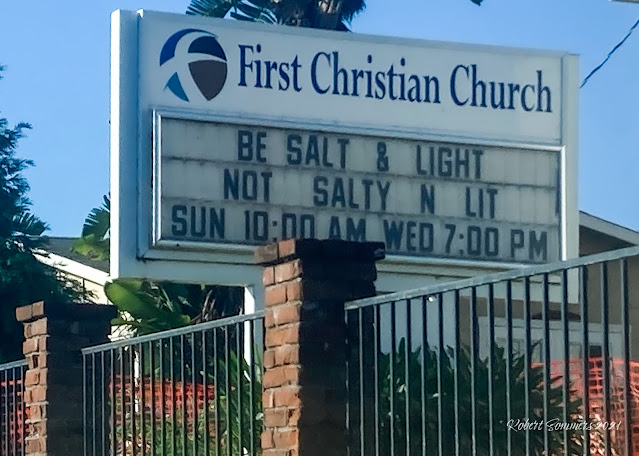 Trust no one unless you have eaten much salt with him. Marcus Cicero
I am not a religious man but I try to live a life based on moral and ethical principles. Like most of us, occasionally I fail.  I am a big believer in following the golden rule and treating others as you would wish to be treated.
I don't follow any particular religion, spiritual or dogmatic theory, preferring to utilize whatever feels right to me from various sources around our world. Sort of a Swiss army knife strategy. Works pretty well for me. I'm not a Christian but that doesn't mean that I don't believe Jesus didn't have some very important things to say.

The First Christian Church in Fallbrook, which is not located on church row, has what I think are the best signs in town, year in and year out. Sometimes funny, always worth considering. I snapped the picture above this morning, it sort of threw me. 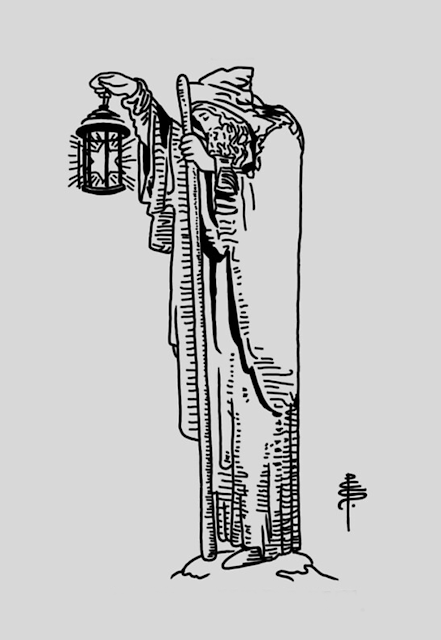 Be Salt and Light.

Now what did that mean? I had never heard of such a thing. Be a light yes, but salt?

Being a lover of language I decided to do some research. The Not Salty N Lit was easy, salty being a current word in vogue to denote crass and snarky demeanor and lit I guess means drunk or stoned.

Let me ask Merriam Websters. Yes, it does mean intoxicated but can also mean excellent in the new street vernacular.

Back to the Old Testament:

So salt has an early meaning of being a symbol of a covenant with G-D and was to be included in a grain offering. Ezekiel 16:4 alludes to the fact that newborn babies were rubbed with salt in a religious rite in biblical times.

I have read the bible umpteen times, the new testament at least seven and I don't recall the phrase or aphorism Be Salt and Light. So what does it really mean?

First we have to look to two verses from the book of Matthew NIV.

13 “You are the salt of the earth. But if the salt loses its saltiness, how can it be made salty again? It is no longer good for anything, except to be thrown out and trampled underfoot.

14 “You are the light of the world. A town built on a hill cannot be hidden. 15 Neither do people light a lamp and put it under a bowl. Instead they put it on its stand, and it gives light to everyone in the house. 16 In the same way, let your light shine before others, that they may see your good deeds and glorify your Father in heaven.

Okay, you're the salt of the earth. I get that. But it is not totally tangential to being salt. Could there be more? Here is an answer from a Christian website on the subject:

Jesus used the concepts of salt and light a number of different times to refer to the role of His followers in the world. One example is found in Matthew 5:13: “You are the salt of the earth. But if the salt loses its saltiness, how can it be made salty again? It is no longer good for anything, except to be thrown out and trampled by men.” Salt had two purposes in the Middle East of the first century. Because of the lack of refrigeration, salt was used to preserve food, especially meat, which would quickly spoil in the desert environment. Believers in Christ are preservatives to the world, preserving it from the evil inherent in the society of ungodly men whose unredeemed natures are corrupted by sin (Psalm 14:3; Romans 8:8).

Second, salt was used then, as now, as a flavor enhancer. In the same way that salt enhances the flavor of the food it seasons, the followers of Christ stand out as those who “enhance” the flavor of life in this world. Christians, living under the guidance of the Holy Spirit and in obedience to Christ, will inevitably influence the world for good, as salt has a positive influence on the flavor of the food it seasons. Where there is strife, we are to be peacemakers; where there is sorrow, we are to be the ministers of Christ, binding up wounds, and where there is hatred, we are to exemplify the love of God in Christ, returning good for evil (Luke 6:35).

Interesting. Christ as preservative and flavor enhancer. I think it is helpful to remember that two thousand years ago the value of salt was equal to gold and realize the immense value it had, both as a preservative and seasoning.
We see another mention of salt in Luke 14:34-35:

Salt Without Taste Is Worthless

34 “Salt is good, but if salt has lost its taste, how shall its saltiness be restored? 35 It is of no use either for the soil or for the manure pile. It is thrown away. He who has ears to hear, let him hear.”

I hope I am not making too much out of this and getting too religiously doctrinaire, I just found it intriguing in both a human, literary and spiritual sense. And it is good advice for a snarky and occasionally salty guy like me, preserve, don't attack. 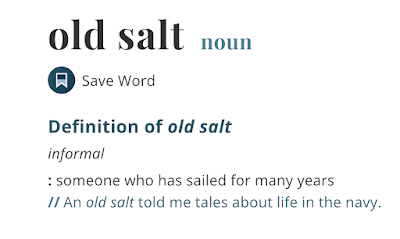 Let yourself be open and life will be easier. A spoon of salt in a glass of water makes the water undrinkable. A spoon of salt in a lake is almost unnoticed. Buddha
You shall find out how salt is the taste of another man's bread, and how hard is the way up and down another man's stairs.
Dante
"Do you know a cure for me?" Why yes," he said, "I know a cure for everything. Salt water." Salt water?" I asked him. Yes," he said, "in one way or the other. Sweat, or tears, or the salt sea".
Isak Dineson
Salt is born of the purest parents: the sun and the sea.
Pythagorus
To disbelieve in marriage is easy: to love a married woman is easy; but to betray a comrade, to be disloyal to a host, to break the covenant of bread and salt, is impossible.
George Bernard Shaw
Posted by Blue Heron at 2:29 PM

Salt...interesting ! You really delve. Me, i woulda gone into to the church and said "what the hell does THAT mean ?!". You know, cut to the chase. Ü

I think "lit" is a contemporary adjective ( or maybe a dipthong, for all I know), signifying "cool", but obviously does not apply to the sign.

I really like the time and thought on this, Rob. I’ve thought a lot about this “salt of the earth” topic since losing one of our cool VN photographers a few years ago - Fred Chase. I learned a lot about true Christianity from him. He was a really warm-hearted, spiritual person. At his (Catholic) funeral, much was said about the salt of the earth Bible passage. I miss that guy. He also taught me that it’s ok to boo at your home team 😂😂😂😂😂👍.

Thanks Debbie, I knew Fred pretty well but forgot that he worked for you. A very nice guy with a genuine laugh.