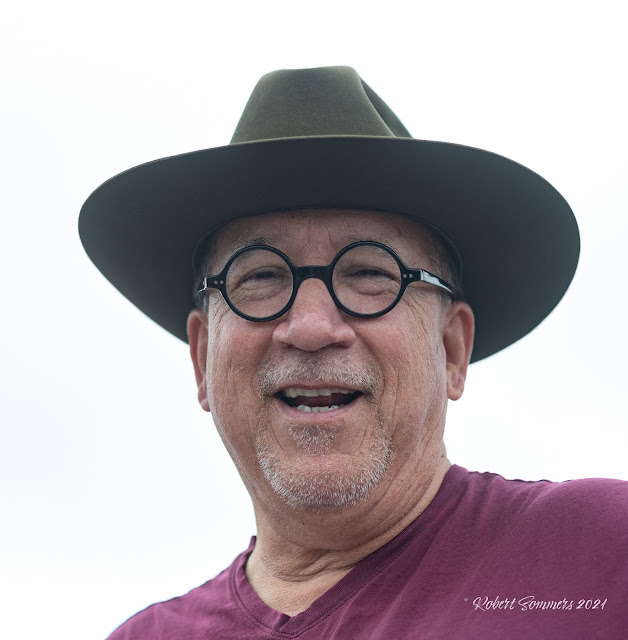 This is a picture I took of a friend of mine, educator and antique dealer Robert Galvez.

Robert is a great guy with a wonderful sense of humor.

This particular picture shows him in what I would call a neutral to happy emotional state.

Up but not giddy.

Perhaps a hint of suspicion, what the hell is this guy doing with a camera in my face at this hour of the morning?

I was poking around in Photoshop yesterday and I saw that there was a whole new rabbit hole to fall into called neural filtering.

Neural filters go into the cloud and assess your subject with a bazillion similar images in order to make suggested alterations with AI or artificial intelligence. 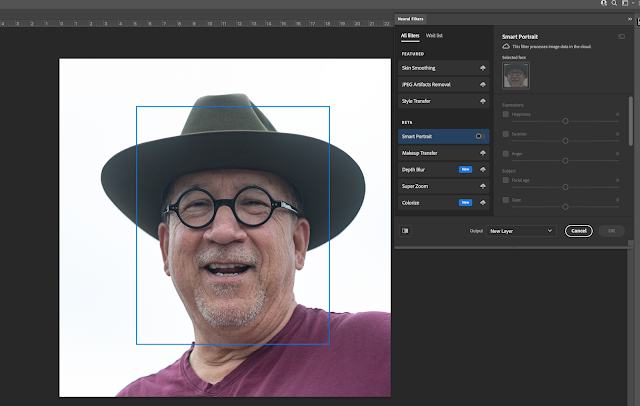 This really isn't my bag but I did write a course book on Photoshop that still sells very well and I like to keep up to date with what is going on with the Adobe product.
So I thought I would have a look. 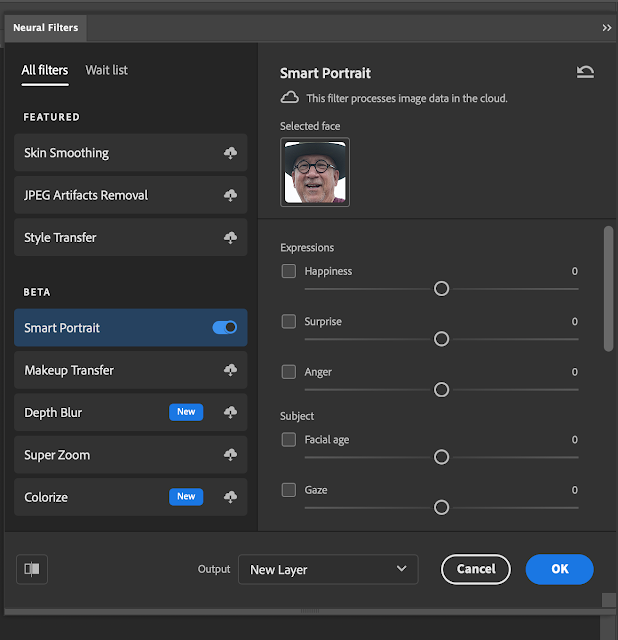 The smart portrait neural filter allowed me to adjust various (three) emotions in my subject that did not necessarily exist in my original capture (or that quaint and antiquated notion we call reality) as well as make a whole assortment of other modifications.
The first thing I did was dial Robert's happiness quotient up a whole mess, a whopping 45 points.
A naturally happy guy, his neural simulacra took to happy like a duck takes to water.
Anger was a whole 'nother story. Try as it might, the end product looked forced, unrealistic and not angry in the least. Somewhat pinched. Truth is, Robert is just a hard guy to get to look miserable and unhappy because that is not him. He's pretty up. Even his pissed off version looks a little joyful although mostly strained. More like happy after a root canal.

This is not going to be a tool I spend a lot, if any, more time with. I keep thinking of the movie Wag the dog. With manipulative tools like this, people can ultimately look and feel and emote any way you want them to and no one is the wiser. Or will be able to, when the technology matures anyway.

I am not sure that I am down with that, from an ethical standpoint. But it is interesting in an academic sense and it will be something to watch the technology evolve. Gracias, Roberto, for the shot.

These apps are used In today’s mainstream media more than we want to think. Ethics? What’s that?

I think these applications of artificial intelligence are a lot of fun in the "whiz bang" and "whistles and bells" sense. I think the portrait studio and advertising worlds will love them as well the world's selfie takers who will now all look dandy.

For creative work I think caution is in order. I read an interesting article that indicated that current artificial intelligence carries the bias of the writers foreword into the culture. For example, with the portrait you modified the program looks at a pile of images that themselves reflect the aesthetic preferences of their makers and then synthesizes a solution. AI is not going to help the work of true avant garde artists it it would tend to import image elements that are "popular".

So, if you are a pretentious twit like me you may want to leave the AI options turned off.