So what's been happening? 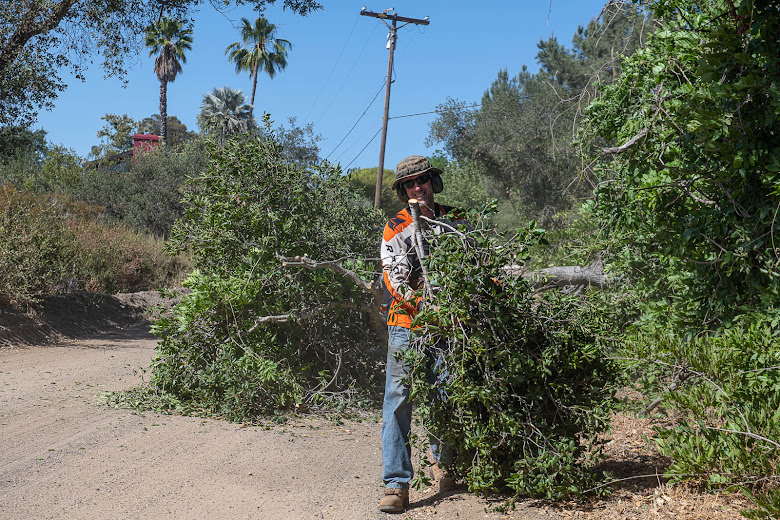 Leslie called Tuesday afternoon to tell me that we had a very large oak branch come down and that it was blocking the road. I called my buddy Todd, who is an arborist and paid him to remove the tree from the road.
Todd showed me the tire tracks that suddenly angled into the tree, the trash truck that had arrived that morning had hit it and the gouges in the wood up high bore that hypotheses out. I am not going to call the trash company because drivers tend to lose their jobs when stuff like this happens so I will eat this one.
Still having problems with new neighbors incessantly barking dogs but they are beautiful dogs and I hope they get comfortable enough to chill one day. Still have not met the neighbor and that is fine with me too.
The other neighbor that drives like a bat out of hell in his red truck and likes to dust the rest of us actually slowed down this morning. He almost hit another resident with his recklessness last week.
I don't really know where all the new people are coming from, Orange County or elsewhere, but when you live on a dangerous dirt rural road, you slow down for your neighbors, you don't speed up. There are blind curves and it might be your number that comes up one day, who knows?
Demographics of the place are definitely changing. I followed three white Lexus SUVs out to the turn on Mission this morning. With the price of real estate going up so high, people are cashing out and some of the new people have no clue about living in a rural setting. Or maybe don't care.
I was at the Firehouse Brew the other day and noticed lots of young people with Let's go Brandon t-shirts and red Maga hats on. Same thing with the stickers on the wall at the Red Eye Saloon. More young right wingers in town. I wondered if these were homegrown patriots or new entrants? Not sure...
Lots more American flags around and thin blue line flags. Great way to measure patriotism. Both are fine but I frankly lost my taste for the latter when I saw how many people beating cops over the heads with flagpoles January 6 were sporting them. Obviously a mere clueless fashion statement with no real underlying meaning. Or maybe those cops don't count? 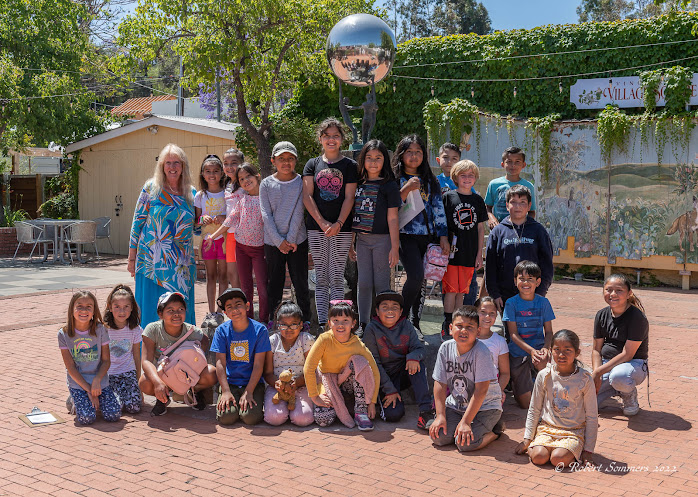 I had a mess of youngsters from Maie Ellis school walk by my shop the other day and took their picture down at the square. Nice kids. 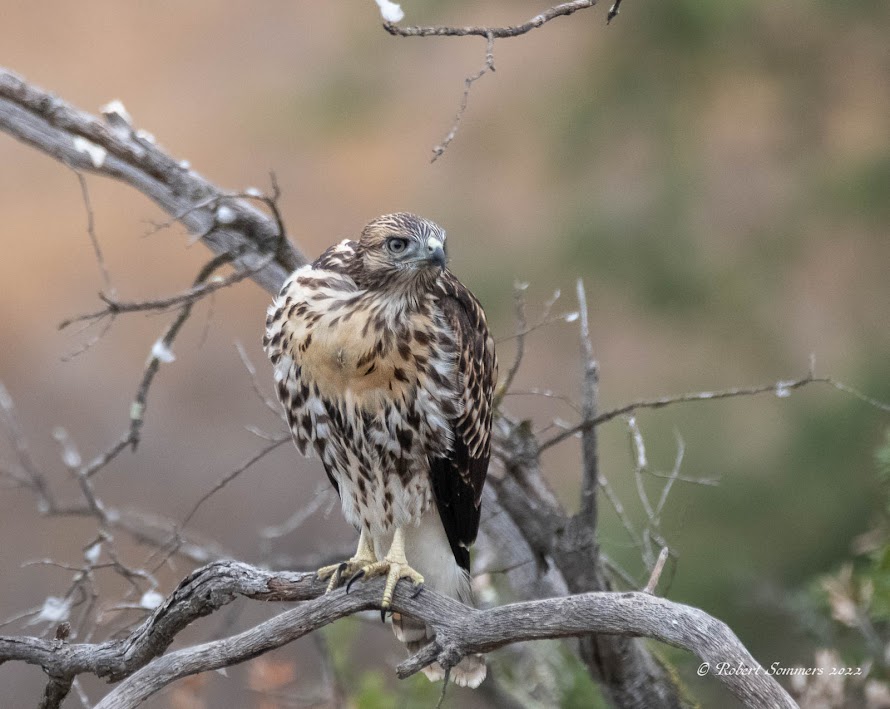 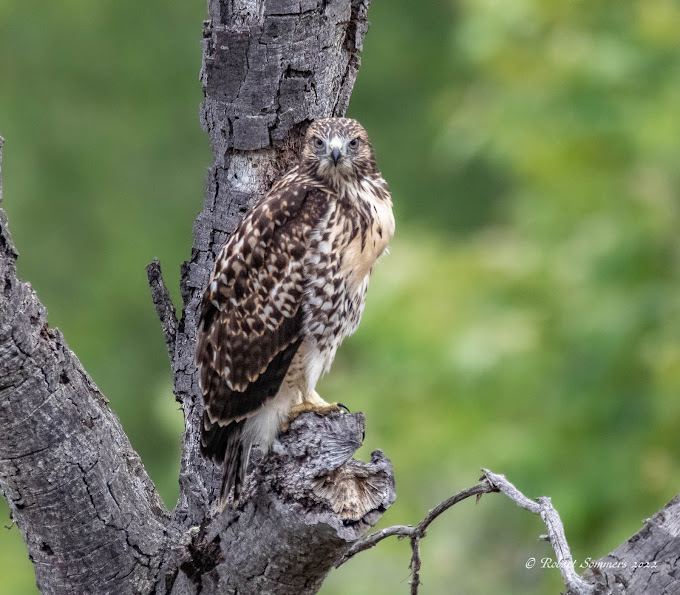 Red tailed hawks are continuing to get bigger every day and venture farther away from the nest. I never get tired of watching these guys. 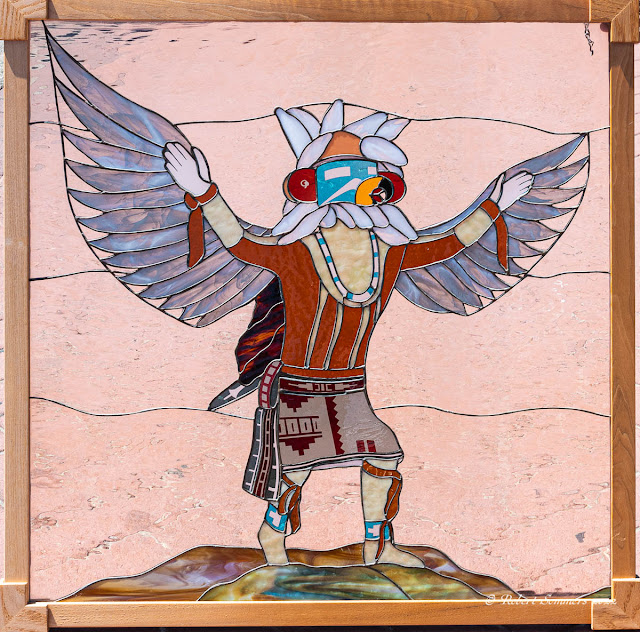 I bought a cool stained glass window from a Fallbrook resident who no longer had a use for it. 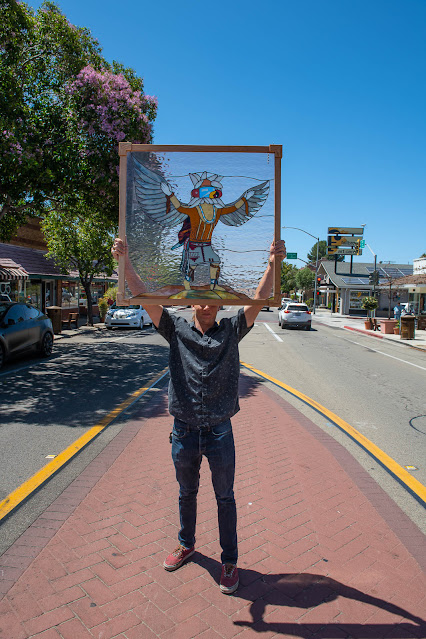 Her father was a dentist in town and Buck Gerlach made if for him way back when. Eagle dancer kachina.
It is not pink, that is the road behind it.
Here is a picture of Mason holding it up. It is for sale.
* 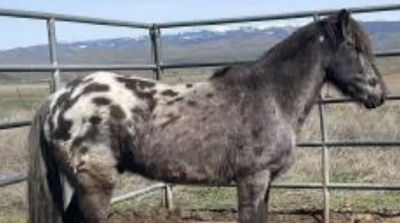 Do you want to help save a rare endangered stallion at a friend's ranch?
Here is the GoFundMe page.
* 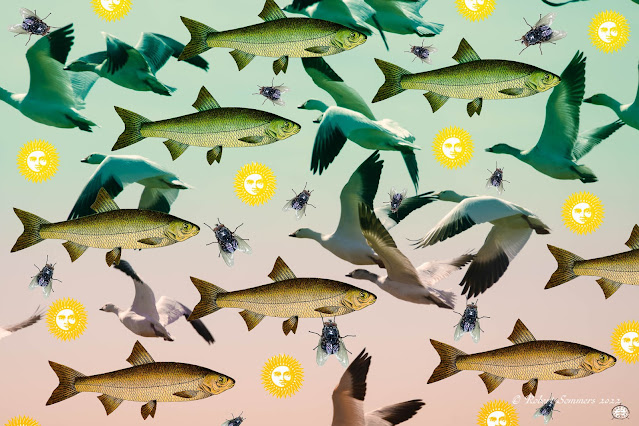 Bees and fish.
They are now legally the same thing, at least according to a California Appeals court.
My first response was, can we get any more stupid? But in reading the fine print, I understand the rationale a bit more clearly.

Bees are now legally considered fish in California under the state’s endangered species law, an appeals court in Sacramento ruled Tuesday. The 1970 act explicitly protected “fish,” which were initially defined as invertebrates. And because the act has protected snails and other invertebrates that live on land since, Tuesday’s ruling said it interpreted the legislation to also include bees. “Accordingly, a terrestrial invertebrate, like each of the four bumble bee species, may be listed as an endangered or threatened species under the Act,” the 3rd district California Court of Appeals Associate Justice Ronald Robie wrote.

So they are not calling them fish, they are merely grouping them with the other terrestrial invertebrate. As a terrestrial vertebrate who understands both the importance of preserving all species and the concept of "bellwether species" I applaud this move.
Anytime I drive up the 5 or 99 through the Central Valley and am assaulted with tons of right wing signs decrying the lack of dams and farm water I am tempted to stop with my spray can and write "yeah, fuck the fish" on them. So either or.  In any case, it is hard for me to drum up a lot of sympathy for corporate mega farmers, especially those that are continuously on the wrong side of the environmental debate and who have little or no concern for the rights and well being of farm labor, fishermen and indigenous people.
*
I am sort of astounded at the lack of ability to complete tasks this year, specifically my auction. Last year it seemed so easy, this year I am at about 30% of my normal ration. I am pushing but just can't get things done like I used to. Never got covid, must be the sudden onset of old age. Back to the grind tomorrow, have to get this finished.
I saw a statistic the other day that gave me pause to ponder;  That the space between the cessation of World War I in 1918 and 1970 is equal to the time period between 1970 and today, 52 years. Damn, it seems like war took lace so long ago and I still remember 1970 like it was yesterday.
*
I was never a huge Star Wars fan but understand that they were a part of popular culture. I thought the acting wooden and horrible, plot predictable, etc. Having said that the later iterations got worse and worse and it became completely unwatchable.
But then the Mandalorian came about and I was smitten! Wonderful stuff. Then Bobba Fett came out and it started to suck again. Now we have Obi wan Kenobi. Guess what, it is pretty good. Third episode was fantastic. All of the three offshoots are far better than the last franchise movies.
*
I have a lot of friends in San Francisco, many less (if any) in Boston. And I hate to incur the wrath but I consider the sports fans in these two cities the worst anywhere for gloating homerism. I never liked any of the teams from either city, in any sport.
But if I had to pick between Warriors and Celtics I would pick the Celtics to win this year. I like Horford and I dislike Draymond Green. I love Steve Kerr and I know Steph might be best ever shooter, at least since Maravich and the imposition of the three point line anyway, but it just ain't my team. I was a Laker fan until LeBron became the de facto general manager, now it is just a bunch of tired old guys like me. Honestly love Luka, was rooting for the Mavs. Oh well, next year.
Have a good week! 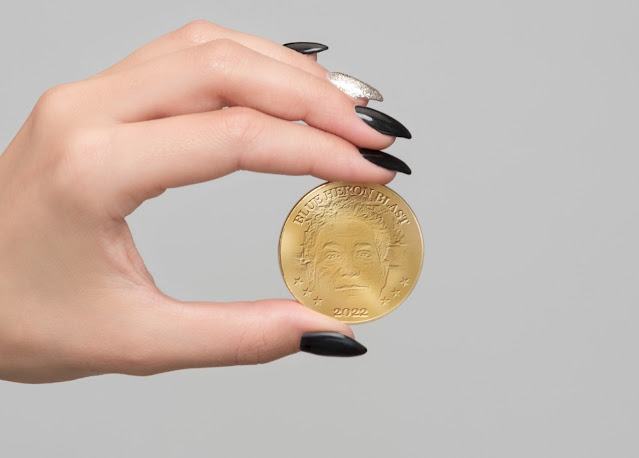 Yer gett’in mighty fancy with that there computing machine sonny.