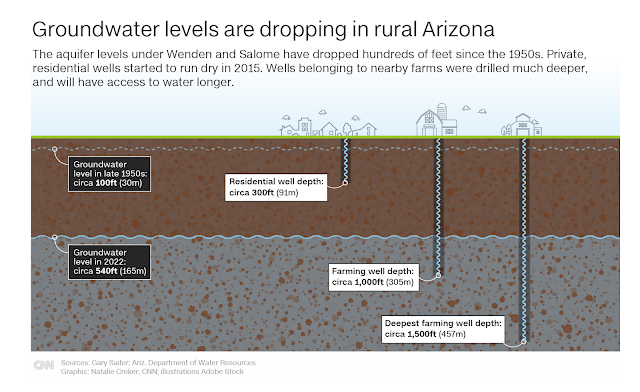 The idea that whole towns in Arizona are going dry while wealthy Saudi and Gulf Arabs drill deep wells and suck out all the available water in the table pisses me off to no end.

Twenty years ago Lee Merchen built his retirement home in The town of McNeal after serving 30 years in the Army. He says there wasn't much out here until about five years ago."There's a whole lot of people pumping water that weren't pumping water when we moved out here," he said. "Now there are pecan orchards everywhere. And crop circles all over."Many are using 1,000-foot-deep wells including one right next door to him. These well went dry a few weeks ago. So did Kyle Brazeal's.'Woke up one day, turn on the water, nothing happened," he said.
His family lives six miles away in Elfrida. They went without water for a month. "Filling up milk jugs, you know empty milk jugs at our neighbor's house and stuff and hauling them back and forth every day just so we can flush the toilets or wash our hands."

The wealthy foreign companies grow alfalfa and then send it across the water to feed their cows and camels overseas. This makes my blood boil. See Wells are running dry in drought weary southwest as foreign owned farms guzzle water.

Workers with the water district in Wenden, Arizona, saw something remarkable last year as they slowly lowered a camera into the drought-stricken town’s well: The water was moving.

But the aquifer which sits below the small desert town in the southwestern part of the state is not a river; it’s a massive, underground reservoir which stores water built up over thousands of years. And that water is almost always still.

Gary Saiter, a longtime resident and head of the Wenden Water Improvement District, said the water was moving because it was being pumped rapidly out of the ground by a neighboring well belonging to Al Dahra, a United Arab Emirates-based company farming alfalfa in the Southwest.Residents and local officials say lax groundwater laws give agriculture the upper hand, allowing farms to pump unlimited water as long as they own or lease the property to drill wells into. In around 80% of the state, Arizona has no laws overseeing how much water corporate megafarms are using, nor is there any way for the state to track it.

And the worst thing, these poachers get the water for free.

As first disclosed in The Arizona Republic last June, the State Land Department has leased state trust land to the Saudi-owned Fondomonte corporation for $25 per acre, so that the Saudi company could grow alfalfa and send it back to Saudi Arabia to feed that country’s cows.

More unbelievably, the state is allowing this company to pump groundwater for free. The $25/acre land lease is well below market rates, and the water being given away comes from the Butler Valley Basin and Vicksburg – areas that Arizona cities may very well need to rely on for their water needs in the near future.

The people of Arizona deserve better. Their leadership has obviously sold them out. Of course, it is not only rich Arabs sucking up the water, American megafarmers are doing their share of damage too.

Coronado Farms and Turkey Creek Dairy are huge cattle operations that also share the Willcox Basin.  They are owned by Minnesota-based Riverview LLP and first arrived in the Willcox area in 2014.

Though not the only large water user in the area, they certainly are the most visible. They don't just raise cattle, they grow the food to feed them, and that takes a lot of water. State records show the company owns more than 100 wells across the Sulphur Springs Valley — some as deep as 1,200 feet into the ground and can pump up to 2,000 gallons of water a minute.

This needs to stop.

The town of Corcoran in the San Joaquin Valley of Ca has subsided 11.5 feet over the past decade….. it is a result of having the ground water depleted by agriculture.