I saw that somebody named Tory Lanez was convicted recently for shooting Megan thee Stallion, whoever the hell that is? And I had the thought, man, there is a lot of that stuff going on in Rap and Hip Hop, people shooting each other. Like, what is up with that?

Biggie, Tupac, Nipsey Hussle. Pop Smoke. King Von. PnB Rock. Young Dolph. Takeoff. And the list is a hell of a lot longer than that, I had to shrink the attached page just to get a screenshot. Rap is obviously some dangerous shit. They can't quit poppin' caps into each other. What's with all the excess testosterone? 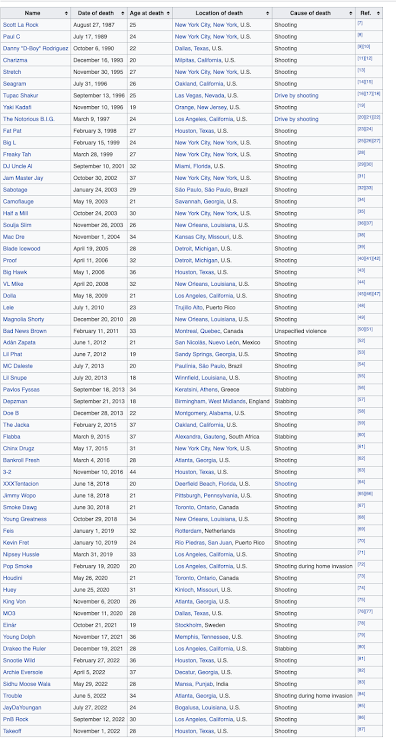 This list is of course just the dead ones, not the wounded, the poor Stallion won't even crack these charts.
But it got me to thinking. When I was a kid there was a healthy competition among bands but they didn't ever get strapped and shoot each other. Rivalries were healthier. I guess we were quaint back then. More provincial.
Quicksilver may not have liked the Frumious Bandersnatch much but they never resorted to raw gunplay.
Daltrey never threw down with Long John Baldry. I do think he once socked Jerry Rubin but I don't believe weapons were involved.
As far as I know, Duane Allman never tried to put out a hit on Ronnie James Dio. Janice Joplin was never in a wicked catfight with Tracy Nelson. Or Genya Ravan.
Of course I am from the Love Generation. Things definitely got weirder later on.
Maybe I am overly sentimental but things seemed so much nicer when I was a kid.
Don't shoot anybody.  It's just music.
On a completely other note, I thought that Tupac really missed a bet not ever forming a band with the late King Sunny Ade.
Can you imagine? Tupac a day?
Posted by Blue Heron at 12:35 PM

Well, Bobby Fuller ( I Fought The Law) was killed by Mafia. A lot of those '60 s guys wanted to kill each other at times...Stills/Young, McGuinn/Crosby and others i can't think of at the moment