The Republican Jewish Coalition on Tuesday said Rep.-elect George Santos (R-N.Y.) “deceived” the organization and “misrepresented” his Jewish heritage, adding the incoming lawmaker is no longer welcome at its events.
“He deceived us and misrepresented his heritage. In public comments and to us personally he previously claimed to be Jewish,” Brooks said in a statement. “He has begun his tenure in Congress on a very wrong note. He will not be welcome at any future RJC event.”

Santos came back at them.

“I never claimed to be Jewish, I am Catholic. Because I learned my maternal family had a Jewish background I said I was ‘Jew-ish.’”

Frankly I find this whole thing incredibly funny. That was a great line and I have used it myself in the past. So he can't go to RJC events? Big deal. 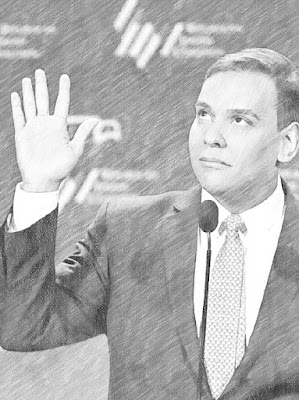 But what I find really funny is that this guy could hang out at a recent New York Young Republicans dinner with noted nazis, racists and anti semites like Peter Brimelow, Marjorie Taylor Greene, Pizza Gater Jack Posobiec, Lucian Wintrich, Maximillian Krah and the Republican Jewish Coalition didn't bat an eye.

Why waste your time vetting him, he's a rich lansman for Pete's sake!

Of course, Jewish Republicans carried water for Trump during Charlottesville (Jews will not replace us,) Kanye, Nick Fuentes, Bannon, and when the orange one went after all the rest of us ungrateful jews.

Frankly, most Jewish Republicans scare me, we see the world quite differently and this particular incident with Santos illustrates the difference in spades. They have lost their jewish heart along the way, a most essential element to being a human being. Real jews don't make nice and break bread with nazis. For some people, ideology never reaches beyond their own wallet, bank account or self interest. And the GOP leadership knew he was a scam the whole time but thought it didn't matter if people were stupid enough to elect him.

Will love to watch their gyrations when this Santos nebbish takes office. Should be fun. By the way, my finely tuned jewdar spider sense called this guy for what he was from day one. But his supposedly being jewish was good enough for these people, all it took.