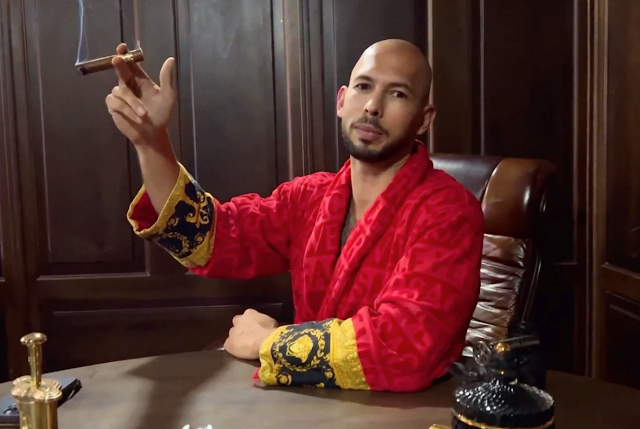 I have to confess, I didn't even know who Andrew Tate was before the Thunberg tweet I wrote about the other day. I guess the self professed "alpha male" is a former kickboxer and practicing misogynist who has quite a following amongst the right wing incels. Thankfully, he has escaped my radar. 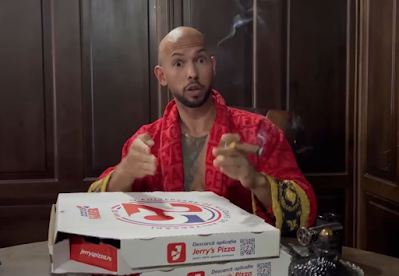 He engaged in a twitter tete a tete with the young climate activist Greta and apparently gave away his location data due to his choice of pizza, Romanian authorities wanted to detain he and his brother for questioning in a rape and human trafficking organized crime case and they apprehended him, supposedly after tracking down the pizza box.

Romanian prosecutors said in a statement Thursday that they identified six people whom they allege were recruited and then sexually abused in Ilfov county, which includes the capital, Bucharest.

Authorities allege that the victims were coerced into participating in pornography for distribution on social media and that one of the suspects twice raped a victim in March. The statement, which did not name the Tate brothers or specify which suspect was accused of rape, alleges that the victims faced “acts of physical violence and mental coercion.” 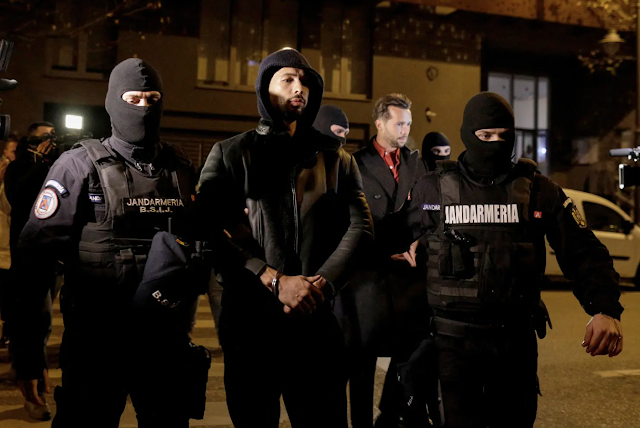 Just the weirdest story. The guy looks like he crafted his narrative from a Bond villain. But the ecologically minded climate activist had the best reply, "This is what happens when you don't recycle your pizza boxes."

But the best was the woman hating alpha male lecturing the woman cop who brought him in, never once breaking his dickish form:

The video of Andrew Tate’s arrest has been revealed and in the now-viral clip, the former kickboxing champion was seen repeatedly interrupting the female cop reading him his rights.

“I’m gonna have to stop you right there, babe,” interjected Andrew Tate while being handcuffed.

“You’re running your mouth right now about how ‘I have the right to an attorney’ or whatever, but you’re just proving my point about modern women,” he was heard saying to the female police officer.

“As an alpha male, you should be submitting to me, but society has warped your genetic mindset and made you a callous [expletive] who wants to lecture me about things like what shoes I should buy you or what human rights I’ve violated. Look, after this whole ‘human trafficking’ thing is over, you want to grab a drink sometime?” Andrew Tate said while threatening the female cop.

“It took me almost four hours to get through the full list of rights in one go,” Officer Fischer said. “Mr. Tate would hold a finger to my lips and start aggressively bench-pressing or monologuing about the secret to being wealthy while backup officers searched his home for two missing girls,” she said.

“I eventually was only able to get him to listen by insisting that cutting me off was ‘a total cuck move,’ upon which he sat down and diligently listened,” she added.

Babe? I predict that this guy is going to have a total reeducation in jail. Or I hope so anyway.

His peeps on the right are, of course, engaging in puerile whataboutism and bringing up Epstein, whose client list actually had no particular political ideology.

The new cause celebre. Now sex trafficking is political.

Toxic masculinity might not win this round. They'll love the smoking jacket in jail.
Posted by Blue Heron at 9:44 AM

Yes, I too had no idea who this dickhead (his pic is a fair representation of this epithet!) is until I read my journalist news feed this morning!

Jail in Romania is probably nothing to laugh about.

He has a point about the mindset thing. Submit babe!!

Robert,thankyou for the blog, I have to agree with Kevin S. seems we were all silent about the Jeff dude, I think he still needs to be dealt with and his wickedness also, happy new year to all!!