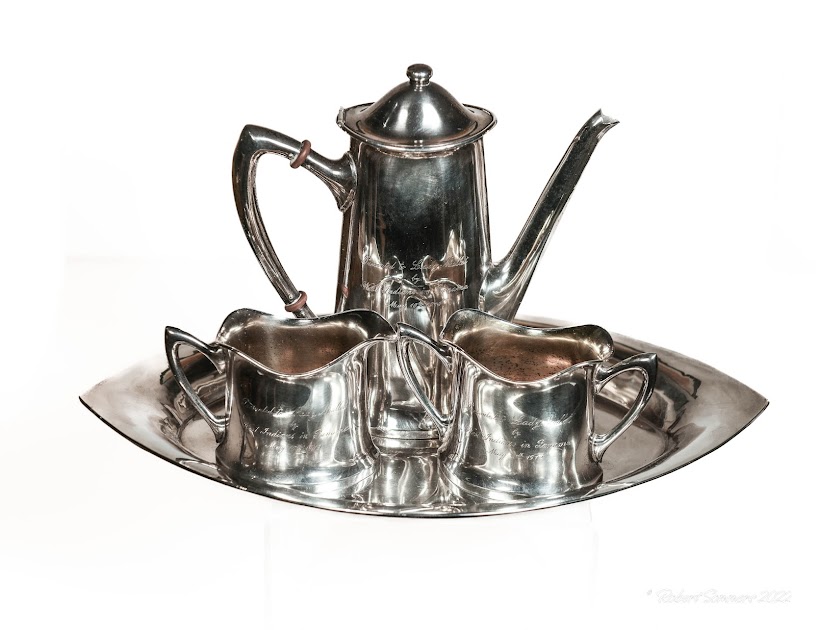 Most of us that purvey antiques and fine art have a deep love of history. Every acquisition is a small window that hopefully provides some insight and knowledge of our past. Occasionally a piece will grant a dealer the opportunity to learn about something which he knows next to nothing. This is such a find.

I bought this four piece sterling silver tea set from a dealer and dear friend in the Monterey area about a week ago. Although it is lovely enough in a decorative sense, and in perfect condition, the inscription was intriguing and is what unleashed the whole new field of inquiry for me. 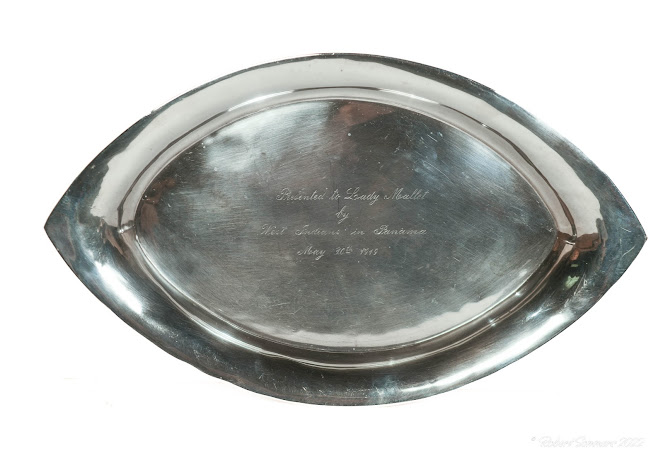 Each of the four pieces bears the identical hand engraved inscription -

by West Indians in Panama

I must confess to knowing nothing about the English lady but after a little research was amazed by both her enormous legacy and the initial torrent of information that I had uncovered. Lady Mallet was an important figure in both British and Panamanian history. My information is still very sketchy so please pardon me, I am still filling in the blanks. But the more I find, the more I want to learn about this remarkable woman.

Lady Matilda Obarrio Mallet (1872-1964) was wife of the British envoy to Panama, Sir Claude Coventry Mallet (1860-1941), British envoy Extraordinary and Minister Plenipotentiary to Panama, Uruguay and Costa Rica. I saw a citation that stated that he was Lord Balfour's Secretary but have not corroborated or verified that fact as yet.
Lady Mallet was expressly forbidden to keep a journal but being a copious chronicler, wrote many very important books anyway including Sketches of Spanish Colonial life in Panama, 1915. I believe that she wrote over 47 books in her lifetime but it is possible that I am conflating her biography with another Lady Mallet so you will have to excuse me until I can nail this down.
The breadth of her contributions far exceeded the literary. She founded the Panamanian Red Cross and worked tirelessly championing the rights of the oppressed in her native land. Much of the following information was gleaned (and somewhat clumsily translated) from Wikipedia:
Of Ecuadorian and Panamanian descent, she was born in Guayaquil in 1872. Her maternal grandfather Ramon was a hero in the independence movement from Spain and signed the Independence Act in 1821. Her paternal Grandfather, Pedro de Obarrio y Guerrero, was Governor of the Province of Panama from 1836 to 1840 when it, with Columbia made up the Republic of New Granada.
Her siblings were Fania de Obarrio Vallarino, María de Obarrio Vallarino, Alberto Belisario de Obarrio Vallarino, Nicanor Arturo de Obarrio Vallarino (general and hero of the Separation of Panama from Colombia in 1903) and Dr. Pedro de Obarrio Vallarino, superintendent of the Hospital Santo Tomás from 1905 to 1911. Life in Panama was tough after freedom from Spain was won. Land was confiscated, the people were poor.
In 1900, after the Battle of the Calidonia Bridge broke out, in the so-called War of the Thousand Days, on July 25, the liberal commander Emiliano J. Herrera, wrote to her husband Claude Coventry Mallet, consul of the United Kingdom, to request the ambulance of HMS Leander, which was anchored on the Isla de Taboga, to pick up the hundreds of dead and wounded, 5 together with Doña Matilde. The use of English ambulances and a Chilean ambulance are considered the first humanitarian activity carried out in Panama, 6 under the emblem of the Red Cross.
The war spread poverty and disease throughout the area. Large numbers of itinerant West Indian workers were unemployed due to the completion of the construction works of the Panama Canal . Many did not want to, or could not return to their countries of origin, which caused them to crowd into the old wooden houses built when construction began for an interoceanic canal. This resulted in many gastrointestinal diseases, tuberculosis and pneumonia due to a high level of unsanitary conditions, in addition to several victims due to the recurring spread of fires.
Aware of the great health limitations that plagued the first years of the country's independence, Lady Mallet began a series of negotiations with the Panamanian Government, private entities and generous people in order to establish an institution in the new Republic that would be in charge of care for families affected by the aforementioned situations.
Doña Matilde, covered a whole range of works in favor of the most humble and needy classes of her country. She was a promoter of the fight against tuberculosis, infant mortality, the treatment of prisoners and a host of humanitarian activities that included fire prevention and sanitation of the unhealthy popular sectors of the marginal neighborhoods.
Lady Mallet established with her husband subsequently in England, the buildings at Sydney Place, Bath 207 in Somerset and during the First World War she worked with the British Red Cross.
At the Star and Garter hospital in Richmond, she paid for a room that was named “Lady Mallet Panama Room” and made the “Costa Rica Reading Room” a reality in the same hospital.
Doña Matilde also cooperated with works in Panama City, such as the restoration of the Santa Ana Church, the Metropolitan Cathedral in which she ordered mother-of-pearl shells to be found from the island of Taboga to cover the domes of its towers (which are still preserved), as well as the arrangement of the altar in the churches of San Francisco and Santo Domingo. She also participated in the conservation of the "Altar de Oro" in the Church of San José , together with William C. Gorgas and prevented the termite from damaging it, placing on it, with the help of the community, sheets of 20-carat gold leaf. In that Church is the image of Our Lady of Grace, patron saint of his ancestors and property of the Obarrio family. Lady Mallet, she never limited her activity to what she called her homeland.
I am not going to belabor this brief biography but I found newspaper articles from the day where she stepped in to save these black workers from being oppressed and killed by whites in her country. She definitely went to bat for these people. It was a time of great social upheaval. From the Hispanic American Historical Review:

Power—social and political—had long been in the hands of a few wealthy families. This small elite segregated itself in an area of the colonial Panama City surrounded by walls that symbolized in subtle but real ways its power and social position. In 1915, Matilde María de Obarrio de Mallet, granddaughter of one of Panama’s most prominent merchants, Pedro de Obarrio, commented on the enduring image and meaning of the walled sector: “Inside lived the nobility with their slaves, outside lived the people, and even at the present time when the barrier of the fortifications no longer exists, the idea remains and the best families prefer to crowd inside in discomfort.”34 She referred to the barrio of San Felipe, which politically, economically, and socially was “The City.” Beyond the walls, in Santa Ana and La Ciénega, lived a growing number of “outsiders” who had begun to challenge the elite’s monopoly of power. 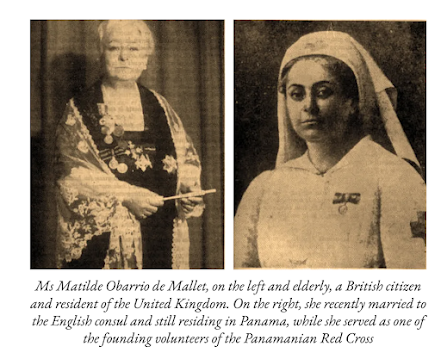 I found another book in my research, Letters from the trenches during the Great War, written correspondence between Lady Mallet and what I assume are these very same men, from the British West Indies Regiment.
The notation is written - "LeHers ... addressed to [M. Mallet], principally, by the coloured West Indians who volunteered in Panama." Obviously the love and comity that she shared with these people never waned.
This silver tea set is a gift to her from them and a beautiful show of gratitude. World War I ended in November of 1918, this is a token of appreciation presented some six months later. 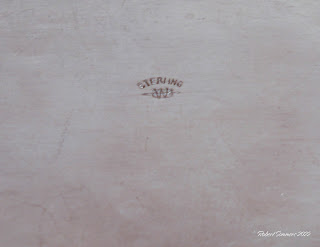 The set itself is sterling silver, the tray 11 & 1/2" wide x 6 & 3/4" deep. It is hallmarked and was made by the Webster Company in North Attleboro, Massachusetts.
I hope to find a history museum or ngo in London or Panama that is interested in purchasing it.
*
I found out a bit more about her.

She studied at the Academy of the Sacred Heart, now Manhattanville College, in New York, between 1884 and 1888. Later she moved to the Convent of the Sacred Heart in Paris. In the course of her studies, once she had mastered the Spanish language, she studied English and French. After completing an educational tour of Italy, she returned to Panama in 1890 and her maternal brother Rodolfo Halsted Vallarino took the opportunity to introduce her to the British consul in Panama, Claude Coventry Mallet.

I have to wonder how this incredible silver set ever found its way to California? That is the part of the story we will probably never know.

Yep! The research is always a big part of the fun and satisfaction of being a dealer in 'old stuff'.

I liked the shorthand of, "the Separation of Panama from Colombia in 1903" in one of the texts you found. I seem to remember in history class that the United States backed a Panamanian insurgency when the region was part of the country of Colombia - in exchange for rights to build the canal through the isthmus when the Colombians would not approve the project.

Still, my favorite palindrome: A man, a plan, a canal, Panama!

What a wonderful find, wonderful story, amazing woman. I hope the beautiful set finds a suitable home in her honor. Thanks for the history lesson, much appreciated. ~ Diane O

This tea set and its inscription is mentioned in my book, Panama Fever (Hell’s Gorge in UK paperback)!

I have received your very interesting e mail which has attracted a lot of attention
My wife Mrs. Primrose Mallet-Harris is a grand daughter of Lady Mallet
You have carried out some detailed research. Some of this needs correcting. After Christmas I will write in more detail
In the mean time I have forwarded your e mail to Dr. Carlos Guevera Mann. His mother was a niece of Lady Mallet and he lives in Panama
He may know about the tea set which should most certainly return to a Museum in Panama and Dr Carlos will know the best one
Kind regards
James Harris

They are from my family direct by my grandfather Julian Mallet.

How did they end up in California?