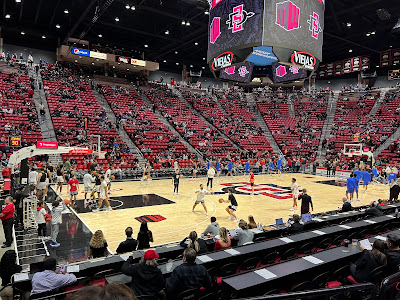 I went to the Aztec basketball game last night with my friend Mick, a fellow alum. (My association with the school was actually quite brief, took enough night classes to get my Construction Project Management credential, way back when.)
S.D.S.U. was playing Air Force and it was a late game down at Viejas, started at 8:30.
If you are interested, we won, first conference game. Ten and three. Bradley finally got his mojo back, 27 points. 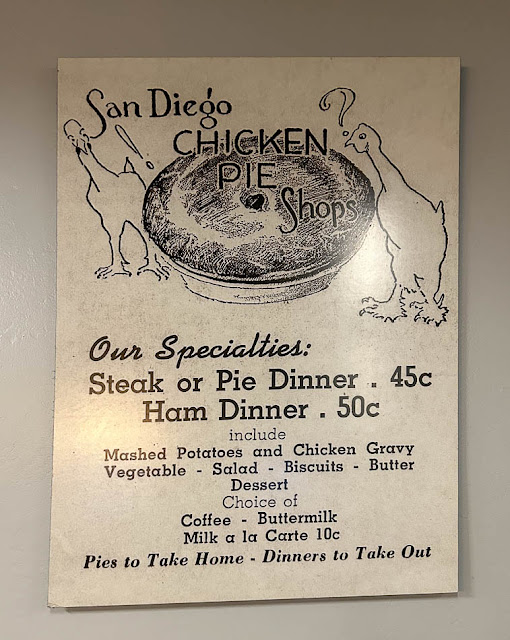 We were trying to decide where to have dinner and I suggested a restaurant out of my youth, the Chicken Pie Shop.

We went to the only surviving location, on El Cajon Blvd.

I don't think I have actually ever gone to this location before, always going to one of the two on Fifth when I was a kid. 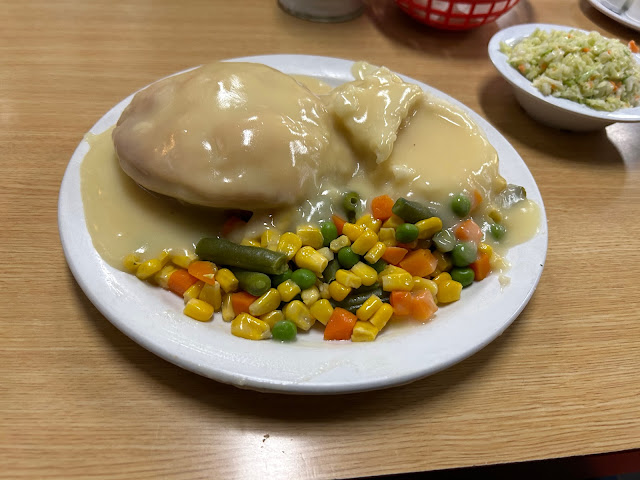 The Chicken Pie Shops were started when we were coming out of the depression, in 1938 and have a great honest, retro feel. 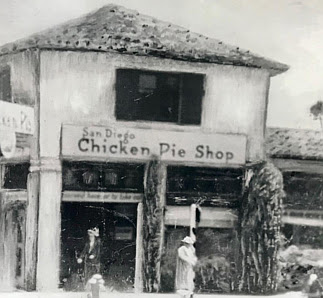 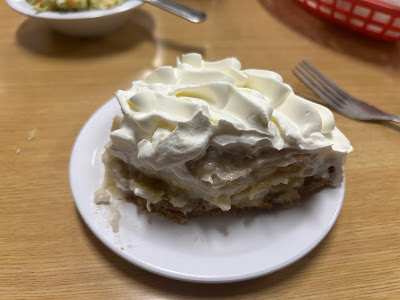 I had the pot pie and a slice of banana cream last night, Mick ordered a very generous platter of fried chicken, expertly cooked, looked fabulous. (he never offered me a bite 😄)

They should be able to cook it right, they have been practicing for 85 years!

Nothing fancy here but definitely comfort food for a kid like me who was born just down the block. 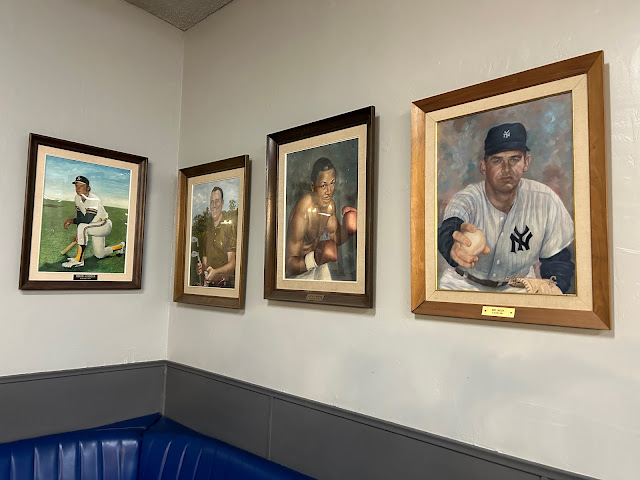 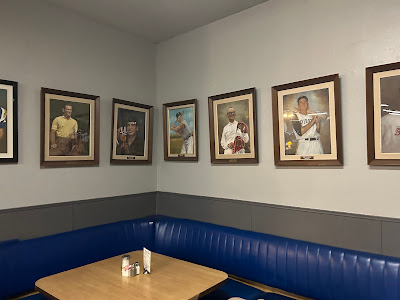 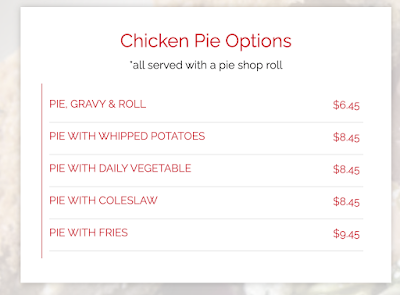 The Chicken Pot Pie shop is not fancy, but it is a place where you can still get a wonderful pot pie, in a variety of ways, and it won't break the bank.

Will probably survive through the next depression, too.

Buy the complete dinner and you get slaw, a roll and a piece of pie to boot, for around twelve bucks.

With the exception of the modest increase in prices, not a hell of a lot has changed there.

The woman we talked to behind the counter, Shalia, had been there since 1975. The clientele were normal, common folk, like you and me. Having an honest meal.

It got me to thinking that it had to be one of the oldest surviving restaurants in the county? Actually, according to this list, it is the fourth or fifth, depending if you call the Tivoli a restaurant or not. 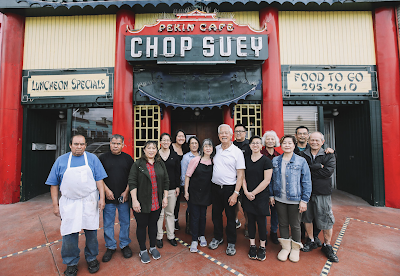 The oldest was the nearby Pekin Cafe Chop Suey, over on University in North Park, but it closed three years ago. That one opened in 1931.
Now the oldest is said to be Las Cuatro Milpas in Barrio Logan, owned by the founding Estudillo family since 1933.

Not sure how old Jimmy Wong's Golden Dragon was but it has also now closed.

People who never lived here before the freeways don't know, but when I was a kid San Diego revolved around two streets, El Cajon Blvd. and University.

The landmarks were places like Carnation and Blumers, Pernicano's, Nicolosis, the Red Fox room and Don Joses. So many of the great places of my youth are now gone, Lubachs, Islandia, Casa de Baffi, Tarantinos, Kona Kai, Top Shelf, Manny's, Old Trieste, time marches on.

All have sailed into the San Diego sunset. The Chicken Pie Shop continues.

Robert,
Liked the Chicken Pie story. When I was growing up in Allied Gardens, my parents would take us to Hillcrest and eat at the Chicken Pie or at Pernicanos for Italian and Pizza.
And when we were really celebrating a birthday or something festive, we'd go to Anthony's for sea food at the harbor. My father retired from the Navy when I was about eight,
and a bit later, he went to San Diego State. He took me to various events - Joan Baez singing, and Martin Luther King speaking one afternoon at the outdoor theatre.
I was about 11 and reading Dr. King's book "Stride toward Freedom". After his speech I met him. We had a chat (I was the only kid there) and he signed the book for me.
Makes me feel good, when you write anecdotal pieces about San Diego.
Gracias y Saludos para el ano nuevo!
Robert B.