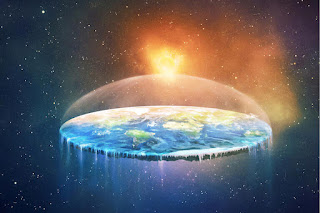 I saw a statistic the other day that roughly 21% of adults believe that there is an actual Santa Claus.

This is a bit sobering, most people figure the whole thing out by the time they are six or seven. Do these adults feverishly wait with their kids for Kringle to come down the chimney on Christmas Eve? Awesome.

But it got me thinking about just how stupid we humans are, one of my favorite topics of conversation and led me back to my favorite quote from Ken Kesey.

This is a quote I was lucky enough to hear first hand; never forget that in any given situation there will be more stupid people around then smart ones. Helps to repeat that often when you are driving.

And it also led me down the "just how stupid are we?" rabbit hole.

And I came up with this:

Over one in four Americans (26%) thinks the sun orbits the Earth, according to a National Science Foundation study.

In the same survey, just 39 percent answered correctly (true) that "The universe began with a huge explosion" and only 48 percent said "Human beings, as we know them today, developed from earlier species of animals."

Just over half understood that antibiotics are not effective against viruses.

Forget the flat earthers for a moment. 34 percent of Americans reject evolution entirely and believe humans have existed in their present form for thousands or tens of thousands of years, according to a Pew Research Center Religious Landscape Study. Pew said 62 percent of U.S. adults believe humans evolved over time.

Furthermore, you would be astounded how many people think that humans and dinosaurs lived at the same time.

YouGov’s latest research shows that 41% of Americans think that dinosaurs and humans either ‘definitely’ (14%) or ‘probably’ (27%) once lived on the planet at the same time. 43% think that this is either ‘definitely’ (25%) or ‘probably’ (18%) not true while 16% aren’t sure. In reality the earliest ancestors of humans have only been on the planet for 6 million years, while the last dinosaurs died out 65 million years ago.

20% do not believe that climate change is occurring.

Some people apparently still believe that sex positions can determine a baby's gender. Or that condoms can be washed and re-used.

And then there's geography.

In the midst of the Iraq war in 2006, six in 10 young adults couldn’t find Iraq on a map of a Middle East. The Roper survey also found that 75 percent of those surveyed could not identify Iran or Israel.They’re not much better at U.S. geography. Only about half could find New York State on a map.

From the National Geographic:

About 11 percent of young citizens of the U.S. couldn't even locate the U.S. on a map. The Pacific Ocean's location was a mystery to 29 percent; Japan, to 58 percent; France, to 65 percent; and the United Kingdom, to 69 percent. ...Particularly humiliating was that all countries were better able to identify the U.S. population than many young U.S. citizens. Within the U.S., almost one-third said that population was between one billion and two billion; the answer is 289 million.

Let that sink in. Over one in ten young Americans could not find the U.S. on a map. You are sharing the road with these people, breathing the same oxygen and interacting with them every day. Be careful.

Over at Psychology Today, they tell us that we should not equate stupidity with anti intellectualism. I still think there is a surfeit of stupid. Plenty to go around.

Yeah, I'm letting it sink in...with a martini. Monkeys. We are monkeys with a thin, thin layer of ability to reason, if we try hard. ~ Diane O

What happened BEFORE the 'huge explosion'? It's turtles all the way down.

Some humans developed...some are still Democrats.

We have climate change everyday...it's called sunrise and sunset (apologies to Chava)

Difference in mean temperature between cities and rural, about 3-5 degrees on average...resulting in no climate change.

Obama's aunt stated she was present at Barry's birth...in Kenya.

When you use a sock...it's washable.

With all this said, never ever underestimate to power of large groups of stupid people to do great harm. By the way we're not monkeys, we're just apes with shoes on our feet.

34 percent of Americans reject evolution entirely and believe humans have existed in their present form for thousands or tens of thousands of years,

Technically correct...Homo sapiens sapiens (modern humans) arose between 160,000 to 90,000 years ago. according to current estimates. Fossils of Homo Sapiens (of which we are a sub-species) date back around 315,000 yearsso the species is older than that

You are hairsplitting, Desertrat. If you want to believe that tens of thousands encompasses 169kya, I suppose it is technically correct but a bit of a reach if you ask me. And understand that the question from Pew also said that the 34% rejected evolution entirely, it is not either/or.