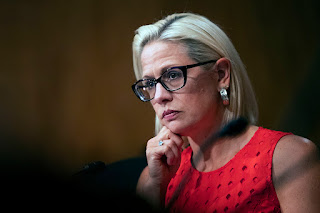 In 2018 Kyrsten Sinema became the first Democrat in three decades to win a Senate race in Arizona, defeating former Sen. Martha McSally (R-Ariz.). She did this with a lot of money and support from the Democrat party. Schumer cleared the way for her win.

This morning she announced that she is changing her political affiliation to Independent. This is the absolute worst time, at least from my political perspective, for her to make the move, just as the Dems get a true majority in the Senate.

But it is par for the course for a woman who only took and gave nothing back to the party, failing to support other Arizona Democrats and was always only thinking about herself and her pharma and equity capital buddies.

How would you like to be in a foxhole with a narcissist like this, who only thinks about her own narrow agenda and so casually thwarts the people who got her elected in the first place, Arizona Dems? Remember, she started out as the whacky Green Party bisexual with the fluorescent outfits, now she has no seeming ideology whatsoever except for personal self aggrandizement. One of my heroes was Abbie Hoffman. Hoffman often warned how easy it was for radicals to be co-opted when they got a sniff of cash. She is a poster child of the disease.

Sinema is trying to put this move in the best possible political light of course, trumpeting her non partisan street cred and her willingness to create legislation with those on the right. But she never wants to work with those on the left, she is like her compatriot Manchin, they are always forgotten.

“Last month, the voters of Arizona made their voices heard loud and clear — they want leaders who put the people of Arizona first. We need Senators who will put Arizonans ahead of big drug companies and Wall Street bankers.“Unfortunately Senator Sinema is once again putting her own interests ahead of getting things done for Arizonans." Rep. Ruben Gallego (D. Ariz)

The truth is, she has a 37% rating among Arizona Democrats. Gallego would have cleaned her clock in the next primary. Nothing pure about her motives, this move is pure political expediency. She is dreaming if she thinks the right wing in Arizona is going to back her up. I have never seen a politician so despised, across the board. Now, that takes talent! 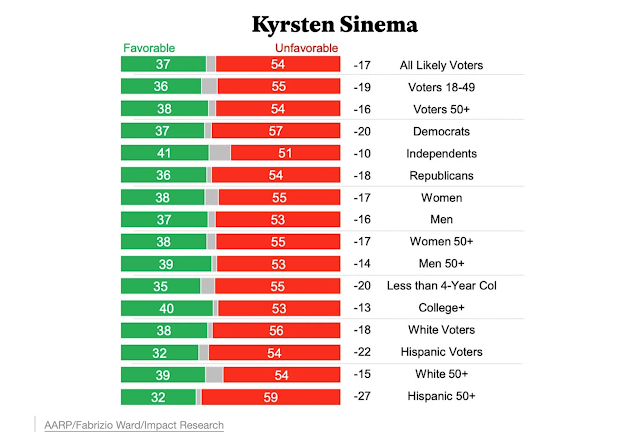 It takes somebody with a personality to craft a centrist coalition. She has none. She is cold and aloof and completely beholden to no one except her big money backers. She has never shown any loyalty or accountability to the people that elected her. It appears from the numbers that Hispanic voters dislike her the most, why is that? But honestly, she fails to find a majority of admirers in any category, including women. She even is disliked by a majority of independents! 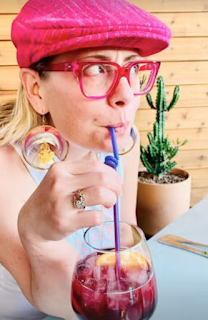 The woman who so casually sported the "fuck off" ring will find that the middle is a very difficult place to be if you have no friends and have a long reputation for burning people.
So long Kyrsten, you will not be missed.
*
“A friend is a big Sinema supporter, someone she knows by name,” Tony Cani, the deputy director of Biden’s Arizona campaign tweeted. “They ran into each other at an event and after warm greetings this person asked: ‘I wanna be helpful, what can I tell my people when they complain about what’s going on?’ Sinema smiled and said: ‘Tell them to fuck off.’”
Posted by Blue Heron at 10:23 AM

Brilliant move Kyrsten!! And if Manchin follows Schumer will be right back where he
started, having to beg for votes. Since all the rest of the Demos are just sheep with
no backbone, S & M hold all the cards. And Schumer has no leverage. And if Schumer has no crook and flail the sheep just might, just might, find another shepherd.

You will always have my vote.

Apparently this was expected as Miss Kris had alienated the home town Dems and they would probably primary her. I think she really likes disrupting things and getting the headlines. She seems to be to the Dems what Ted Cruz is to the Republicans, a little gift from Satan.

I suspect that come Jan, 2025 she will no longer be a Senator… it will be very hard, probably impossible to ever get re-elected as an Independent. Likely, that Jan, she will be working in a high a paying job for one of the financial services companies she has been close to. I think they owe her for the protection that she has given them.