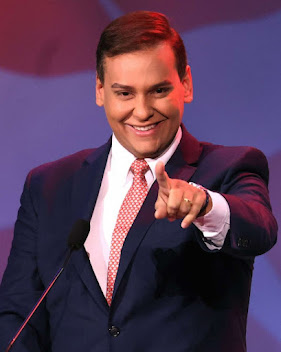 I hate myself for saying this but there is something about the whole George Santos business I find hysterical.

I love the fact that this guy can tell lie after lie after lie, with a straight face, and just not care. Nor apparently, do his cronies in the House.

It's like he was conjured up in Faust. They aren't even good lies, they fall apart instantly and he just shrugs and smirks. "Oh, well. Caught me." He's playing the long game here.

He is going to get away with it, too, Speaker McCarthy even gave him committee assignments today. He may be the worst liar ever uncovered in Congress but his party needs him for the balance of power. And he is quickly becoming a new bro for Matt Gaetz.

Calls to resign will be pointless, he won't resign, he is having the time of his life. He cracks me up.

The Brazilian government has some unfinished business with him over a little theft and check fraud fiasco but it's not like we will ever extradite a United States Congressman. He is safe in the House. Teflon George is slicker than greased goose pucky.

Maybe he is actually a comedian or an author with a Walter Mitty fantasy wanting to see how far he can push the envelope for his book? Can't wait for the next episode.

But he is not going away. He reflects very well on the august body of the house and the integrity of our politicians today and reinforces the reason why we should trust them so. He is no more venal than the next guy but he doesn't care about hiding it. And it gets juicier, yesterday new evidence that he may have been financed by Russian oligarch money.

Have to love this guy. Would be perfect on Saturday Night Live. The unrepentant liar bit. Or even:

I likewise find the George Santos saga hysterically entertaining...and much more fun than Harry & Meghan.
I think that we should breed gay George S to Kari L and see if we can produce a pathologically lying, election denying demon child.

He has been put on the Science and Space Committee…. I think that is appropriate that he be assigned to that Committee… I think I read on his resume that, besides everything else, he is a noted scientist!

By the way, MTG is going to be on the Homeland Security Committee… that is a good thing because from there she should be able to monitor those pesky Jewish space lasers!

I always wondered about Mr. Santos' (or whatever his real name is) sanity when I was President of Baruch College, which position I took over after my stint as the United States' envoy to the United Nations. I always felt a little sorry for him as I was told he had lost large numbers of his family in the Holocaust, he being Jewish and all. I think he always meant well.

I saw into him again, at a finance meeting, years later, when I ran Goldman Sachs after leaving Lehman Brothers as Chief Financial Officer. I did think to intercede on his behalf in the US House of Representatives but unfortunately have no time as I am off to become a member of Prime Minister Netanyahu's cabinet.

P.S. I don't believe he really took that $3,000, intended for a dying dog, from a GoFundMe account. Who would do such a dastardly thing?

I thought his using the fake jewish name for donors was a nice touch. https://newrepublic.com/post/170056/george-santos-fake-jewish-name-gofundme

The election of that man and the lack of expeditious plans to remove him has shattered my faith in government.