I will try to keep this brief.

"If Dems took a shot every time McCarthy lost a Republican, we’d all be unconscious by now." Rep. Alexandria Ocasio-Cortez
Everybody in the world is piling on regarding the House GOP sh*tshow. You probably don't need my two cents. They can't get out of their own way at the moment and things are looking really ugly in their attempts to install a House speaker. 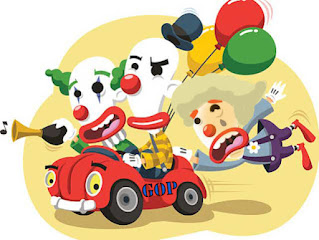 Kevin McCarthy is a stooge who stands for nothing and I have no sympathy for him but like most dems, just want to make popcorn, sit back and enjoy the precious moment.

I would like to point out just a couple things. MAGA and the Trump blessed candidates got their asses handed to them in the Senate midterms.

The country is not interested in extremism from either side at the moment, they want a party that can govern and deal with the economy while protecting reproductive freedom.

If the hard right Republicans want to double down right now, have at it. Should really help them with the young and the independents, both of whom polls show abhor them.

The second thing is that the Dems are probably not much better themselves and are quite capable of the same sort of cannibilistic ritual. Their circular firing squad would revolve more around reparations, anti Israel, open borders, free college for everybody, redistribute the wealth and various other similar disastrous fantasy schemes from the ultra progressive extremes on the left. Zero emissions and soak the rich.

The answer lies somewhere in the middle, hopefully people on both sides of the aisle eventually figure that out.

Meanwhile...the sheep over on the other side of the aisle are thinking 'My God!!!
You mean you don't have to follow the herd and the sheepherder!! After all these years
of having to kowtow to that dysfunctional POS from San Fran we could have had real governance?? We didn't have to sit through two bullshit impeachments and a kangaroo J6
show trial just because Trump said, to her face, she was the worst politician??

The Repubs will end up blaming the dems for their own mess, as usual. Like it's our job to clean up after them.