One toke over the line

As a boomer and a tail end member of the peace and love generation, I have a fairly protracted and intimate relationship with marijuana.

Long a societal taboo, but if you do the math and ask most people in the 65 to 85 year old age bracket what exactly they were doing fifty years ago, a majority of the honest ones would admit to at least an occasional toke.

Apparently, not all seniors are doing so well with smoking today. D sent me this article the other day.

With this note:
Seniors that don’t know how to “maintain.”
There’s a throwback term for you

Interesting numbers.
They need to buy only pure organic. No additives. Bless their hearts

The popular notion is that weed is stronger today and grandma and gramps can't handle the higher thc levels. I don't think so. I think they just got out of practice. I smoked weed in the seventies that would and did put today's best marijuana to shame, including the famous Nicaraguan "wacky tabacky" of 1973 and the legendary Colombian strain of Santa Marta gold. Heavenly stuff.
There are hundreds of cannabinoids present in marijuana besides THC and CBD and we are far from understanding their specific nature. I will say that the pot was far more cerebral and psychedelic in the old sativa days, not to mention sweeter and tastier and that today's more narcotic hybrid strains derived from the indica cultivars pretty much ruined a lot of pot. The skunky buzz got heavy and dull. It may be stronger in some metrics but it is sure not as much fun and not nearly as tasty. The stone is down and not up.
But why can't elders tolerate it like they did in their youth? Maybe they grew out of it? Maybe they grew up? Put away childish things? Perhaps because they had kids and straightened out and then thought they could just pick up where they left off when they found themselves alone in the nest again? Practice makes perfect? My advice would have been to never stop in the first place but what do I know?
The press release gives several potential reasons for the problems the elderly are having with grass, not sure about the last causes cited, which sound a bit specious and unsupported to me.

"Cannabis can slow reaction time and impair attention," the news release states, "which may lead to injuries and falls; increase the risk for psychosis, delirium and paranoia; exacerbate cardiovascular and pulmonary diseases and interact with other prescription medications."

Pot is certainly not for everyone. I have had some very close friends tell me that they had to stop smoking because cannabis use made them "paranoid." But it should also not be startling news that millions of recreational pot users live very productive and responsible lives.

“In strict medical terms marijuana is far safer than many foods we commonly consume. For example, eating 10 raw potatoes can result in a toxic response. By comparison, it is physically impossible to eat enough marijuana to induce death. Marijuana in its natural form is one of the safest therapeutically active substances known to man. By any measure of rational analysis marijuana can be safely used within the supervised routine of medical care.DEA Administrative Law Judge Francis Young - 1988

A friend was in an accident recently and has developed some anxiety. His doctors are suggesting some anti depressives, like prozac. I asked a mutual friend if X had ever smoked pot and he said probably but that he would never do it again. And I think it is a shame, I think a joint would really take the edge off and help round out the corners of his tumult and be much less toxic to his system.
But it will never happen, it is still looked down upon in many circles of polite society and I don't think he would want to risk censure. Totally his choice. Now as a long time cancer sufferer and survivor I had an easier time openly smoking pot, because I could always claim that it was for medical purposes. But the fact is, I never really cared about risking societal opprobrium anyway and for most part it was pure recreation.
I do think your body chemistry changes. I could smoke eight joints in a single setting as a kid, no problem. Now a single toke a week is fine, if that. Been there, done that, truth is I find pot sort of boring. It's basically legal, it is everywhere and I find the quality somewhat suspect. Can't get into all the hype anymore. 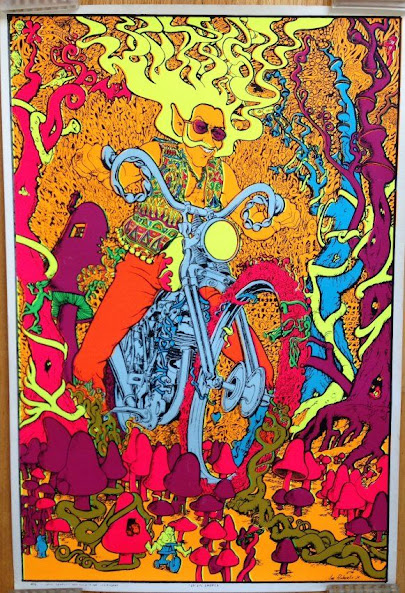 Perhaps one of the things that made marijuana more palatable in the late sixties, early seventies when I started smoking was that there was an actual counter culture then that supported getting high.
Psychedelic artists like Peter Max, Ernst Fuchs, Martin Sharp, Wes Wilson and Abdul Mati Klarwein became very popular.
You had an alternative press, be it Ramparts, Evergreen, the L.A. Free Press, or underground comics like Zap, Yellow Dog, Mother's Oats, Insect Fear and a host of other great titles.
What made that time so fun and exciting was that you could live outside the system if you so chose. People dared to be different.
Being on the outside can be sort of fun. Slightly rounded, not straight.
You had madras bedspreads, garish black light posters, love beads, patchouli, candles, harsh brass pipes, and a whole new visual array of tools to promote maximum mind expansion.
And we had a whole host of psychedelic bands back then to help you lift off the ground on your magic carpet ride. That doesn't exist today.
Watching The View and playing pickle ball is not a reasonable substitute. Listening to Michael Bolton while stoned could lead to a very bad trip. 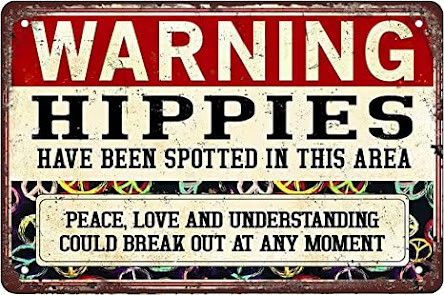 Perhaps we long time smokers should seriously consider acting as guides and mentors for the senior citizen who wants to put their toe back in the water and have a puff.
Pull out the old bong and show them how to have a good time without getting hurt. But they have to bring the milk and cookies.
Posted by Blue Heron at 9:09 PM

The sixties and seventies had their own ambience that can't be recreated with pot alone. The pot was part of a promising counterculture that turned out to be unsustainable and illusory. There was intense pot in the day around but most of it was rather tame. The brain energy field around the dope scene was what made it interesting. My guess is that today's seniors in the ER didn't expect the intensity of the current stuff or they ate too many edibles.

The great mystery of pot is that it works well in the lower dosages but much of the niceness starts to reverse as the dosage gets higher. An unschooled sap sucking on a modern oil cartridge can get way past way too much before they notice the effects (since there is a slight delay even when smoked).

At the end of the day we don't understand pot that well but instead of trying to figure it out we screwed things up by turning things over to marketeers who will work hard to get people taking big doses and building up tolerance so they need more and with the occasional unlucky addict as the price paid. Bummer

I remember some pot from 1970 some vets sent home that was laced with opium! It was so powerful. I had to give it away after I couldn’t focus my eyes when smoking it. High times…L