Back from the table 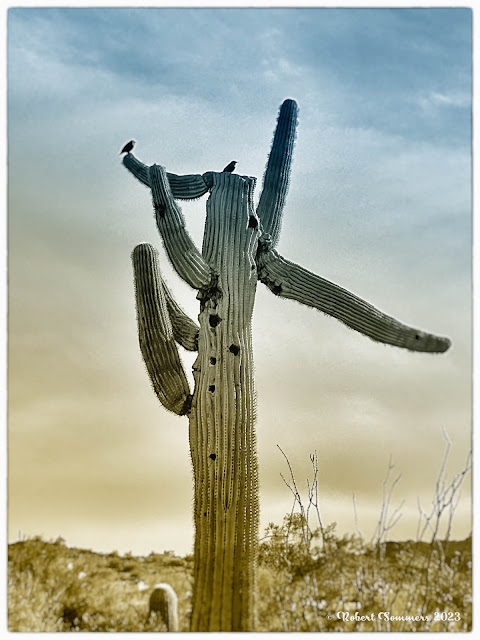 I drove the seven hours to Mesa thinking very apprehensively about the show. I didn't really have the greatest material and my ego suffers when I think I am the low man on the totem pole without bullets in my gun. Was I primed for a fall, after a pretty darn long string of wins? I have sold some great material this year and it is not easy to find and replace the truly great stuff.
Thankfully, I brought affordable material and sold like gangbusters. The traffic was incredible, sales were pretty constant in my booth. Didn't make a killing but did not embarrass myself whatsoever. And I bought some neat things along the way. It was a very successful venture, only diminished by the news that my wonderful friend Terry D. was hospitalized and very ill. Our thoughts and prayers are with him.
I stayed with Sue and Steve the first night in Phoenix and we went to a nice dinner party with mutual friends in Scottsdale, Ben and Debbie. Fred King was there as well as Dain and Sue. Everybody was casual, not stuffy and we all had a lot of laughs. Debbie made a killer cheese dip.
We set up at eight o'clock on Friday and early buyer people started coming in not long after that. Some people depend on early dealer business, I am more of a retail guy. But you are only given until four o'clock to set up and it definitely is harder with these people asking you questions about material.
It normally takes me two full days to set up a show so I focused on hanging paintings and filling my case. I was finished in the nick of time. And this was with a booth half normal size, I can't afford the big ones anymore and the promoters are raising prices up, up, up. Not sure what I will do in New Mexico this summer... Booth prices have basically doubled in the last year.
Afterwards, Steve and I went to Hodori, one of my favorite Korean restaurants, farther south in Mesa, on Dobson. 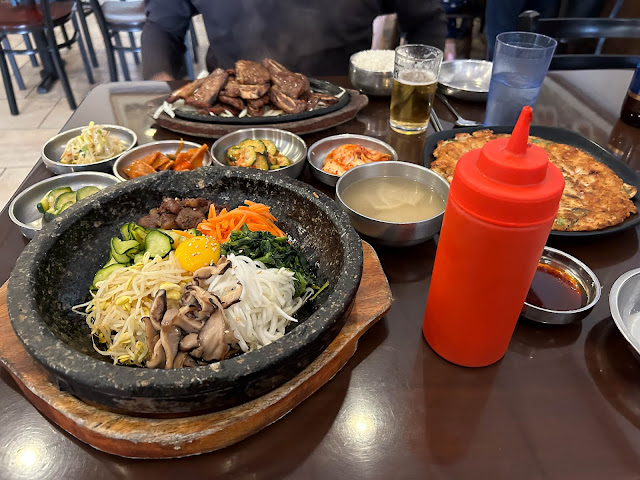 Steve is my most gastronomically adventurous dealer friend and he is always up for great ethnic.
We had a wonderful meal, incredible short ribs, bib bim bap and a seafood pancake. And of course, all of the wonderful sides.
Service was a bit spotty but the food is incredible and I would go back in a heartbeat. 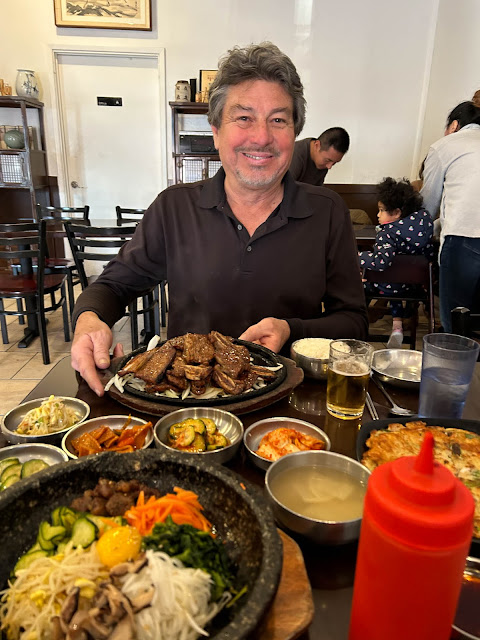 His short ribs were the best I have ever tasted. He liked the caramelized crunchy rice on my dish.
After dinner I found my motel, the Sleep Inn, which was much farther away than I figured, Mesa being a much bigger place than I was aware of. The drive to Superstition Springs took another twelve miles. When I got there they told me that my visa had been twice declined, guess I forgot to pay it last month. Sheepishly I found another credit card. Recharged my heart monitor and slept as best as I could. 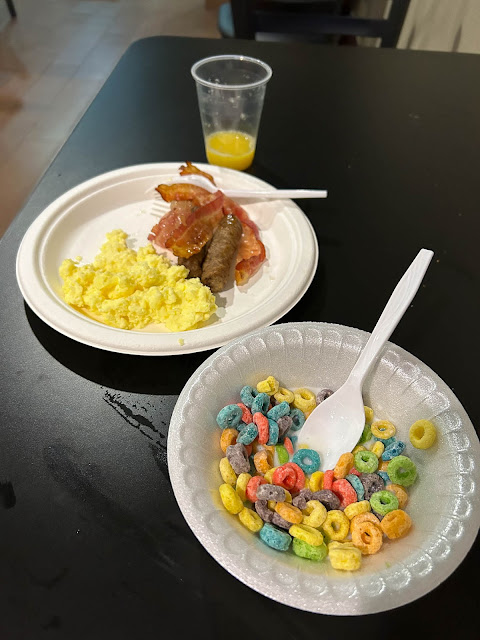 It is a nondescript place located between an autopark and a kiddie park and there was a lot of outside noise all night.
And for those of you who think I exist in some glamorous bacchanalian heaven, this was breakfast.
I had the choice of raisin bran or fruit loops, hate them both, went for the latter.
I think the eggs were powdered, bacon was limp and greasy. Whole breakfast went into the trash. Inedible.
Orange juice was okay. 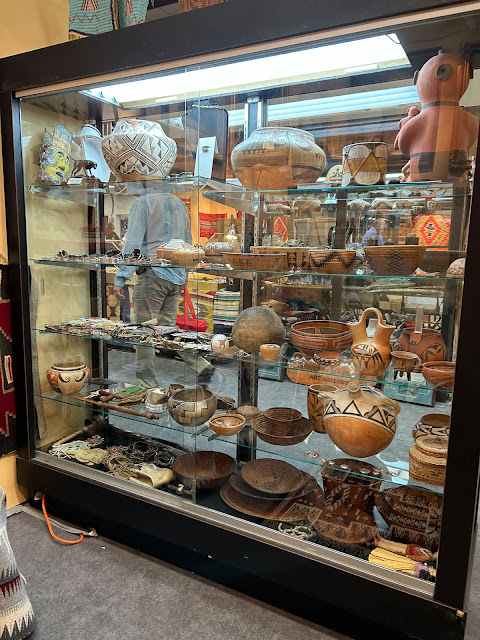 In the middle of the night there was a huge crash above me like a helicopter hitting the building.
I ran down to the lobby with another guest but the front desk knew nothing about the cause of the cacophony.
Freaked the other lady out and I finally calmed her down and told her that it was nothing.
I have no idea what happened but it would not surprise me if someone found a body. 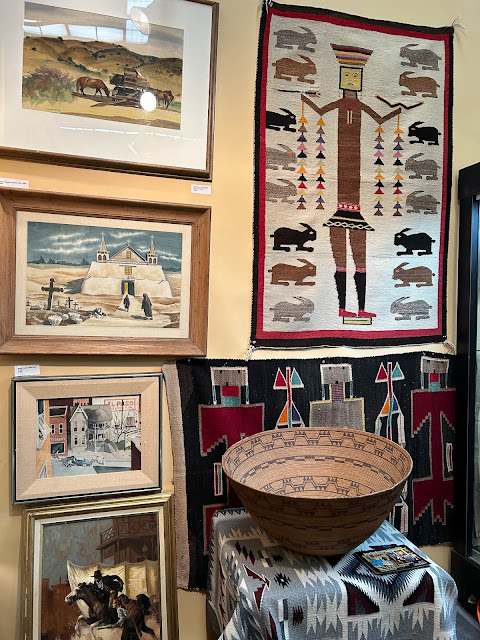 I bought a passel of really nice Western paintings by a famous illustrator and have already sold two of them.
I bought a very nice navajo weaving as well which I might put out at Modernism. 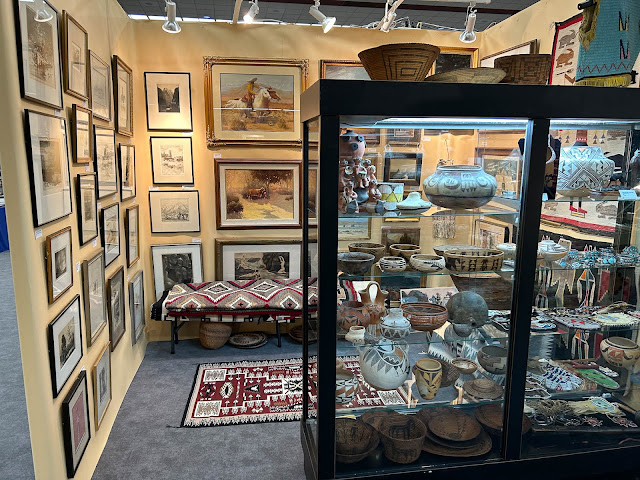 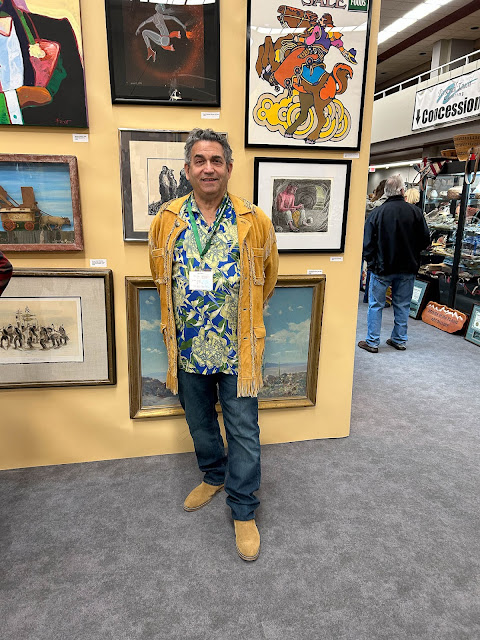 As I said, the show came through with gusto and my low expectations were surpassed very quickly.
I had a nice breakfast with Joseph, Linda and Zim on Sunday morning and the second day even surpassed the first.
You just never know.
Show went until three. I was dead tired and packout took over three hours. I might have been the last one out.
Bought some worthless prints from some Mesa guy who had contacted me through a friend, out of charity. A mitzvah  perhaps.
But he couldn't find the place and it cost me another forty five minutes of packout navigating his arrival.
I went back to Steve and Sue's and we cooked ribeyes, potatoes and squash, delicious. Had a good night's sleep.
Unfortunately, I have caught a bad cold. I was dizzy driving. There was an accident on the ten west and I was not sure if I was moving or stopped. Vertigo. Then the dust storms hit around Blythe and continued all the way past Beaumont, at times almost total whiteout with zero visibility. Makes me glad I don't have a higher profile vehicle.
But you fight the wind every second and can not let your guard down and that is tiring for eight hours. I finally made it. I went in today and unloaded but feel terrible and came back in the afternoon to rest. Hopefully will get better soon as I have an awful lot on my plate and two more shows in a little more than three weeks back to back.
The fun continues...
Posted by Blue Heron at 5:46 PM

Impressive booth man, Glad you had a good time and a successful salesmanship. Good story.

Thanks for sharing the story about your trip. Hope you’re feeling better. That Navaho weaving is very intriguing. Was it created as a trade good?