The first one was California Police more likely to stop, search black teens. And before you bigots out there say they are the ones committing all the crimes, read the article. They are getting stopped and searched, but not arrested at a higher rate. Just harassed on account of the color of their skin.

California law enforcement searched teenagers whom officers perceived to be Black at nearly six times the rate of teens believed to be white during vehicle and pedestrian stops in 2021, according to a state report released Tuesday. Police handcuffed, searched or detained — either curbside or in a patrol car — individuals whom they believed to be Black youths between 15 and 17 years old during a higher percentage of traffic stops than any other combination of perceived race or ethnicity and age groups.

Law enforcement also searched people who were perceived to be Black at 2.2 times the rate of people thought to be white, the report said. And police were more than twice as likely to use force against people they thought were Black, as compared to people whom officers believed to be white.

Yet law enforcement officials reported taking no action most frequently after making stops of people they believed to be Black individuals, as compared to other racial and ethnic groups, “indicating those stopped Black individuals were not engaged in criminal activity,” the report said.

Color blind? Not quite yet.
*
Wonder why your gas bill is doubling? Maybe it is because gas companies make more money sending our domestic natural gas to Europe. See Natural Gas price drops, but not in San Diego.

Court said prices are being pushed higher in part because of liquefied natural gas, or LNG, shipments going to countries in Europe that have been stocking up on natural gas in the face of cutoffs after Russia invaded Ukraine in February. Gazprom, the Russian-owned natural gas company, is the continent’s primary supplier of gas.

“This is about all the LNG we are exporting to Europe,” Court said. “They’re selling our natural gas to Europe because they get a higher price.” The resulting inventory shortages lead to higher prices for U.S. consumers, he said — and the companies can put on the squeeze because “consumers really need it.”

Sempra is a big player in the global LNG export market. It owns a majority share of Cameron LNG, a $10.5 billion facility on the Louisiana Gulf Coast, is constructing an export component to an already existing LNG terminal near Ensenada, Mexico, and has plans to build a large LNG facility in Port Arthur, Texas.

The American Gas Association, a trade organization for gas companies, says the U.S. “has more than enough natural gas to satisfy the current level of exports and more while keeping prices affordable and stable for natural gas customers.”

SDG&E and SoCalGas insist the companies are not profiting from the January price spike.

Third thing and the most shocking, on a human level. According to a new survey, Americans are facing a serious shortage of close friends. Friendship is declining. Twelve % of the population have no close friends? That is sad and terrible. The number of people with ten or more friends has dropped over 65% since 1990. Tragic.

The number of close friendships Americans have appears to have declined considerably over the past several decades. In 1990, less than one-third (27 percent) said they had three or fewer close friends, while about as many (33 percent) reported having 10 or more close friends. Only 3 percent said they did not have any close friends. 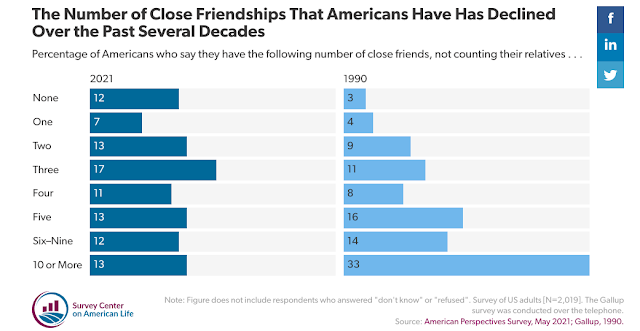 Reach out, make a friend, you will feel a whole lot better.
Posted by Blue Heron at 7:56 PM

This might account for the statistic: in my life as a Boomer, many close friends are now dying. My best friend since second grade just died. You can't make a friend of 70 years overnight. I have made new friends, but if the oldest and best are dying, it's not a mystery that you have fewer of them.

Good point but you need to be open to new friends.