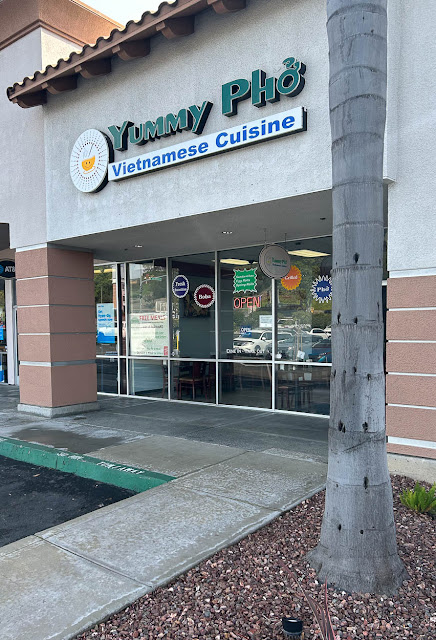 I was hungry coming back from the doctor's visit today and I decided to stop at one of my tried and true Vietnamese restaurants, Yummy Pho.

Yummy is located at the southeast corner of College and Oceanside Blvd. in Oceanside at the Rancho Del Oro Gateway Shopping Center.

I have been coming here for a couple years and while in no way would I call it fancy or exceptional, it is pretty dang good and today it hit the spot.

I ordered Bun Bo Hue ( Bún Bò Huế ), one of my go to dishes. Huế is the old imperial capitol of Vietnam.

The city of Huế was named Vietnam’s capital in 1802 when the Nguyen Dynasty seized control of the country and ruled from there.

This famous soup from Central Vietnam was dined on by royalty and peasants alike and is a favorite of the entire province to this day. 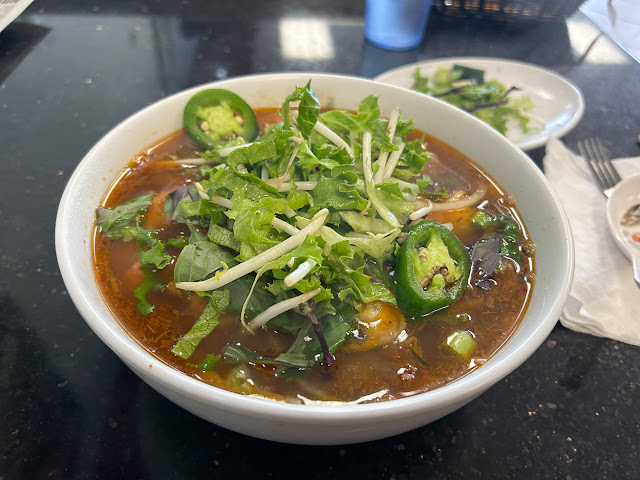 This noodle soup is much spicier than your normal pho dish.
It takes many hours to prepare properly and typically contains lemongrass in the broth, while pho does not.

Extremely authentic recipes use cubes of pig blood, mine did not have them today and I don't particularly care for them but will eat them grudgingly.

It can also contain thin slices of marinated and boiled beef shank, chunks of oxtail, and pig's knuckles.

The soup is typically garnished with basil, lime, cilantro, jalapeños and sprouts.

I had a combo version today with shrimp, chicken and beef. It was delicious.

I was frequenting this establishment during covid and felt sorry for them, was often the only person there when times were bleak. The older man who worked there would often make me a banh mi sandwich.

And his sandwiches often bugged me because some elements in them would be hot and some would be very cold, unlike the sandwiches I had elsewhere. I summoned up some courage and asked the younger guy who works there today to explain why this occurred?

And he told me that is how they are supposed to taste, with differences in both heat and texture. Well, now I know. 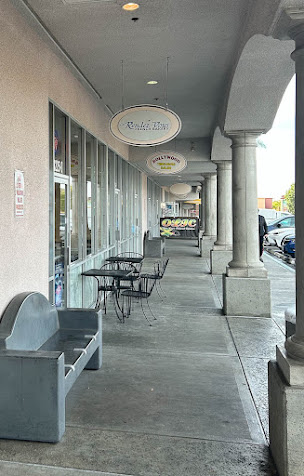 Yummy is located pretty close to a really good French Vietnamese bakery, Le Rendez-vous. It would not surprise me if they were co-owned. I have not eaten there a lot but have had a wonderful almond croissant there in the past.

Alex, who originally told me about Yummy, was knocked out by the bahn mi bread, which he said was made at Le Rendez-vous. 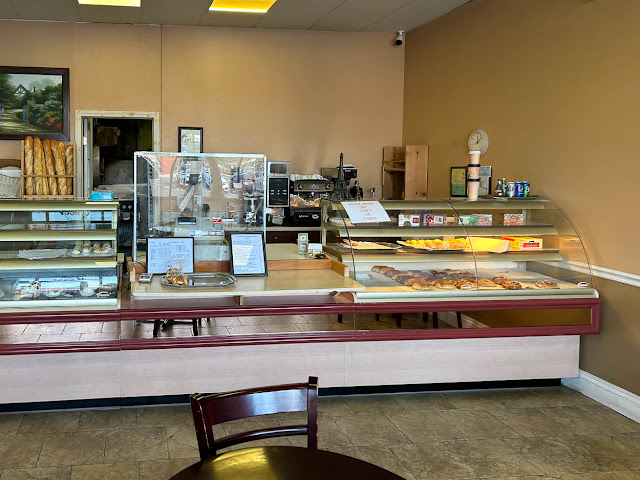 I was tempted to buy a baguette but was afraid that I would eat it on the way home and did not.
Bought a nice apple tarte tartin from a very limited mid afternoon shelf today instead.

Both establishments are worth a shot.