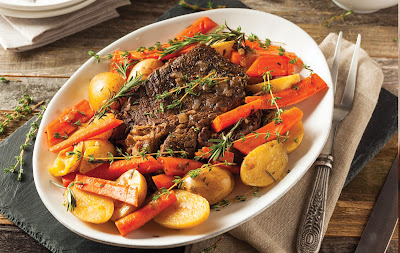 Leslie and I were playing cards and talking last night when she made a rare malaprop.

She was talking about a punk band and instead of saying Limp Biskit, she said Limp Brisket. Completely unintentional.

And I cracked up, thinking about how tribal it sounded. Very Jewish.

"Yes, they are playing on a double bill with the Steaming Latkes."

I mentioned it to Barry this afternoon and he suggested pairing Limp Brisket with Gefilte Joe and the Fish. Now that would be a concert.

The whole thing reminds me of one of my favorite jokes which I will try to remember here for you.

Guy is talking to his buddy and says, "Boy did I put my foot in my mouth. I really blew it."

I was trying to take the train to Pittsburgh and the woman behind the counter was quite buxom. Instead of asking for two tickets to Pittsburgh, I asked for two pickets to Titsburgh. Boy was I embarrassed. I don't think I'll ever be able to live it down.

His friend says, "You'll never believe this but the same thing happened to me. I am sitting at the table having dinner with my wife and I meant to say please pass the salt."

"You ruined my life, you fucking bitch."