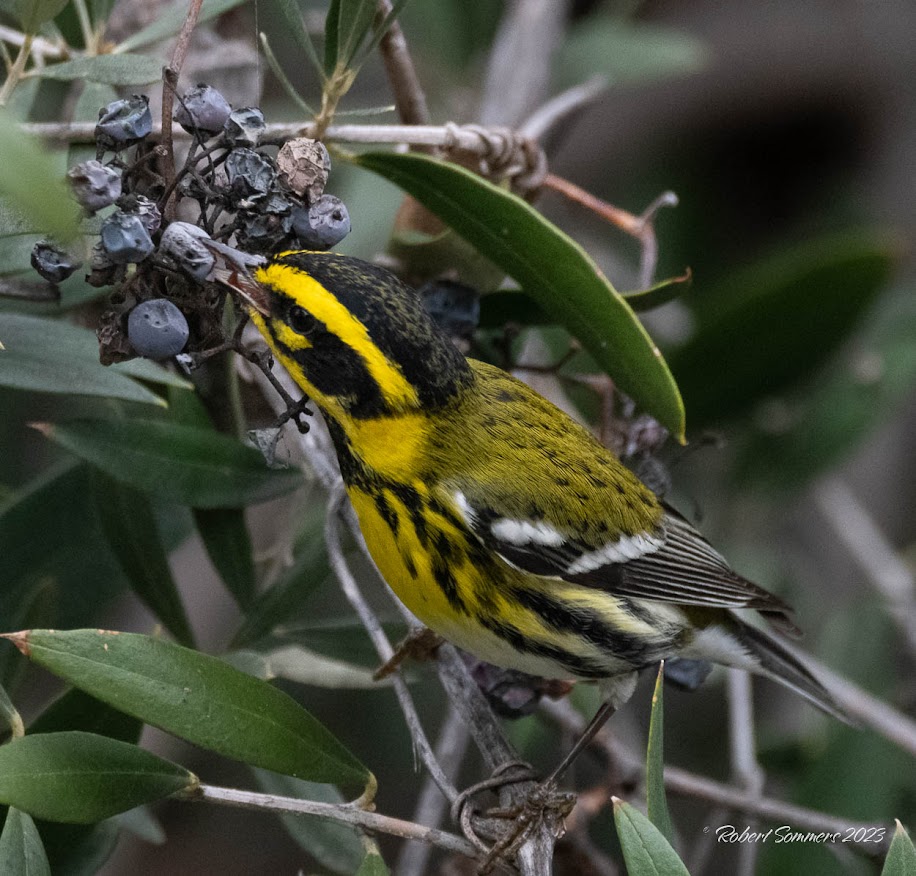 You know the story about the kid who gets so ecstatic about stepping in the pile of poop, because he knows there just has to be a pony around somewhere? I was thinking about that yesterday, because I generally feel that way about January.

Cold, bleak and wet, but it also means that in a mere eight weeks we will be right in the middle of my favorite month in Southern California, March.

March is when the purple ceanothus blooms, when the hawks hatch, the wildflowers pop, really my favorite time of the year. I think the most beautiful.

Having said that, the winter has its charms and especially this winter. There is a lot of bird life out there, continuing to fatten up from their migration or a few more months of cold. 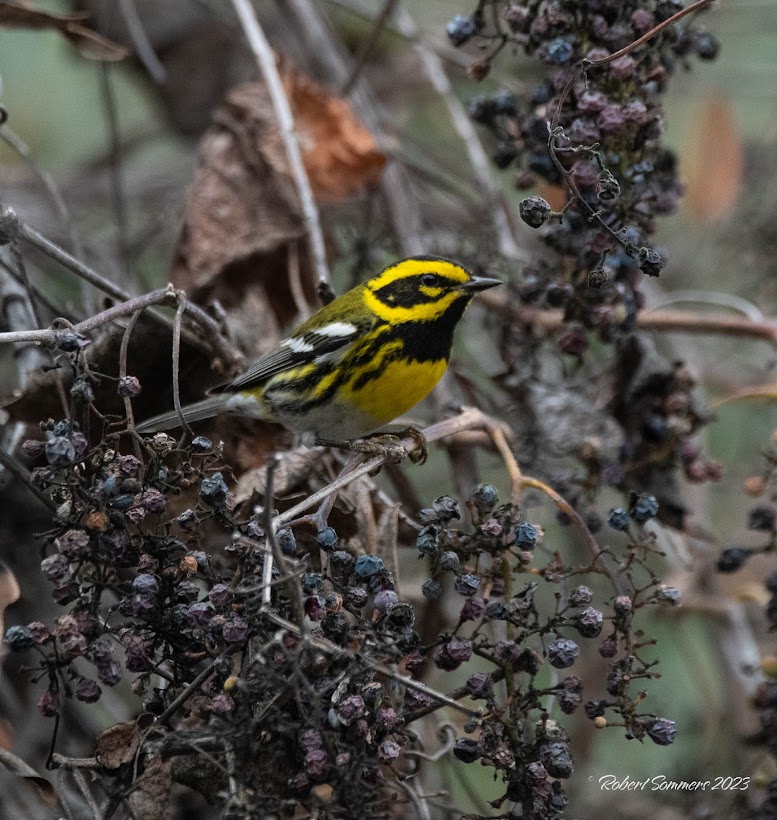 I went back to the dogpark and got some swell pictures of the Townsend's warbler yesterday, careful not to step on the thorns that cover the ground in front of the wild grape this time.

I am pretty sure I saw the female yesterday too, it doesn't look all that different than the male in this species. 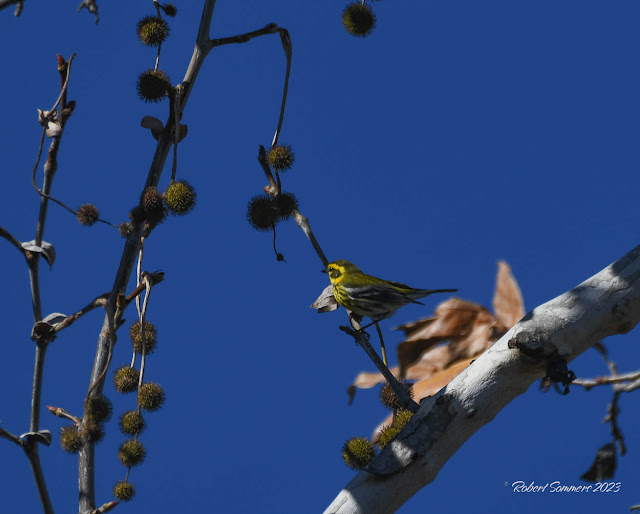 I think this was the female that I shot high in the sycamore yesterday. There is a tiny spot in the back of the dark eyepatch that the male does not have on this side of his face. In addition the chin area is more yellow with the female. 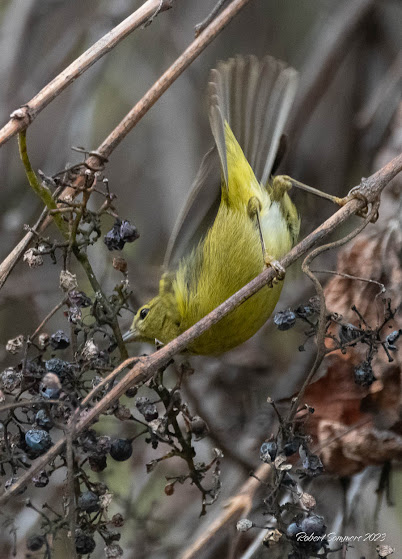 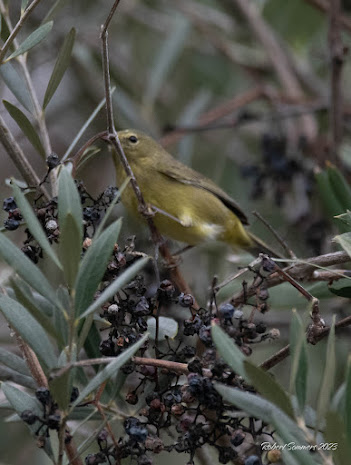 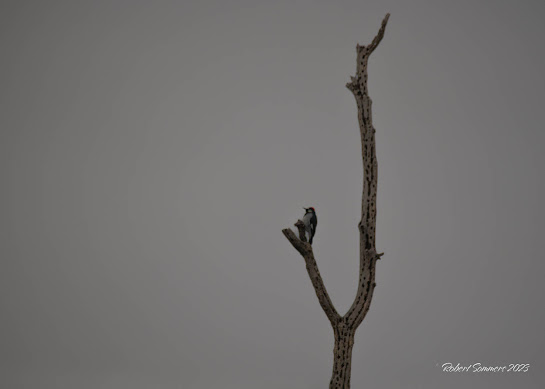 I drove back on the cold, blustery afternoon and saw in the far distance an acorn woodpecker saluting the day.
He was perched on the top of the tall, dead tree that acts as the de facto herald to the entrance of our Santa Margarita River Valley.

Dead trees are very important in the ecosystem and provide important structure and habitat for birds.

I hate it when one falls down, even miss the old SDGE power poles that used to run through the valley.

I wish that they had left them. 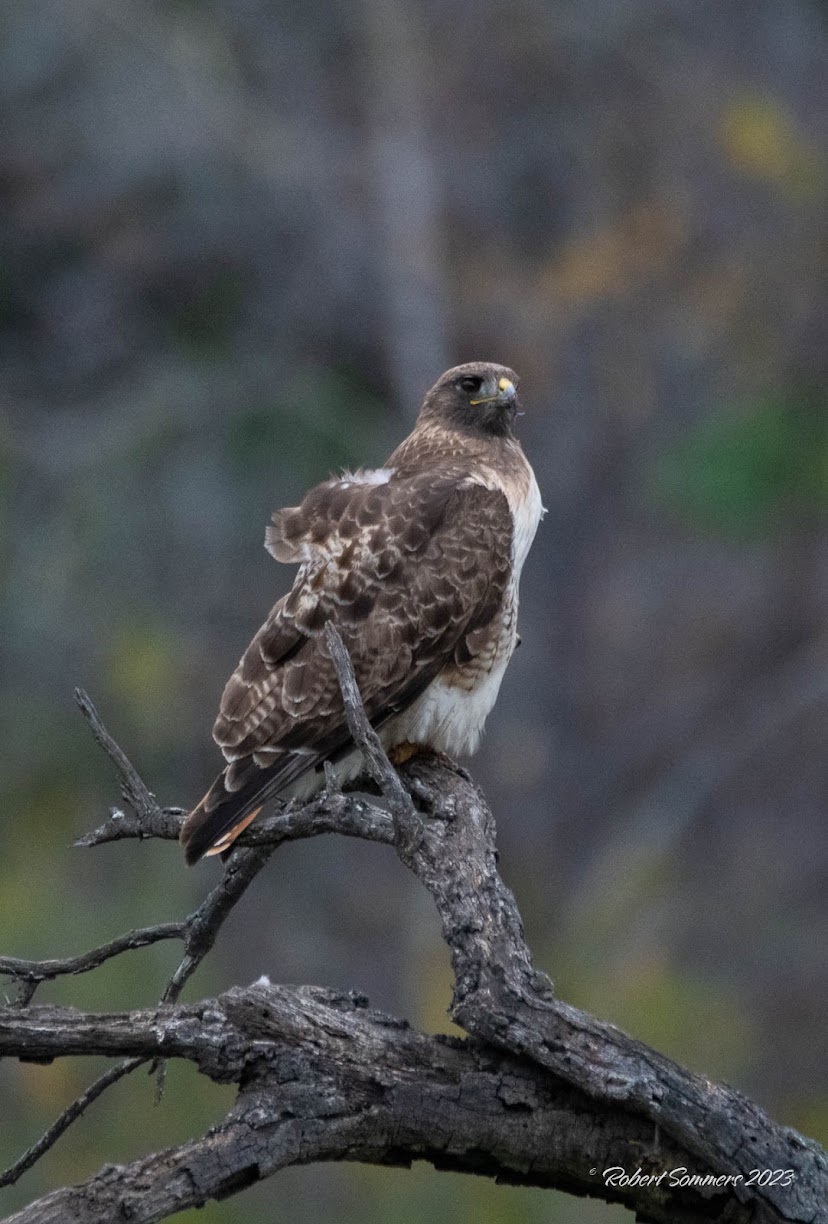 I continued on my way home and caught this gorgeous red tailed hawk sitting on an old tree not far from my home and took some pictures. 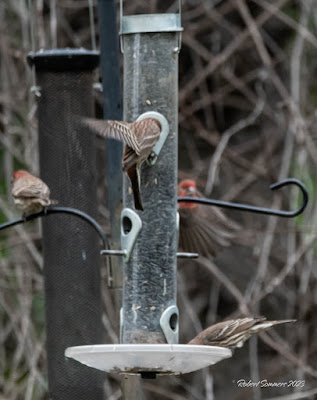 I got home and saw that our feeders were empty. I filled them and the house finches went crazy, had themselves a little frenzy. 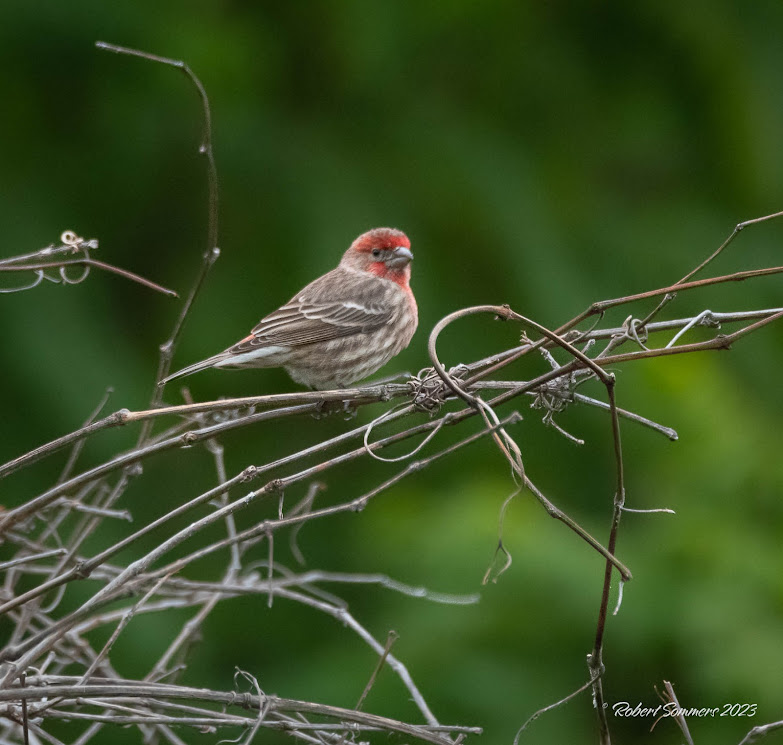 As I say all the time, such a plain name for such a lovely creature! Surely they could have come up with something more magnificent and lyrical?

I stood out in my yard, weeds growing inches by the second and suddenly didn't want to go inside at all. So primal out there, river and creek loudly gushing, it was all going on. 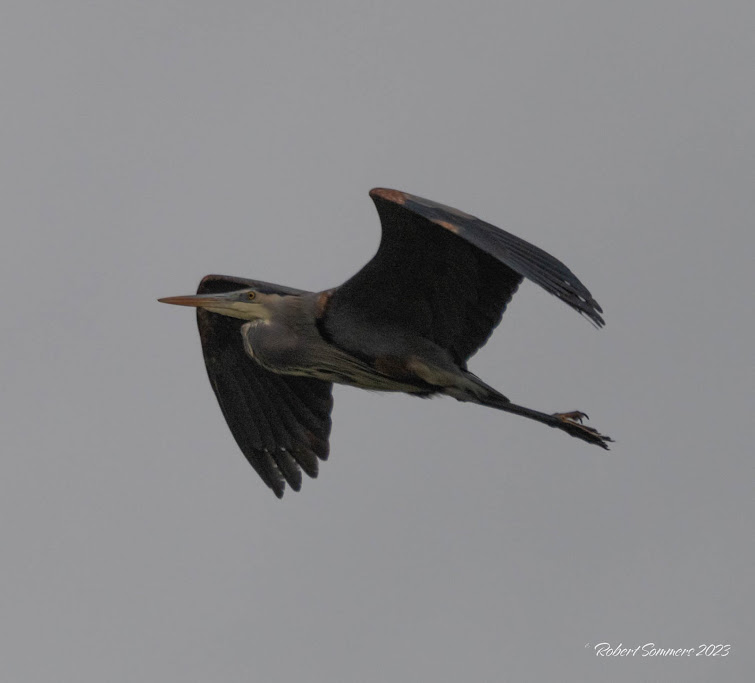 A blue heron sailed by overhead, my eponymous friend. I watched two red tails cavorting in very tight fashion, probably a mating ritual, then get chased out of the neighbor's yard by a mockingbird.

All was right in my world.

I drove in this morning, was amazed by the amount of water in Rainbow Creek near the glass house. 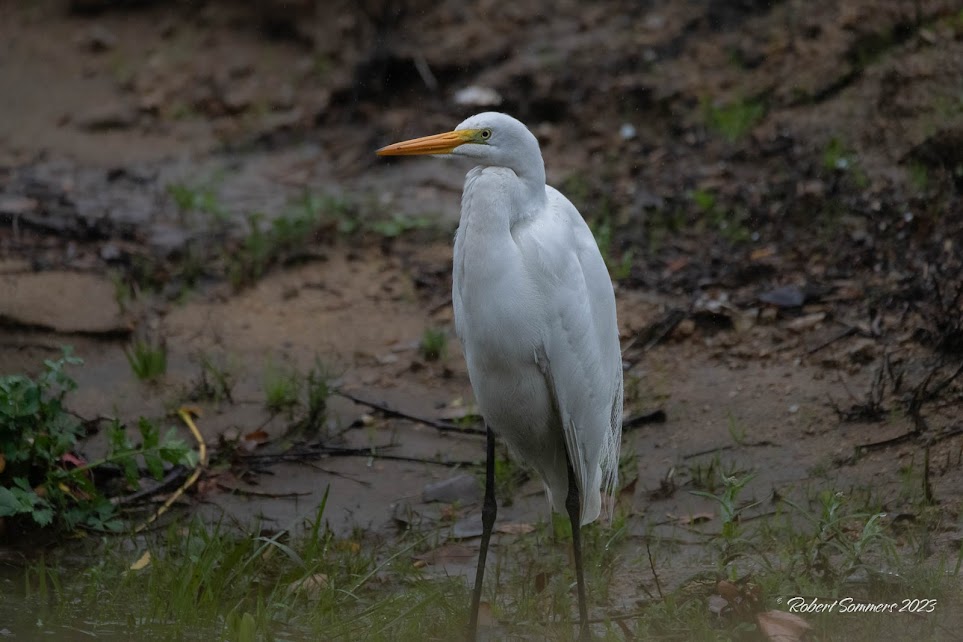 It was raining pretty hard but I stopped at Old Town on Brandon anyway and took a picture of the greater egret in the creek, he likes to fish there when the water comes up and I always take his arrival and presence as a positive portent. Did you know that you can tell the difference between a greater and a snowy by the color of their legs and bill?

Be safe everybody and enjoy your space, wherever you are! Raw and powerful here. Rain and all, this is a beautiful time! 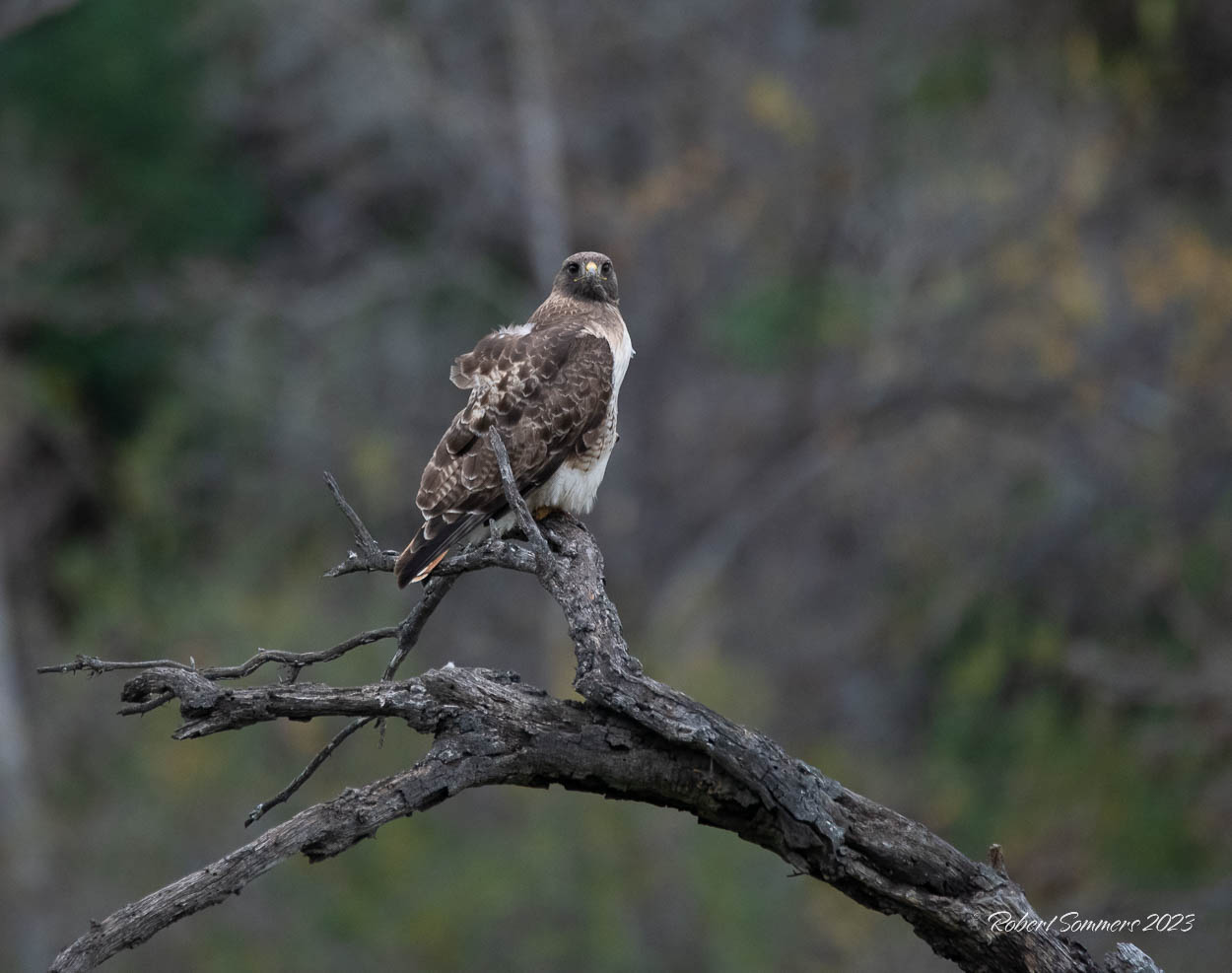 Robert, You have such a great eye for beauty and a wonderful love of nature. You are so blessed to experience the world and such a positive, interactive way, my friend 🙏♥️🎶