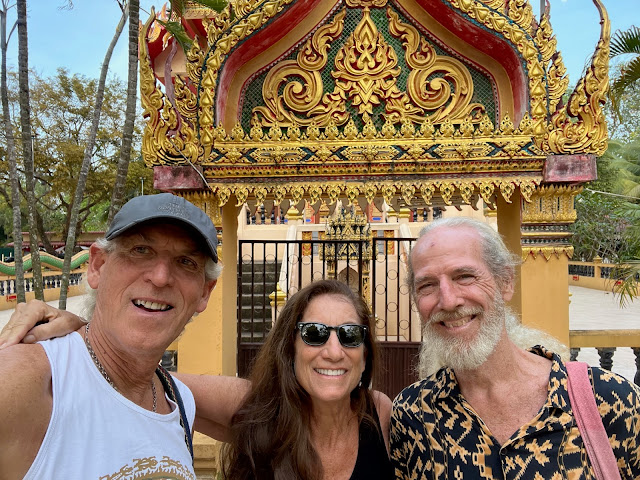 Lena and Ron are two of my best friends and they are in Asia for three months. Lena is really like a sister to me, I miss them both a lot. We pretty much talk every day when they are stateside. But they look to be having themselves a great time in Thailand. Here is a pic of them with our dear friend Shawn.

She blogs her trip at Rice is Sacred. But she sends me nice letters on occasion. I got one last week, they had to change hotels because the Russian tourists were so loud and obnoxious. Go figure.

I got this note from her today which I think is okay to share with you:

We have discovered this small restaurant and it’s a gem in the tiny village by the sea we are staying on another island - Koh Phangan.   We’ve eaten here three outta four nights and it doesn’t disappoint! I asked the Waiter/Owner (his name is Suzi!) if the red snapper was fresh and he looked at me with some level of insult and said with his lisp, yes of course, everyday.  He proceeded to tell us he would deep fry and debone and put all the filets of fish beneath fresh tamarind sauce with pineapple and red peppers and a few pepper corn.  It was in- f*cking incredible.  With fried crispy Thai Basil leaves on top.  Oy!  We feasted!  We had a bowl of acorn squash and chicken in a light red curry sauce with it and rice.  A large bottle of beer rounded out our feast.  Cost 700B - $22 with small tip.

Robert we were wishing you could have been there to share it with us.  It was so good. Gonna have that again for sure.  His other super dish is “tempura prawns” but his batter is more like panco and super krispy.  With sweet chili dipping sauce.  Oy so good. 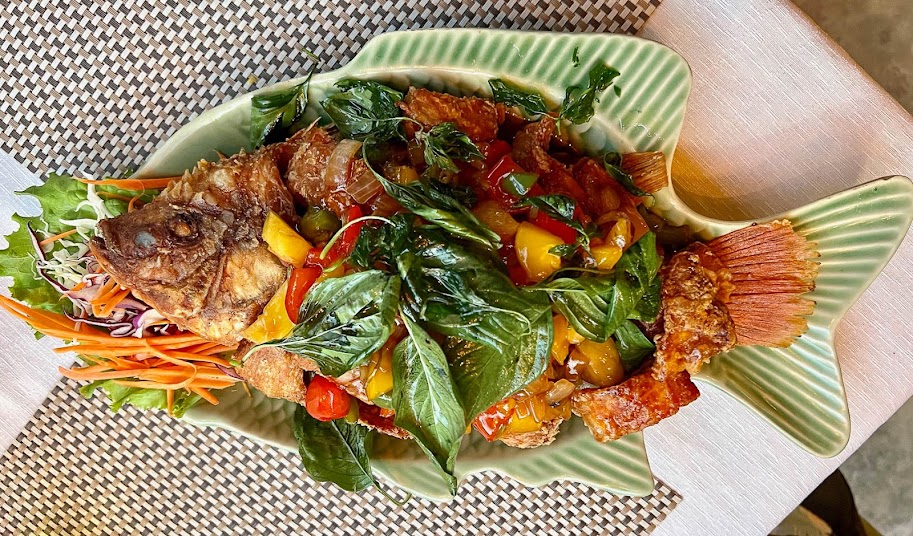 Lena does not lie, the meal looks pretty freaking delicious! And I love the plate. Wish I had a bite.

Hi! Is it possible to get the name or location of this restaurant? Thanks!