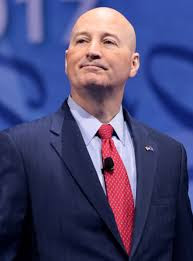 Pete Ricketts is a rich kid. His even richer father Joe founded TD Ameritrade and owns the Chicago Cubs. Daddy is a racist islamophobe who liked to engage in birther conspiracy theories when Obama was President.

Pete is also a real piece of work, he is giving DeSantis, Kemp and Ducey a run for the dumbest Governor award. He just announced that he will withhold Federal Coronavirus relief funds to any county that requires that its citizens wear masks in public buildings. It is a big chunk of change, about $100 million dollars and controlled by the Governor.


A spokesman for Ricketts told the Omaha World-Herald that counties requiring masks risk losing the funds provided for them in the federal government’s CARES Act. The legislation gave Nebraska about $1 billion in relief funds, including $100 million for counties, cities and utilities. Ricketts is in charge of distributing that money.
"Counties are not prohibited from requiring masks, but if they want CARES Act money, they have to be fully open, and that means they cannot deny service for not wearing a mask," Ricketts spokesman Taylor Gage told the newspaper.

This is so stupid. It is not like Nebraska hasn't been hit hard by the virus, they have. 17,549 confirmed cases, 244 deaths. The local governments need the money bad. He is literally going to make them suffer for it. What a total asshole.
Posted by Blue Heron at 10:06 PM

Calling him an "asshole" gives ass holes a bad name! He is worse than that!!