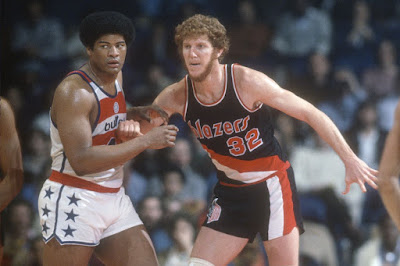 Basketball great Wes Unseld has died. Unseld was one of my favorite centers of all time.

He was undersized for the position but he was an absolute bull, a powerful force, great defender and tenacious rebounder.

I fondly remember the Baltimore Bullets star giving Willis Reed all he could handle back when I was a Knick fan.

Of course basketball was a different game back then, there were fewer teams so the talent was not as spread out and thinned down and people played actual defense. It was a tougher game and no one was as tough as Wes Unseld. My brother and I used to emulate his fadeaway jumper and fierce picks when we played hoops in the driveway.
Posted by Blue Heron at 10:18 PM

Wes probably played his best ball at Forward with Elvin Hayes at Center. Standing 6'7" with a wingspan of about seven feet he was of very large build and outweighed most any other player on the court; imovable when positioned under the boards. Everyone loved Wes. RIP

Definitely. Incredibly strong but he also had a nice shooting touch for a man his size.