How can it be that the homosexual movement, at one or two percent of the population, gets treated with such solicitude while the Catholic population, which is over a quarter of the country, is given the back of the hand? William Barr

I have always had rather queasy feelings about our Attorney General, William Barr. His end around and deceptive statements and redactions in the Mueller probe only reinforced my angst. But could it be that the man is still at heart a self righteous racist, homophobic and anti semitic bully? Quite possibly. Once a bully, always a bully. Jimmy Lohman, now an attorney in Austin, but an old classmate of the Attorney General in both junior high, high school and college wrote an article about his sadistic behavior way back on November 18, 1991.

"Barr was a sick and sadistic kid. He's come a long way from terrorizing seventh graders just because they wore racial equality buttons. Now he gets in front of cameras and says things like 'I am committed to the aggressive protection of civil rights and a Justice Department under my leadership will not tolerate discrimination.'"

And his christian virtue evidently did not extend to those outside of his faith.

The 1991 description of 1963 Barr’s harassment sounds eerily like the 2020 Barr. He “lived to make me miserable,” with a “vicious fixation on my little Jewish ‘commie’ ass,” Lohman alleged, because he wore peace and racial-equality pins. He said the four Barr brothers picketed the school’s “Junior Carnival” because proceeds went to the NAACP, and he alleged that Billy Barr, the “most fanatic rightist” of the four, later “teamed with the New York City riot police to attack anti-war protesters and ‘long hairs.’ ”

I read this article in the Washington Post recently, So this is why Bill Barr is such a bully by Dana Milbank.

Childhood bullies have a predisposition to become adult bullies, research shows, and, sure enough, it seems Attorney General William Barr was a teenage bully more than 50 years ago.
Back in 1991, during Barr’s confirmation to be George H.W. Bush’s attorney general, lawyer Jimmy Lohman, who overlapped with Barr at New York’s Horace Mann School and later Columbia University, wrote a piece for the little-known Florida Flambeau newspaper about Barr being “my very own high-school tormentor” — a “classic bully” and “power abuser” in the 1960s who “put the crunch on me every chance [he] got.”

To those of you who can't get through the WP paywall, here is another rundown at the Daily Beast, Bill Barr bullied me because I supported civil rights.


He and a buddy of his made a habit of harassing me every time they saw me because I wore pro-civil rights buttons. They would team up and try to scare me, knock me out of the way when they went past me in the hallway and grumble about me being a “pinko.” I made it my business to avoid them.
Barr and his brothers were all known for their extreme right-wing views. One year they even picketed the “Junior Carnival,” an annual charity fundraiser, because the proceeds were going to the NAACP. When I got to college, I learned that Barr had earned a reputation there for teaming up with riot police to attack anti-war protesters and “beat heads” right alongside them.

Why does none of this alleged behavior surprise me? Because those of us who grew up in the 1960's and 70's met plenty of William Barrs. It doesn't appear that this man has changed one bit, this nasty bully and fraud swaddled in evangelical robes, with no apparent respect for the law. Here is the original story screenshot from Tallahassee. 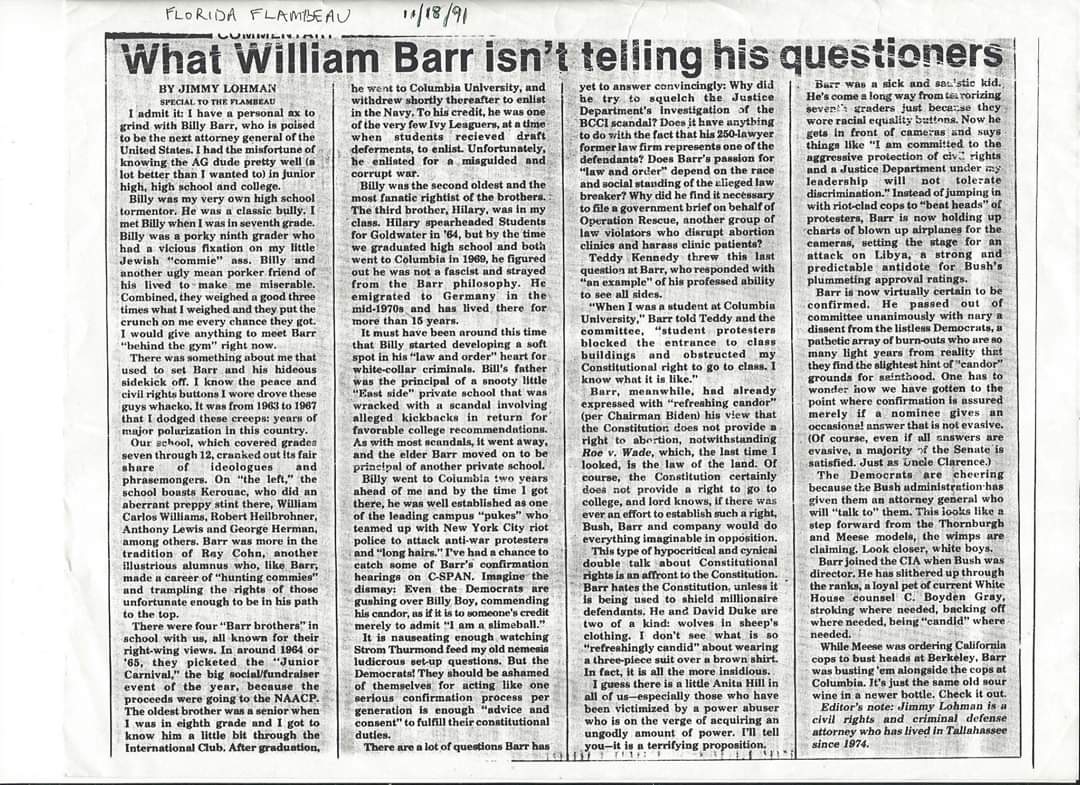