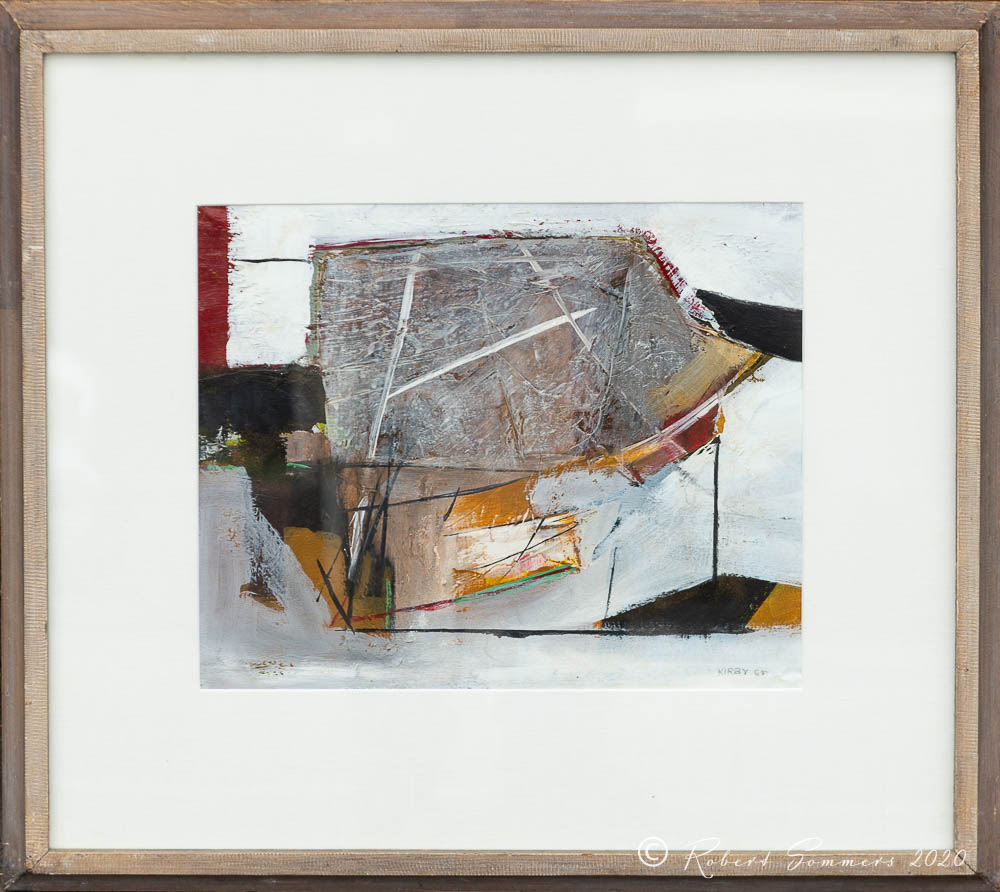 I bought this modernist abstract painting sometime b.c. (before Covid), maybe in January? The mat had discolored over time and I gave it to my framer to replace. Then Covid 19 hit and she couldn't get any framing materials delivered. They finally came. I picked it up the other day. I really like the piece. And I like the original frame. Glad that I kept it. I couldn't get any linen so we went with a mat with a linen texture and it looks great.

I wish that I knew more about the artist. Here's what I do know: Sheldon Kirby (1924-1990) was born in Jacksonville, Florida. He grew up in Los Angeles, earning his Bachelors at Pomona College and an MFA at the Claremont Graduate School in 1954.  He was a student of both Millard Sheets and Henry McFee. He spent time in Spain and Turkey in 1959 and 1960, an interlude which became the subject for a series of works shown at the Sander Gallery and the La Jolla Museum (which later morphed into the La Jolla Art Center.)

He received a U.S. State Department Fellowship and did a stint teaching in Peru, exact date unknown to me. He evidently spent much of his life in the San Diego area. He started teaching in the San Diego school system in 1955 and had a one man show in La Jolla in 1957 and then again in 1968. There is a monograph of his work available that I might buy although it is expensive. I am checking to see if this piece is illustrated in the book. It is titled Sheldon Kirby: Paintings, Constructages, Sculpture, Gouaches; a Survey, 1957-1968. [Exhibition at La Jolla Museum of Art] August 1 Through Sept, 1, 1968. He was also evidently a printmaker, Annex is selling one of his Black Folio series from 1961.


Donald Brewer arranged in 1968 for a major retrospective of Kirby’s work at the La Jolla Museum (the former Art Center) that prominently featured his constructages as well as painting and sculpture, saying: “Of any San Diego painter, (Kirby) seems to know exactly what he wants to achieve and how to get there. He has at his command a tremendous ability and technical capacity.” In San Diego Magazine, John Baldessari is further quoted as saying that: “Sheldon Kirby emanates a tough-minded certainty about painting and consequently about life in general. His outlook seems to be this: no compromise. Perhaps this manner is the force that gives his paintings such an authoritative and knowledgeable look. I’m certain that this inner-directed attitude has good effect. I think it’s contagious.”

I like this painting. I am glad that I purchased it. It has artistic integrity and is not consciously overdone. Shows a rather light hand chromatically and has a nice textural quality. Oil on paper. Measures 14 x 17" image. Signed and dated 1965 lower right. Slight paper deformation at corners. Here is his rather cryptic Askart bio:

Artforum has a review of a 1966 show which I do not have full access to, regarding his Talisman series:


At La Jolla’s Jefferson Gallery is a dramatic two-man show of paintings and drawings by former San Diegan (he now lives in San Bruno) Fred Holle and oils and sculptures by Sheldon Kirby. There is a broad gulf between the large and little works of Holle. His black-and-white and pastel drawings are sensitive, semi-classical, delicate figure studies in which the artist proves himself a master draftsman. His recent oils, on the other hand, are as violent in aspect as the sketches are gentle. Curiously elusive—they are deliberately incomplete—these are striking portraits, dark, moody and finely-wrought, of mysterious, hideous human forms that in atmosphere are vaguely reminiscent of Goya’s last paintings.
Sheldon Kirby is represented by his “Talisman” series of more-or-less Expressionistic oils and about eight vigorous little abstract bronze sculptures, two of which are partially encased in...
— Marilyn Hagberg

I am always trying to learn more about San Diego painters so if you knew Kirby personally or get any more information about him, please let me know. 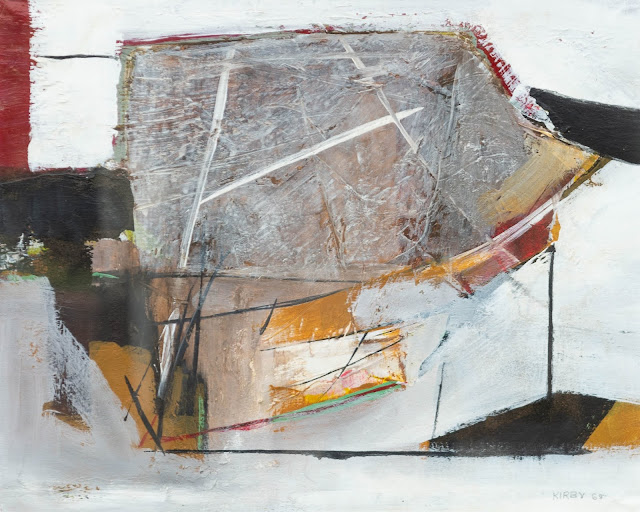 Hi Robert,
Hope you're doing well. I have sold many Sheldon Kirby works, from large-ish oils to constructages and examples of his Talisman series. He was one of the main painters at the Art Centers in house school, teaching there from '56 or '57 to 1964, and highly thought of with many awards at the time. I worked with his son for several years placing his stuff.
~dave

I am Sheldon's son Matt Kirby, I am happy to provide you with more info if you desire
mkkr2012@yahoo.com

That is very nice, Matt. I have sent you an email.