As most are aware, our President has rescheduled his Juneteenth rally in Tulsa, which happened to fall on the same day as the infamous 1921 Tulsa race massacre where over thirty five black owned blocks were burned and three hundred blacks were believed to have been murdered by a gang of angry white people with approximately 800 more people seriously injured. 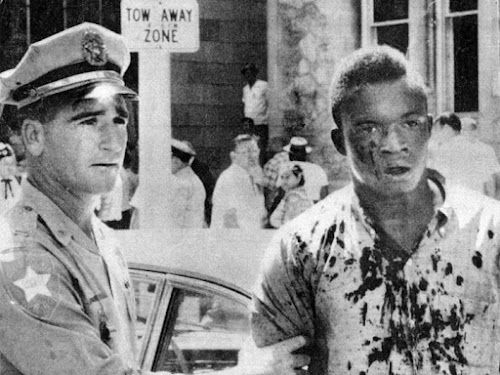 What I found most interesting was that the newly scheduled Republican Convention in Jacksonville falls on the notorious day of August 27.

That day is known in Northern Florida as Ax Handle Saturday.

This is the same day that back in 1960, white protesters in Jacksonville chased and beat protesters and pretty much indisciminately pounded any black person in sight with baseball bats and ax handles for having the temerity of trying to integrate segregated lunch counters.

According to the Florida Historical Society, the attacks were organized by the KKK. Are these people at the RNC completely tone deaf or is this merely scripted dog whistling? The coincidence is almost too much to take. I hate to say it but what's next? Could they have picked a more notorious day and locale if they tried?
Posted by Blue Heron at 5:34 PM

It's only a number, Mr.'look what I found on Google to shore up my moderate intelligence quotient'. Shall we delve into every day of the fuckin' year and come up with what Democrats burned and looted during Reconstruction? How bout cattle prod Tuesday...infamous. Or Bullwhip Thursday?

'Ax Handle Saturday'...who was holding the handles...hmmmm? Southern Dixiecrats, your
brethern and soulmates. In actuality it is the Republicans who are riding in with
the big tent full of the lowest unemployment in US history across the board, the finest economy ever produced. Turning 'Ax Handle Saturday' on it's head. Instead of racial division, burnin' and lootin', they're bringin' in prosperity.

Meanwhile, back in the Leftist cities, it's business as usual, give us more or we burn
this sucka down. Set our felons free. Give us more or we'll take it. Shut down the police so we can take it all.