The Supreme Court, in an 8 to 1 decision, will let the January 6 committee have Trump's records relating to the untoward happenings of that day. The House committee had asked for a trove of documents related to the events surrounding the riot, including records of communication between the White House and the Justice Department leading up to Jan. 6.

Trump objected, asserting executive privilege, but President Joe Biden declined to back up that assertion. Instead, he directed the National Archives to hand over the material.

Now the court has spoken and the veil will be lifted on the attempted coup and insurrection. Should be interesting. And also interesting is the fact that the only dissenter today was one Justice Clarence Thomas, whose MAGA stalwart wife Ginni once cheered on the rioters. 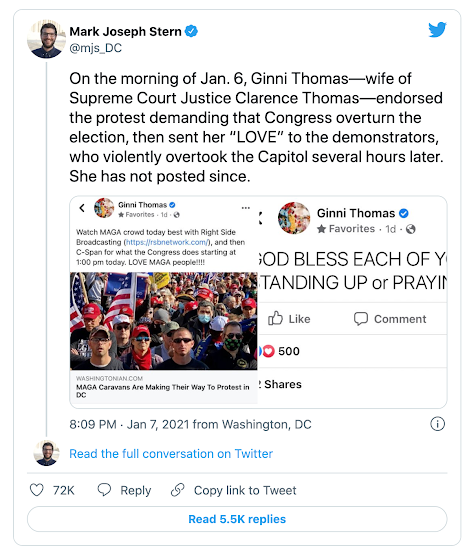 I don't blame you Clarence.
Happy wife, happy life and you certainly don't want to piss off your Ginni.
Hear tell she gets madder than a pubic hair in a pepsi can.

Shameless. Only 13 Republican house members voted for last year's infrastructure bill. Now many of the rest of them are clamoring to take credit for it.

Innocent much? Eric Trump and Trump Organization Chief Financial Officer Allen Weisselberg invoked their Fifth Amendment rights more than 500 times when questioned by the New York attorney general’s office for its investigation into the company’s finances, according to a Tuesday court filing.

Interesting that the 3 Justices that Trump appointed voted against him! Some small justice!

Good observation. I bet they grit their teeth.

The court filing link is not a transcript. Does it say anything about Eric and Allen bleating out ‘Take the 5th, take the 5th’?

That isn't how such documents work but you get an inkling on page 14, article 39.

Thanks, hadn’t opened the other link (Fifth Amendment) before. Have to agree with Ms. James team;
New York Attorney General Letitia James’ office argues that these instances demonstrate that the men were aware of potential criminal liability in the case.