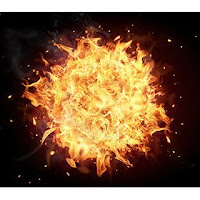 Yesterday, a man in De Luz reported seeing three energy balls that looked human on Next Door. He included some fuzzy pictures. He was predictably ridiculed for seeing aliens and the like. I wrote a comment that linked to this old blogpost of mine, Takwik which is a link to an even earlier 2011 blogpost titled Fat heads, the angel of death and other strange phenomena.

For while white men have seen the same phenomenon going back to the late 19th century at least, the local natives believe that it is the manifestation of their balancing spirit, Tacuic, who can appear either as a man or a ball of fire.

And I once, in the company of my ex wife and a friend, actually saw it myself. Honestly the most powerful and incredible thing I have ever seen in my life.

Next Door took the man's comment down, for some unknown reason. Can't ruffle feathers, I guess.

For more on local lore and rituals, read my old blog Devil's snare.