There's an interesting opinion at the WaPo today, Joe Manchin finally admits that he favors minority rule. Sounds a bit strident but probably accurate. And so the Voting Rights Act and election reform dies an unseemly death.

Sinema and Manchin put on a public show of pining for the ideal of bi-partisanship but as we have seen, these days it tends to be a one way street where the dems do all the giving. All these holdouts are really doing is protecting the status quo. 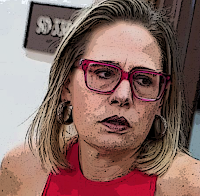 Anyway I am not going to draw this out but will say that I think that Sinema's political career is officially kaput. Toast. Because she now finds herself without a base.

The one time Green Party progressive, who was elected by liberals, has turned her back on her constituents, sold out to the big money interests and she finds herself on an island without ideological friends of any kind. As I said a few months ago, some times you might even need an ally or two.

She is now reduced to a useful idiot for the opposition. Emily's List cut the cord with her this week. More to follow.

In the long run she didn't stand for anything. And she knifed her fellow democrats in the back in the process. Took the money and ran (as did her aides apparently.)

I think Manchin is a different story in heavily red West Virginia. He has never had a liberal ideology, he's a known quantity good old boy. Arizona is pretty purple. And I don't see Republicans crossing the lines there to vote for her when there are more crazy people on the far right to take her place. I would say she is now toast and can take some fat cat lobbying job for some patrician coffers that she has enriched.

Should be a textbook example of what happens when you alienate your base and throw a wrench in to the machinery so that nothing can get done. It pisses people off and they remember. You had your chance Kristen and you will not be missed.

I think there is merit in keeping the filibuster. A sixty plurality insures bipartisan and that is a good thing.

Except it is not bipartisan and has not been for decades, what it is is minority rule.

She is not a californian. I'm sure she has an even stronger Arizona base now.

Would be a fun wager. I think they are much more inclined to pick a Kelly Ward or Paul Gosar type.