I am not a religious person. Probably not a very spiritual person either come to think of it. What am I? Who the hell knows? Let me know if you figure it out. I can't. I like the golden rule part and then everything else seems to get a little blurry.

I knew a bio-ethics professor at Stanford once who said that if hell does not exist it would have to be created or people in our society would start eating each other. I think he was on to something. Without an occasional smiting or two the whole place goes to crap.

Anyway, not being a belief system sort of guy, I have to be careful because many of the people I love are people of intense faith and I don't want to make any of them uncomfortable through my skepticism that sometimes might seem as bordering on outright hostility.

Please. Some of you might genuflect to the Trix Rabbit in the morning, or worship Wink Martindale, that is your right and prerogative. Except for a very brief period in my life where I was probably trying to sleep off some exotic foreign substance, I never was able to fully surrender to the faith thing. You people are very lucky, seriously. Wish I could go there but I have this rational shadow that keeps whispering bullshit in my ear whenever I seem to get close.

In any case, if religion is your thing, I support you and am happy for you. I defend your right to have any relationship with the almighty you can muster.

But I do have a few reservations on the subject I would like to share with you. Because, after all, we all share the same planet and we all need to have a little give and take in order to respect each other's pov. And we should have one set of rules. 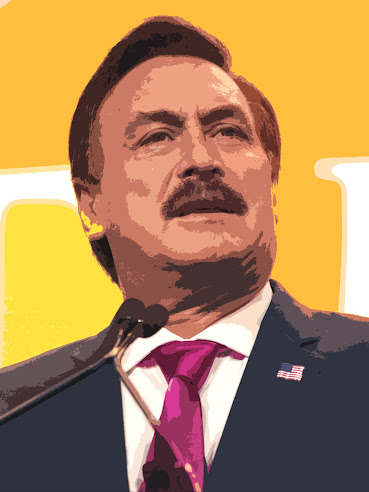 Mike Lindell sued the January 6 panel requesting his phone records because he argues that his false claims of massive fraud in the 2020 election have a "scriptural basis."
Now this is a slippery slope that I don't think he should be allowed to embrace.

The suit contends that Lindell's promotion of the false fraud claims were "are motivated, in part, by his strongly held religious beliefs," noting that Lindell has said there is an unspecified "scriptural basis for" the claims.

"Mr. Lindell's activities are widely known," the suit states. "His speeches and publications regularly articulate his religious belief and the scriptural basis for it. He regularly associates with others holding similar religious beliefs to organize 2020 election integrity activities."

Mike, just because you think the bible gives you carte blanche in such matters does not mean that you can defame other people and get away with it.  God told me I could do it is not your get out of jail free card, or shouldn't be anyway. An "unspecified scriptural basis" for your prevarications just ain't going to cut it, at least not in my church.

While you are entitled to whatever belief system you may have, it does not trump other people's rights and due process and I don't think we really want our judges evaluating your understanding of what scripture says in order to determine your relative innocence or guilt. Don't use god, or Jesus, or Moses or Buddha as a cover so that you can be an asshole and slander people.

Of course, this Supreme Court goes out of its way to grant religious folks special privileges in the guise of "religious freedom." The upcoming rulings on religious exemptions for covid mandates should be quite edifying as will the rulings on hanging christian flags at government buildings.

Some people are even talking about establishing official state religions. Michael Flynn, former President Trump’s National Security Advisor, is calling for us to have “one religion” in the U.S., Christianity. And there is a case before the court which is threatening to make the public pay for private religious school education in Maine. We are becoming more and more like Pakistan or Afghanistan, this road that we are embarking on.

Is it fair to equate shopping for basic foodstuffs with congregating in a religious setting? I am not going to answer the question, I have an opinion about the comparable necessity of the two activities but it doesn't really matter what I think, does it? You can pray at home but it is a little harder to shop at home.

We need to have mutual respect, both the godless and the god fearing, but you have no right to get others sick, or destroy the environment, or lie about somebody's voting machines, because you think god told you it was okay. I respect your rights to your beliefs and opinions but don't force me to buy in.