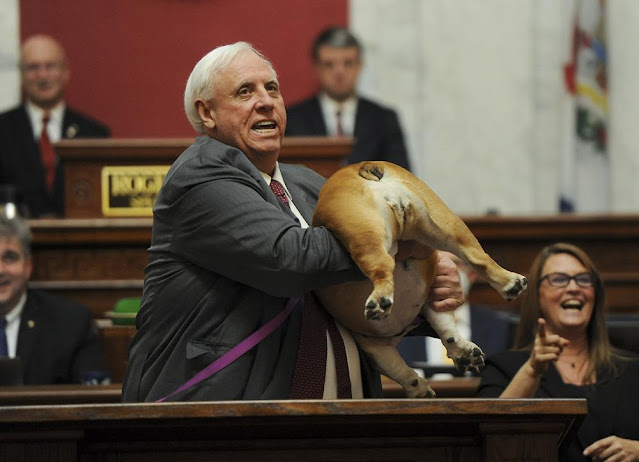 I was driving the other day when a young man in a Toyota truck started aggressively moving in and out of lanes. When he flew by me I saw two bumper stickers blazoned on his window, Let's go Brandon and Fuck your Prius. I suppose that I could should have guessed his political inclinations from the selfish and angry way he was driving.

I understand that the Brandon slogan is quite fashionable right now, sounds rather stupid to me but that is just me, in any case the second one seemed rather course coarse and an unusually hostile thing to put on your car. I know that some Prius drivers are obnoxious but no worse than your average Civic or Audi driver, at least in my opinion. It mainly suggested that the driver of said car, was immature, stupid or excessively hostile or perhaps a combination of the three. The trifecta. 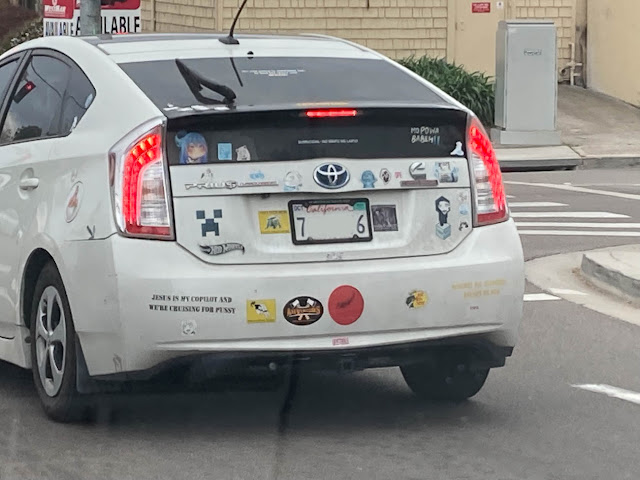 A little while later this car drove by.
Coincidentally, a Prius but presumably not the focus of the previous driver's ire.

Now I am no prude or even a religious person but I find the sentiments expressed bottom left to be in exceedingly poor taste.

And if you haven't noticed, boundaries of decency and morals are eroding on a daily basis, hence we have Governors standing up and comparing their political targets to his dog's asshole, like Jim Justice from West Virginia does in the top photograph. Juvenile and ridiculous.

The political camps have never been farther apart but what is unusual is that in the old days, there was a center position and an attempt on both sides to find some fulcrum of moral foundation to rest their opinion on.  We no longer have a shared, or common sense of common sense, or decency for that matter.

No more, now, with twin media machines, the right and left no longer even attempt to talk to each other, just past each other, in the most vulgar of terms. The combat has become much fiercer and laced with threats of violence and antagonism. From antifa to proud boys, across the political spectrum, people are stepping way beyond previous standards of propriety. We have plainly lost our bedrock, our sense of right and wrong.

I was just on the local NextDoor pages and the vaccine debate got so heavy that the post I was following was expunged, but not before the battle lines were drawn and people showed their cards. I got some pretty strong messages, one private, from some retired cops and military, evangelical but definitely pointed.

And I have to wonder, how much of the schism is ideological and how much is generational? Look at the Joe Rogan / Neil Young kerfuffle. How many millennials listen to Neil Young or have even heard of Joni Mitchell? Not near as many as listen to the tatted up ex brawler Rogan, the most popular podcaster in the world at present. The world we have inhabited is changing and so is the value system. And many people lack the discriminatory tools cognitively to fairly evaluate both information and misinformation. Hence the Q and Pizzagate notions.

I am a late sixties, early seventies kid, that is the time period where my personal ethos was forged. Tried to do the righteous hippie thing, as best I could. In my day, a male with long hair, such as I had, meant that you tended to share a value system that was for all intents liberal if not radical.

Not always, you might see long haired right wingers at a Hell's Angels rally or at a Skynyrd concert, perhaps the guy who changed your tires at the garage with the greasy locks and the hairbrush in his pocket.

But mostly you could figure that you had a shared world view with long haired people once upon a time. One would be foolish to make that assumption today. 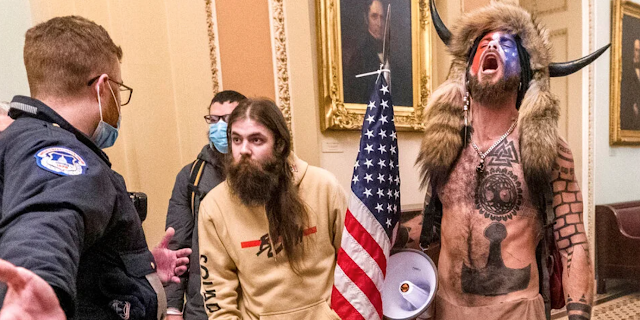 These people are just as apt today to be MAGA loving reactionaries.
So you have to be cautious today regarding who you are breaking bread with or even sharing a bong rip, especially if the fecal matter is ready to hit the twisting propeller.  Everything has been turned on its head. Things are getting uglier and uglier, the least of which is human decency and comportment. Perhaps the kids are not alright?
Posted by Blue Heron at 2:22 PM