The President wants to know why a fifteen year old girl didn't got to the police or FBI thirty six years ago to report an alleged sexual assault by a seventeen year old boy. 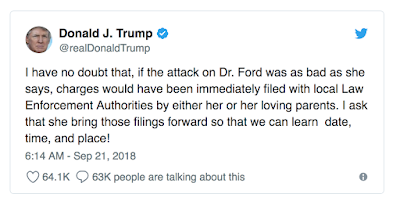 Vox has an interesting graphic today from a 2014 study. 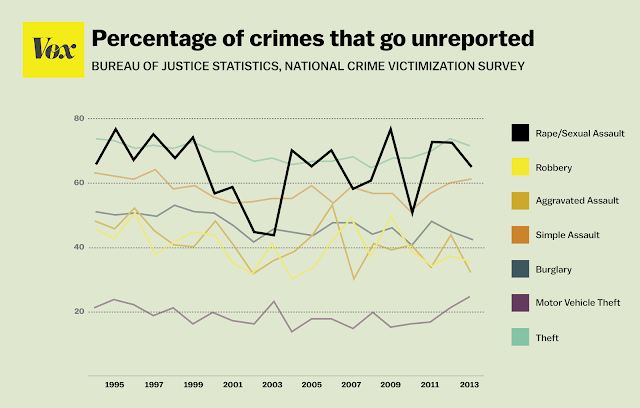 Over two thirds of sexual assault and rape claims go unreported, the highest rate for any criminal category. Could this be because the victims are often doubly victimized after reporting these craven acts? Of course the President doesn't think it was as bad as she says, because he has admitted to far worse. But I can imagine her hesitation, all of my clumsy gropes of adolescence, I never put my hand over a girl's mouth or scared anybody, as is alleged here.

*
The upcoming hearing should be a real dog and pony show or kabuki theater number. All scripted out, no corroborating witnesses allowed. Interesting that the lead counsel for the Senate Judiciary Committee, Mike Davis, is tweeting (since deleted) that Kavanaugh will be confirmed, as is McConnell. Could it be that this thing is in the bag already?

Why go through all the motions if the fix is already in?
Posted by Blue Heron at 11:56 AM

I am not so sure that the fix is in... I think there is a possibility of at least a couple of the R Senators balking on Kavanaugh. I give it a 50 / 50 chance that Mr. K will not make it.