Good for the goose 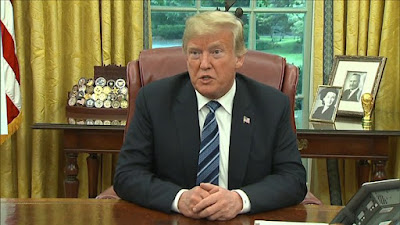 You know, pending a coup or a Putin style President for Life bid, Donald Trump's reign will not be forever.

While a small fraction of his legacy can probably never, ever be repaired, principally his destructive environmental policies, he will be largely remembered as a blip on our body politic, a nasty but thankfully temporary Nixonian cyst on the ass of America. The nadir of our recent national existence.

We are a resilient nation. We got through the Civil War. We can survive this asshole.

I do not want to impeach the man. I want to see his tax returns and I want the congressional investigations to start. I would like his unraveling and destruction to be both slow and immensely painful. Impeachment is too quick, he needs to suffer for a while.

Let's see what really happened with Trump/Russian money laundering and Deutsche Bank. Zervos, Daniels and McDougal. And the extent of the Russia collusion. Let's put both Don Jr. and Sessions under oath and see if they were lying about the Trump Tower meeting. Throw some people in jail, including family members.

This House is so funny, 100 Benghazi investigations during the Obama presidency but not one measly House Oversight investigation of Trump. What was the quote from the GOP congressman "We didn't come to Washington to investigate Republicans" or something along those lines?

In any case you have to wonder about what has been lost in this Presidency? Can you imagine what the GOP would be doing if a Democratic President did the same things the Donald is doing? Emoluments, tax returns, self dealing, lying, race baiting, grab their pussies, the nice nazis, neutering the CFPB, treating Puerto Rico like a plantation, picking fights with good allies on trade, screwing our farmers with tariffs. Not to mention trying to use the Justice Department as a tool to go after his political enemies. They would be apoplectic.

But Trump somehow gets a pass. 90% of the GOP loves him for all of his putrid stench. Because he is getting their agenda enacted and he has now hand picked a Federalist Society judge that will both overturn Roe v. Wade and keep him from being indicted. So except for a small handful of retirees they largely keep their mouths shut and look the other way.

You have to wonder if the Republicans will demand a return to the pre-Trump status quo and old school ethical normalcy when this horrible little experiment is over and when and if the shoe is ever on the other foot? I would tell Mitch and his buddies to pound sand. Pack the Supreme Court with umpteen liberal judges and give them a dose of their own medicine. Karma is a bitch.
Posted by Blue Heron at 6:35 PM

I would like to see the Great Castigation come out of the November election, but I don't know. The hurricane is off the coast and rated at Category 4 but no one knows if it will lose power when the real election happens. Up to now all the evil has been the problem of Republicans. If Democrats get one or both Congressional houses we could see two years of gridlock with investigations everywhere. Will the public get upset with nothing getting done and blame both sides then? I keep thinking that we are in a time in which we do not understand and for which no one has good solutions yet. I hope I am wrong and it is just a simple matter of Republicans fucking up. If only I could get rid of my memories of Democrats fucking up: "I'm with Her".