Neither an art dealer nor army can march on an empty stomach. Leslie and I just came back from an early dinner at Panca, the casual but excellent Peruvian restaurant in Oceanside. It was our third time at the establishment, Doug and Retha first took me there for lunch about five years ago. 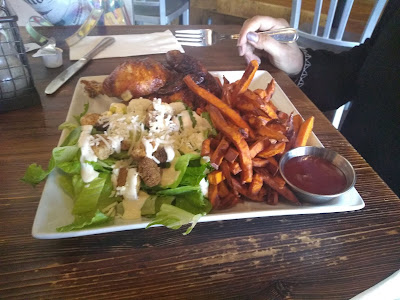 I have been jonesing for their rotisserie chicken for some time. Hadn't been there since brother John was last in town. Some of the best roast chicken around although tonight's version did not quite equal the sublime perfection of our last visit. 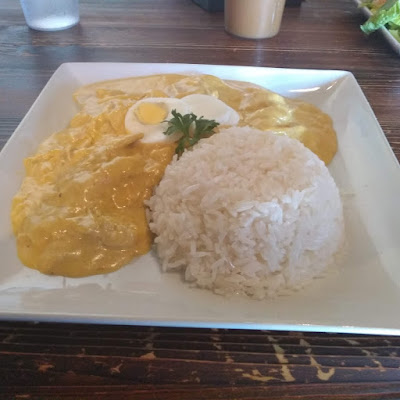 There is something about the South American flavor set I find so fresh, different and enchanting. Tonight Leslie had the half chicken with sweet potato fries and a delicious salad.

For my entree I had aji de gallina, shredded chicken in a cream sauce made with parmesan, yellow peppers, potatoes and pecans. This was served with a mound of moist rice with slices of boiled egg on top of the dish. Looks rather monochromatic but tasted colorful enough in my stomach.

So wonderful I slowed down my eating tempo considerably so that I had more time to savor every bite.  Of course we shared from each other's plates as well.

The more South American food I eat, the more I want to try. The piquant flavors have no corollary in our normal fare. My exposure has been admittedly pretty limited. When I worked in Beverly Hills many moons ago I frequented an excellent Argentinian place that had about thirty different empanadas. Loved the place. Later I tried Q'ero in Encinitas, a more formal and expensive Peruvian restaurant and remember being dazzled by their pork shoulder with aji amarillo.

I do eat a lot of Guatemalan food but that country is located in Central America, a little farther north. We recently ventured into Brazilian cuisine in Encinitas at Sabor de Vida which was quite good but not quite as delicious to my personal tastebuds as Panca. More beef oriented.

When I went to Houston I was smitten with Colombian food, but the empanadas were deep fried instead of baked and not nearly as good. But I loved the places I found, the food, alcohol, music, laughter and spirit. Very fun people those Colombians, not to mention very beautiful. I think there is only one Colombian dining place in San Diego and it is in a tough neighborhood down by Imperial Ave. Still need to check it out.

Panca now has a sister establishment called Tambo Cafe at the other end of the small strip center. They sell empanadas, sanguches, pasteles and desserts amongst other things over the counter. We left with a very tasty but expensive piece of key lime pie which we just now devoured. Check out their website, very fun. They specialize in serving the traditional Peruvian Lonche "too late for lunch, too early for dinner."

I recommend that you try Panca. I want to try to work my way through the whole menu, minus the guinea pig, of course. Next time I will probably go for the lamb stew or maybe the antichucos, tender pieces of beef heart marinated in Peruvian spices, skewered, and served with a side of Peruvian corn, Salsa Criolla and grilled potato.

Place is spartan but who cares?

*
Can't find a great posole around here. Well not like the great street posole I used to get in Oaxaca anyway, the clear "blanco" or "verde" versions with chicken or pork, hominy cabbage, chile and assorted spices including lots of Mexican oregano, cumin and coriander. I was actually introduced to the dish in the mid 1970's by a Guamanian man named Eddie Gomez whose wife now ex wife, made the best clear version.

Raymond told me to try Las Brisas. I went yesterday and it turns out they don't serve it there either. Aydees has a red version that is more of a stew and it just doesn't hit the perfect savory spot for me.

Hispanics love Las Brisas. When I did my twenty two Mexican restaurant review many years ago, it polled highest amongst many I knew. It just doesn't do it for me.

I am not a Las Brisas person. Or an Estrellas guy. I am a Rosa's man. Las Brisas has always had a funny smell, to my nose anyway. They brought me a basket with a few stale corn chips. I ordered the shredded beef tacos. They smelled too as did the spicy sauce. Everybody else was eating it up, just wasn't my thing. Tacos were gamey. I want shredded beef to be crispy, not pasty glop. Awful. Will be hard to go back. 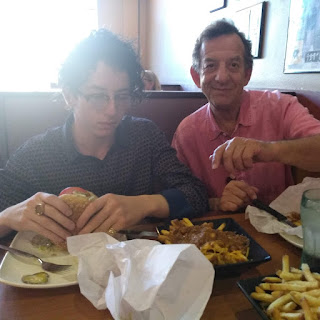 I took the Steinbergs (or at least three of them) to Chili Coast Burgers in Vista for a char broiled chili the other night. Messy but good. Way too many fries. Washed it down with an icy cold root beer.

Times you got to live a little. Workingman's establishment, still my favorite North County burger. The thought of living life without an occasional half pound chili cheeseburger is almost unthinkable. Don picked up the check. Thanks.

People are hammering Chili Coast pretty hard on Yelp. I still think it is great, love their burgers, love their fries. Did have some serious indigestion, sign of a great burger experience.

Restaurant was started by a guy I did Kung Fu with decades ago, Ralph. Long gone, now on owner number three. They do a nice job.