Leslie and I spent the afternoon together yesterday. She needed to buy some supplies at Farkas downtown and I wanted to stop by Point Loma and bird a little bit.

We were famished so we stopped on Convoy to eat. We went to Spicy City, a Szechuan/Yunnan oriented Chinese restaurant that many cognoscenti consider the best in San Diego. The cool thing about this place, or one of the cool things anyway, is that they have a cold bar with pickles, bamboo, cold smoked chicken and other stuff near the register that is just heavenly. They allow you to pick three or four free items I think. Very tasty, quite addictive. 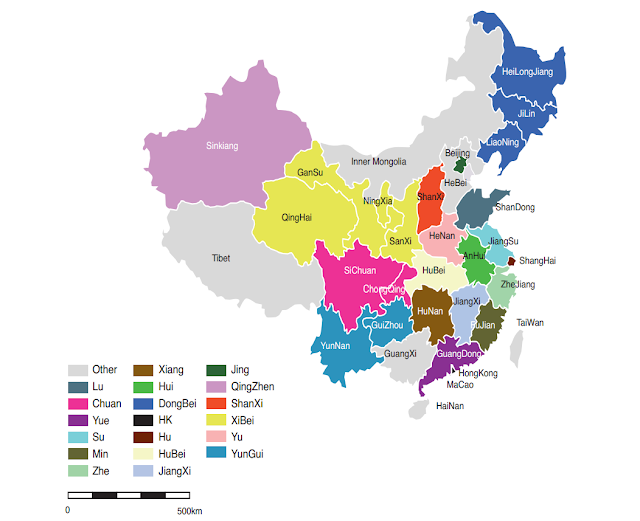 Everything else about Spicy City is hot as in spicy. They don't lie. Leslie loves it but I often have to ask her to tone it down for my tender palette.  Yunnan or Hunan and Szechuan are both hot cuisines but the former tends to be hotter and drier than Szechuan. Szechuan or Sichuan is known for its numbing or tingling flavor, called Mala. Hunnan or Yunnan tends to be a simpler cuisine known as Ganla, gan meaning hot, la meaning dry. Pure heat.

When I was a young boy in New York Hunan was just coming into vogue but it is not so easy finding a restaurant serving this delicious cuisine anymore, at least where I currently live. Can't find decent snails in black bean sauce around these parts either.

People talk about four and then eight popular Chinese cuisines. There are actually many more when you break down the individual city cuisines. Last I heard it was more like nineteen.

We started our meal with the always delicious sizzling shrimp plate with rice krispie squares and vegetables. Yunan duck was superb but we had to ask them to take it off the fire so it wouldn't overcook. Woman slightly burned her hand sticking a bowl in the burner to quench the flames and I felt bad.

Finished things off with the xiao long bao special, my beloved soup dumplings, which were especially phenomenal as well as generous for $8.95  and then had them prepare us some cumin lamb to take home. That can get so spicy that it becomes uncomfortable for me. Washed it all down with oolong tea.

I had a great picture of the table but Leslie didn't like it and erased it. The nerve.

A couple of hispanic women came in and sat down behind us. Ordered beef chow mein. The horror. The staff looked at them funny as did I. I let them know very nicely that they were in a culinary temple. Would they order a taco in a french restaurant? Of course not. I encouraged them to really check out the menu next time. They said that they would. I know, I know, I'm such a busy body food nazi. But they obviously needed direction.